On Aug. 15 my testimony was to make sure you were aware of an August 16 Senate Education Committee Meeting in Austin and the need for a Comprehensive District Privacy plan.
I want to encourage you to read this article which addresses the real privacy issues our children face in the classroom. http://theconversation.com/how-companies-learn-what-children-secretly-want-63178
Interestingly, the next Senate Education Committee hearings are scheduled for Sept. 13th and 14th. Their interim charges will cover the very issues I have been warning about.
Here is a link to the audio archive of ALL of the Argyle School Board Meeting Public Testimony on Aug. 15, including my testimony and that of Argyle High School Principal James Hill and AP/Dual Credit History teacher Sharon Romero.
On August 16th I did testify in Austin at the Senate Education committee hearing. Here is a link to my personal testimony:

In an email from Middle School Principal Scott Gibson, addressed to myself, with you CC’d, he stated that a “goal for AISD has to do with character. This is goal number eight. Not teaching attitudes, values and beliefs directly contradicts what our school board has put in place for administrators. We teach the ‘whole child,’ not just the subject in the class.”

First, I would like to know if the goals of the Argyle Strategic Plan have already been set and the Aug. 30th forum is simply to get buy in from the community? If so, that is known as a delphi technique. It is not true community engagement if you have a preplanned outcome,  that has already been set by the Superintendent, Administration and School Board directed through the professional development from the Texas Association of School Administrators (TASA) and the Texas Association of School Boards (TASB).

Second, Mr. Gibson mentioned that a part of the AISD strategic plan is to teach the “Whole Child” and that includes attitudes, values, beliefs and behaviors. I do not see this goal on the Cambridge Plan presented in the April 18th board documents. Have you, as a board, already approved the goals that Mr. Gibson is referring to, or is this a previous district plan?

I would like to let you know that the “Whole child” concept comes from the Association for Supervision and Curriculum Development (ASCD) a global organization which developed the  Whole Child program.   This is aligning Argyle ISD with a “global” organization. This must be vetted out and understood clearly before we as a district align ourselves to a global organization who possibly, has the ability to collect data on students and teachers in our schools.  As stated on the ASCD website….

“ASCD’s Whole Child approach is an effort to transition from a focus on narrowly defined academic achievement to one that promotes the long-term development and success of all children.”

If Argyle ISD is now going to transition from academic achievement to teaching attitudes, values, beliefs and behaviors; as a parent, I want to know whose attitudes values beliefs and behaviors? What daily assignments, quizzes and assessments are going to be used to modify and intervene, therefore adapting the students attitudes, values beliefs and behaviors that will be assessed by the state in the Next Generation of Assessments and Accountability system?  Knowing that a quiz was given in an AP/Dual Credit English class that caused students to question their religious faith, as well as issues which are not, in my opinion, the role of the school district, I have great concern with this strategic goal.

In addition,  Argyle High School Principal Mr. Hill, during the Public testimony on Aug. 15th (linked above) indicated he was supportive of the Districts of Innovation “DOI” opportunity presented in HB1842. He stated that this was about local control and not having “Common Core,” and that his job was to teach the “whole child” to prepare them to be College and Career Ready. The facts show that DOI is a direct alignment with the new federal mandates and is NOT, in fact, local control.

It clearly states in  HB1842 State legislation re DOI that districts are NOT exempt from State and federal assessments mandated by the Every Student Succeeds Act (ESSA,) which was passed in Dec. 2015.

ESSA requires assessments to be developed to the extent practicable, using the principles of universal design for learning (UDL). That is a significant restriction on the kinds of tests schools can use. As stated in this article: Psychological Profiling Students in New Hampshire Schools

UDL measures “higher order thinking skills.” While that may sound good, the practice may be one parents, or even school administrators, want to avoid. http://www.eschoolnews.com/2015/05/19/udl-personalized-939/
Higher-order thinking skills have little to do with factual academic knowledge. These assessments will measure, in a subjective way, skills such as critical, logical, reflective, metacognitive, and creative thinking. These are now embedded in computerized programs that map and analyze a child’s brain function.
This means they will be measuring a student’s non-cognitive dispositions, attributes and mindsets. The focus on academic knowledge becomes secondary to these so-called higher order-thinking skills.
http://childrenthinkingskills.blogspot.com/p/high-order-of-thinking-skills.html

This metacognitive/mindsets/higher-order-thinking-skills spectrum is exactly what many parents do not want schools to measure on a “standardized test. “This is also often cited as a complaint by parents due to the subjective nature when measuring their child’s values or attitudes.”

As seen in this short video, James Pellegrino stated during the Next Generation of Assessments and Accountably meetings; if you don’t assess “critical thinking” teachers won’t teach it. https://www.facebook.com/AliceL.Linahan/videos/263751717308261/?pnref=story

So, let’s be clear, when I testified on Aug. 3rd, and then again on Aug. 16th, this was not an attack on an Argyle teacher.

I clearly stated in my testimony……….

“It is not necessarily the teacher who should be held accountable, ultimately the Superintendent and locally elected school board should be held accountable, as they are aligning with the Texas Association of School Administrators (TASA) and the Texas Association of School Boards (TASB)’s new vision for Public Education, which was the pilot program for the Next Generation of Assessments and Accountability, that will replace the invalid STAAR End of Course (EOC)s. And, legislators themselves  should be held accountable for allowing, through a coordinated effort of the passage of legislation, enabling the alignment to the UNCONSTITUTIONAL Federal mandates of the Workforce Innovation and Opportunity Act (WIOA) and the Every Student Success Act (ESSA), College and Career Readiness /Common Core NATIONAL Standards to drive what is being taught, or NOT taught, to our children in schools across Texas.”

I hope you will take the time to listen to the following testimonies from Aug. 16th at the Senate Education Committee. The blessing is, I was not alone. 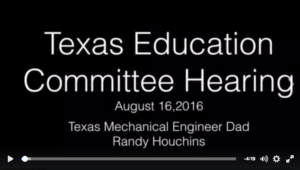 Please take note of what Principal Scott Gibson stated in his e-mail to me about his theory as to why the Senate Committee did not ask me any questions on Aug. 3:

“You mentioned that the senate panel asked no questions.  My theory is that you took too long and were not respectful of their time.  Another is that they don’t find merit in your arguments.  Another is that you tried to talk about so many different things…..values, attitudes, and beliefs to changing our world view…..”transdisciplinary”…..outcome based…..college and career ready…..21st century learning…..knowledge based…..nationalism to globalism……to some French word meaning state directed economy.”

The flaw in Mr. Gibson’s theory is he does not have all the facts, which is the same flaw in how our children are now being taught in the classroom. If you do not have all the facts, you can not “critically think.”  Has Mr. Gibson read the 1061 page ESSA law? Has he or Mr. Hill read TX HB1842 that brought in DOI?  Does he know where the concept of “Whole Child” came from and the “Global” intent behind it? Has he done the research on how “Transdisiplinary” is actually being used in 21st Century Learning and the Common Core alignment?

Fact #1 there was a 2 min. time limit for each personal who testified and many legislators were coming in and out because it was the lunch hour.

Fact #2 The Senate Committee, during my Aug. 16th testimony, must’ve found some merit to my arguments, as they engaged with thoughtful questioning, and are now looking into the information I, and fellow parents, have presented.

Fact #3 Parents, Teachers and Tax Payers clearly understood my testimony.  As of now my August 3rd testimony has over 43K views and has been shared 1,441 times with out any media coverage.  Parents know we send OUR children to school to learn to read, write, do mathematics and learn fact based history.

Finally, when schools believe it is their job to teach the “whole child,” this is a clear violation of the rights of parents. When a parent attempts to question the validity of a quiz at a school board meeting, and is met with not only Sharon Romero, but also students she has brought along for a coordinated attack on that parent, we have a problem. Are parents, one law at a time, one regulation at a time, one board meeting at a time being forced out via “education?” Schools call it teaching the “whole child,” I call it a Parental Rights Violation. And regardless of people like Sharon Romero, parents are beginning to stand up and say NO!

The amazing thing is- we had social and emotional learning back when I was in school. Although schools didn’t need a grant for a program or the latest education fad.  We just had great teachers who taught us how to read, write and do math. We did not need grit and perseverance to do math. We needed grit and perseverance to run that mile, or to earn that spot on the high kick line for the Friday night football game.  Life was just about plain old common sense. Kids were allowed to be kids and teachers were allowed to teach.

That is what I want for my kids.

Thank you for your time,