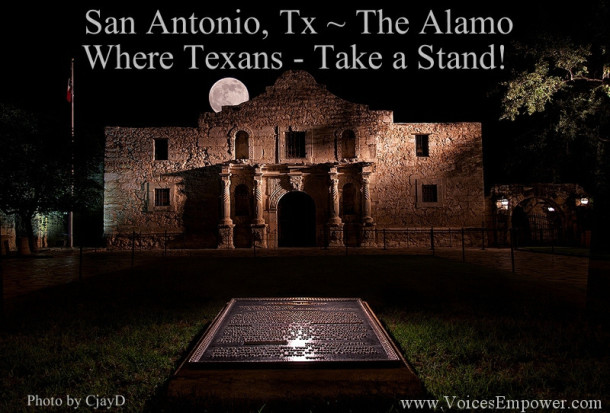 As I read an article  by (State Board of Education) member Ken Mercer of San Antonio I am reminded of another strong man named Travis, who pinned a letter from San Antonio. Below I will share both with you.

In front of the former Mission San Antonio de Valero lies a plaque commemorating the famous letter penned by Lt. Col William Barrett Travis prior to the Alamo’s siege by the Mexican army.

To the People of Texas & All Americans in the World—

I am besieged, by a thousand or more of the Mexicans under Santa Anna — I have sustained a continual Bombardment & cannonade for 24 hours & have not lost a man — The enemy has demanded a surrender at discretion, otherwise, the garrison are to be put to the sword, if the fort is taken — I have answered the demand with a cannon shot, & our flag still waves proudly from the walls — I shall never surrender or retreat. Then, I call on you in the name of Liberty, of patriotism & everything dear to the American character, to come to our aid, with all dispatch — The enemy is receiving reinforcements daily & will no doubt increase to three or four thousand in four or five days. If this call is neglected, I am determined to sustain myself as long as possible & die like a soldier who never forgets what is due to his own honor & that of his country — Victory or Death.

P. S. The Lord is on our side — When the enemy appeared in sight we had not three bushels of corn — We have since found in deserted houses 80 or 90 bushels and got into the walls 20 or 30 head of Beeves.

Today I am reporting battles still continue in San Antonio……

by SBOE (State Board of Education) Ken Mercer 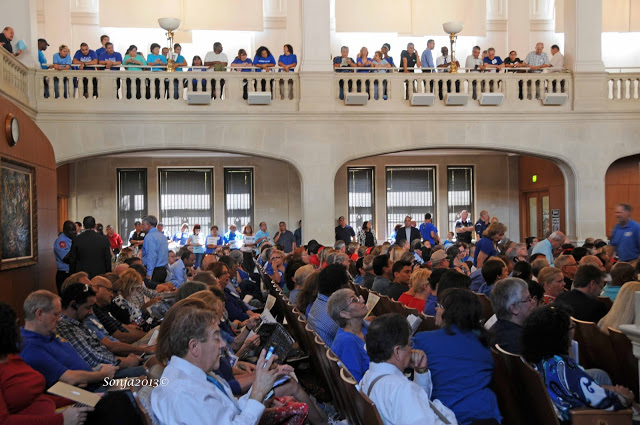 The City Council of San Antonio, led by Councilman Diego Bernal and supported by Mayor Julian Castro, will vote on a “comprehensive and expanded non-discrimination policy” to add “sexual orientation, gender identity and veteran status” as protected classes.

Adding “veteran status” is a shameful political tactic to imply a vote against the ordinance is a vote against veterans.  Our military families should be outraged.

Of particular concern, the non-discrimination ordinance, know as NDO, includes the new politically correct term “gender identity.”  Gender identity means “a gender-related identity, appearance, expression or behavior of an individual, regardless of the individual’s assigned sex at birth.”

Eighteen months ago, Liberty Counsel defended Natalie Johnson, a young African-American female employee of a San Antonio Macy’s store.  She was terminated for refusing to allow a male to have continued access to a female dressing room.  Even though Johnson cited her religious beliefs and values, Macy’s management claimed she discriminated against the biological male customer on the basis of gender identity.

Do city council members believe: “If he says he is woman, he is a woman and should be allowed access to female-only facilities?”  If the NDO passes, child molesters and sexual deviants will love this ordinance.

By the way, there is a new gender identity being promoted by the far left defined as Minor Attracted Persons (MAP).  MAP supporters believe it is politically incorrect to use terms such as “child molester,” “pedophile,” “child predator,” or “pervert.”  Instead MAP’s goal is to normalize and decriminalize pedophilia.  May God help our children.

On August 13, 2013, Gov. Jerry Brown (D-California) signed legislation requiring public schools to allow male students, from pre-K to high school, to use female bathrooms, showers, locker rooms, and other facilities based on their “gender identity” and not biological sex.

Mayor Castro and Councilman Bernal, is this the future education agenda for San Antonio?

If the ordinance passes, San Antonio will have to issue a special “travel advisory” to parents of junior-high daughters who come here to participate in volleyball or basketball tournaments:

“Warning: Biological males with gender identify issues will be
allowed in the girls’ bathroom, locker rooms, and/or showers.”

Finally, this NDO is unconstitutional, violating both the First Amendment of the United States’ Constitution and the Texas Religious Freedom Act. It will force Christian employers and employees to violate both their conscience and State law, will lead to political extortion of businesses, and is a clear and purposeful “political spit in the eye” of men and women of faith.

As a Member of the 2003 Texas House, I voted for the Defense of Marriage Act for Texas. DOMA defines marriage as between one man and one woman.  Two years later 76% of Bexar County and of Texas voted for a Constitutional DOMA amendment to protect our state from political liberals who might refuse to defend and recognize traditional marriage.

If City Council wants to change the Constitution, then have the political courage to let the people vote.  Either that or we need to change our city government’s charter to “The People’s Republic of Bexar County.”

The NDO read, “No person shall be appointed to a position if the City Council finds that such person has, prior to such proposed appointment, engaged in discrimination or demonstrated a bias, by word or deed…”

The words to the NDO may change, but the all important original intent is perfectly clear.

If the NDO passes, what happens if a business or an employee political action committee supports candidates such as U.S. Senator Ted Cruz, Attorney General Greg Abbott or State Senator Donna Campbell?  Each opposes same-sex marriage and this ordinance.

What if you attend a church led by one of the over 300 Hispanic and African-American leaders who have publicly opposed the NDO?

Again, the words of the NDO may change, but the original intent is clear; it is terribly discriminatory, criminalizing religious beliefs.  This is a direct attack on religion and upon men and women of faith who believe in traditional marriage who, under this ordinance, would be branded as “haters.”

The NDO is an outrageous attack on religious freedom – a freedom which is guaranteed by our United States Constitution.  Let me close with this statement from United States Senator Ted Cruz:

“Any attempt to bar an individual from public service based on a personal religious conviction is contrary to the liberties guaranteed us under our Constitution and should be emphatically opposed. It is encouraging to see so many Texans standing up to defend their religious freedoms in light of the misguided proposal put forth by the local city council.”