There is a “Fundamental Transformation” occurring in education today. Some will say it is 21st Century Learning.
The truth is, there is nothing 21st Century about it. It is the same battle that has been fought in the past and pushed back by American PARENTS and Teachers!!

Why, because parents and teachers understood just how harmful this is to children our families and our nation.

The “SHIFT” in education is changing from a transmission of knowledge, that parents still expect from our schools to an emphasis on altering the students world-views, their values, attitudes, beliefs, and behaviors. When education is focused on how students perceive the world, that is known as Critical Theory or Cultural Marxism.

It is clearly seen in the College Board’s SAT and AP (Advanced Placement) assessments and conceptual frameworks which can be described as “Transdisiplinary” in their purpose. Transdisiplinary is when the function of the subject matter, concept themes in the syllabus, and course frameworks are all used to guide how a student views the world. The technical term most commonly used is lenses. Effectively these lenses become the values, attitudes, and beliefs the students are to be taking away from the curriculum.

It is about equalizing the American Economy in the world. You are no longer that boy from Texas who played baseball and was a Boy Scout. You are no longer a proud Texan, an American, who lives in a global economy. You are now a global citizen who happens to live in America.
Not an Individual and Not an AMERICAN. Nationalism is destroyed. Globalism is in place.

What is Common Core? The Common Core is Based on Unesco’s World Education Curriculum. In 2015 the United States signed a global goals agreement known as the Sustainable Developmental Goals (SDG)s. Education is the fourth goal globally. The choice readiness will use the education and data for our students to be one of 3 tracks: COLLEGE (leader or authority), CITIZEN (includes military as protector or authority), or WORKER. See the 2015 UN Report:

Purposes Behind Common Core and College and Career Readiness

• Testing Based Outcomes- The Common Core National Standards shifts from the “Mental” (Academics and Knowledge-Based Tests) to “Behaviors” (Performance Standards and Competency for the workforce).

• Adjustments to Ideology– Change American’s worldview from nationalism into globalism and allows for a government-controlled economy known as ”Dirigisme” or the more common use–a dirigiste economy. It means essentially a state-directed economy.

• Dismantle traditional public schools– in favor of charter-like structures (public/private partnerships) that will be forced to generate student data for global corporate profit and state control.

Parents must ask… CAN I SEE?

• Can I See WHAT DATA is being collected on my child?

• Can I See HOW my child’s DATA is being used?

• Can I See WHO is financially benefitting from the DATA collected on my child?

(3) No Child Left Behind Flexibility Waiver, (ESEA, Elementary and Secondary Education Act), that is re-training teachers to teach to Common Core. ESEA was reauthorized in Dec. 2015 and renamed (Every Student Succeeds Act (ESSA). Standards were rebranded as College and Career Readiness. This also allowed ALL children in public schools to be funded under Title I by changing the definition of who is poor or educationally deprived of anyone not meeting Common Core.

(Free and reduced lunch guidelines of 40% school-wide were dropped to 0%.) These three important points control standards and testing, curriculum, and teachers with all public school children being funded under Title I. (Source: Anita Hoge)

No Choice and No Voice

Barack Obama and Jeb Bush’s ‘Equity in Education Plan‘ for our entire country:

The vision to “fundamentally transform” education laid out the pathway to Globalization is through “School Choice.”

With “choice” comes accountability through rules and regulations by unelected bureaucrats.

Key Players Funding and Implementing the Transformation in Education are:

* Google and Microsoft are Unesco Partners with deals to promote Unesco’s values through a World Curriculum.

* The Organization for Economic Cooperation and Development (OECD) a World Policy Organization. 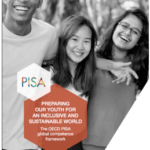 The OECD’s assessment director, Andreas Schleicher, a German worked with the Obama Administration to reshape the US K-12 online assessment system.

The OECD reshaped assessments so they run in the background of the online curriculum.

The OECD assessments are assessing behaviors more than academics.

OECD/PISA quotes from the Global Competency Framework for an Inclusive and Sustainable World :

“The skills, attitudes, and values that shape human behavior should be rethought to counter the discriminatory behaviors picked up at school and in the family. All young people should be able to challenge cultural and gender stereotypes, to reflect on the causes and solutions of racial, religious and hate violence and to help create tolerant integrated societies.”

The UNESCO Institute for Statistics is producing globally-comparable education data for the monitoring and implementation of SDG 4 and the Education 2030 agenda.

Data is needed to finance Education reform and to control.

“…investment banks pay for public services to be contracted out to private providers and stand to earn much more money than the cost of the service…The Every Student Succeeds Act [ESSA] of 2015, the latest iteration of the Elementary and Secondary Education Act of 1965, directs federal dollars to incentivize these for-profit educational endeavors significantly legitimizing and institutionalizing them.”

As laid out in the Crucial Voice…

President Obama’s Social Innovation Fund is administered by the Corporation for National and Community Service.

“…three foundations have played particularly significant roles: the Rockefeller Foundation, Bloomberg Philanthropies, and the Laura and John Arnold Foundation…. all three foundations have funded the Government Performance Lab at Harvard, established in 2011, that helps implement and expand Pay for Success initiatives. Jeffrey Liebman, who served in the Obama administration as the deputy director for policy at the OMB, runs the Harvard center.”

In Why “Pay for Success” Financing Could Cost Taxpayers More Than They Bargained For by Rachel M. Cohen, she writes…

“New Profit—a ‘venture philanthropy fund’ with a board that boasts Bain Capital executives and other investment leaders—launched an advocacy arm in 2007, innocuously named America Forward. When Barack Obama was elected president in 2008, the group recommended that his transition team establish a ‘social innovation fund.’”

We need TRUMP to STOP the FLOW of DATA!

We need Help to Expose the true nature of Cultural Marxism!

From an economic standpoint, which NO ONE IS COVERING, it is important for you to connect a dot to The Human Capital and Economic Opportunity Global Working Group (HCEO). It is run by James Heckman, Stephen Durlauf, and Robert Dugger.
The HCEO operates out of the Center for the Economics of Human Development (CEHD) at the University of Chicago, and its fiscal sponsor is the Institute for New Economic Thinking (INET), an entity that emerged in the aftermath of the global financial crisis of 2008.
INET funds research, grooms young economists, and convenes gatherings promoting the work of its 1,100+ experts. George Soros pledged $50 million from Open Society to create INET as a vehicle to explore “new thinking and new rules for the world economy. Heckman, Dugger, and Durlauf are all involved in the operations of INET.

In February 2018, economist James Heckman held a working group of social scientists to discuss new types of assessments that are being designed to capture data about children’s social-emotional traits and predict and modify the future behaviors of students.

The videos of the HCEO working group, mentioned above, can be found here: https://cehd.uchicago.edu/?page_id=1198

James Heckman worked closely with Flávio Cunha who is now a Professor of Economics at Rice University in Texas.  Together they wrote… “Estimating the Technology of Cognitive and Noncognitive Skill Formation,” a paper published in Econometrica that they wrote with Dr. Susanne M. Schennach.
During Texas’ last legislative session, Sen. Van Taylor passed Math Innovation Social Impact Bond (SIB) legislation (SB1318). Rep. Tan Parker (HB2014) carried the house bill. Knowingly or not, they are pushing George Soros’ agenda. Here is a link to Testimony on (HB2014):
Please note, in the testimony above, it is Flávio Cunha, who wrote the white paper with Heckman, that is the so-called expert and invited guest from Rice University, who is testifying for the Math innovation SIB in Texas.

“Behavioral economics is the study of how psychological, cognitive, emotional, social, and cultural factors influence the economic choices a person makes. It challenges the idea of homo economicus, that people maintain stable preferences and consistently make self-interested choices in relation to market forces. The field was popularized in the United States by Nobel-prize winning psychologist Daniel Kaheneman. University of Chicago economist Richard Thaler built upon this work. Thaler won a Nobel Prize in Economics for his research last year.
Thaler worked closely with Cass Sunstein, who headed Obama’s Office of Information and Regulatory Affairs. In 2008, they co-wrote Nudge, a book espousing “libertarian paternalism.” People make “choices,” but systems can be designed and implemented to encourage a preferred “choice,” generally one that prioritizes long-term cost-savings. “Choice architects” create these systems and weave them into public policy. Through the strategic application of “nudges,” citizens,  otherwise “irrational actors” in the market, can be guided to conform to economists’ expectations. Through nudges, human behaviors are redirected to fit mathematical equations and forecasts. David Johnson’s 2016 New Republic article Twilight of the Nudges, provides useful background on this technique and the ethical implications of applying nudges to public policy.”

QUESTION: Will the next generation of Americans actually have freedom and liberty?

REMEMBER THE DEFINITION OF “LIBERTY”… “the state of being free within society from oppressive restrictions imposed by authority on one’s way of life, behavior, or political views.”

Basically, Predictive Analytics is using mined education data to create software programs that have the ability to predict and modify the behaviors of students across America.

As stated by Yuval Harari:

“Now the question that arises today is what will happen once we create an algorithm that knows me better, that understands me and my feelings better than I can understand myself? What will happen then is that authority will shift. It will shift away from the feelings of individuals to these outside algorithms.”