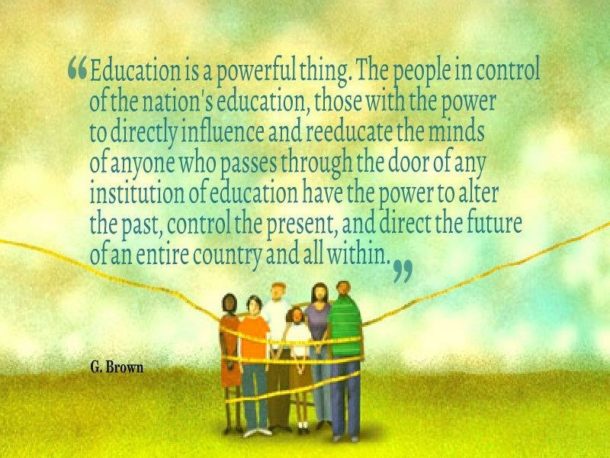 There was a Time When Kids Felt Safe: The shift to behavioral modification has deadly outcomes

In America, with freedom comes individual responsibility. Remember that as you read the information below.

There was a time when people understood the value of going to school based on their zip code.

There was a time when local community schools meant true local control with a locally elected school board.

There was a time when kids actually did love to learn in school.

What did it produce… The greatest economy in the world.

Frenchman Alexis de Tocqueville wrote about the power of a government seeking to control the individual. ‘Tocqueville’s words are alarming as we see what Education Reformers have done to education in America over the last 50+ yrs.

“It does not break wills; it softens them, bends them, and directs them; rarely does it force one to act, but it constantly opposes itself to one acting on one’s own, it does not destroy, it prevents things from being born; it does not tyrannize, it gets in the way: it curtails, it enervates, it extinguishes, it stupefies, and finally it reduces each nation to nothing more than a herd of timid and industrious animals, of which the government is the shepherd.”

Hindsight is 20-20. The first carrot of federal control of education was in 1965 when the 35 page Elementary and Secondary Education Act (ESEA) was passed. It was re-authorized in 2001 and named No Child Left Behind (NCLB) and forced education to integrate with mental ‘health’. It was championed by my TX Republican Congressman Michael Burgess, and again re-authorized in 2015, and named the Every Student Succeeds Act (ESSA). It codified into law behavioral modification and psychological profiling and tracking of students via, money following the child in the name of “school choice”. YES, the devil deceives.

While elections divide us- And, unelected bureaucrats like the Texas Commissioner of Education Mike Morath regulate us, and while America’s children are being shot in their classrooms; all of us are being controlled. How?

A system has been locked in place by both federal and state legislation. With government regulated “choice” comes accountability through rules and regulations by unelected bureaucrats.

Even if the US Department of Education is dismantled there are federal education dollars tied to mandates coming in via the Workforce Innovation and Opportunity Act (WIOA) from the Departments of HHS, Labor, Defense, and Education.

Below are the purposes of the College and Career Readiness/Common Core National Standards now codified into law through the passage of (WIOA) and the Every Student Succeed Act (ESSA).

Therefore this NEW system known as a P-20W system will now track, psychologically profile and sort students from Pre-school through the Workforce.

Eventually, any student who opts out of the P-20W system will not be able to get a job in the workforce. Competency-based credentialing begins in Pre-school with this system. Therefore, it negatively impacts a student who does not take the state or federal dollars.

When they say…
Every Student Succeeds they mean Lifelong learning so every student means EVERY American from pre-school through the workforce.

Children with learning disabilities, neurological disorders, behavioral disorders, and diagnosed mental illness are targeted for psychological manipulation, behavior modification, and chemical alteration IN THE SCHOOLS. No Child Left Behind forced education to integrate with mental ‘health’.

This made students into patients. Patients who required monitoring and interventions (a.k.a. treatments and therapy by mental & behavioral ‘health’ specialists).

All of these labeled children are now patients in the school/psychiatric institution. Most school districts employ BCBAs (Board Certified Behavior Analysts) and other mental and behavioral ‘health specialists’ to compile mounds of data on these students.

No IEP? No 504? You probably think your child is safe because he or she lacks the label.

After the ‘experts’ have analyzed the data, more plans are made, further treatment and intervention policies are created. Once created, the policies are implemented and the policies don’t just ‘support’ the mentally/emotionally/behaviorally challenged patients/students, these policies are pushed in for ‘support’ of the entire school population.

Why? Because ALL children have diverse needs that require leveled support and differentiation to meet their individual needs. ALL STUDENTS, ALL NEEDS.
(See community schools – the one-stop shop to conveniently provide services to ‘help’ your child meet the government standard of ….. acceptable child.)

The premise: The child is broken (challenged, deficient, compromised, wrong) in some way and the services offered in the school will fix (treat, mold, manipulate, twist, conform) the child to what (how) the ‘experts’ believe (want) the child should be.

As we all contemplate and try to come to grips with the mass murder at Marjory Stoneman Douglas High School in Parkland, Florida we must listen to a Dad whose daughter was murdered in her classroom. In doing so, we realize it is about keeping American children safe in their classrooms.

To do that, we must understand exactly WHY this happened.

– There has been a complete shift in education away from the focus being reading, writing, math, and history giving all students an equal opportunity at success in life. To, an education based on attitudes, values, beliefs, and modifying behaviors and achieving equal outcomes. This is what it looks like…

Do you know what the motto used by Broward’s exemplary
PROMISE Program is?

Do you know what the term “Restorative Justice” means?

“PROMISE is an acronym for Preventing Recidivism through Opportunities, Mentoring, Interventions, Support & Education.

The Washington Post reported “Teacher’s say Florida suspect’s problems started in middle school, and the system tried to help him,” Nikolas Cruz “was entrenched in the [PROMISE] process for getting students help rather than referring them to law enforcement.”

“Broward County Public Schools is committed to keeping students engaged in school and out of the Juvenile Justice System. We take great responsibility towards achieving our mission – to educating all students to reach their highest potential. We believe the potential of each of our students is worth developing, including our youth who are at risk of engaging in delinquent or criminal behaviors, and those already involved in the juvenile justice system. It is for this reason that we have invested heavily, in partnership with a number of community organizations, to provide prevention and intervention programs and wraparound services for identified youth.

Additionally, Broward County Public Schools is a learning organization that values and considers emerging research and is driven by the analysis of a body of data to inform our practices. The national research and data on school discipline is clear on a number of issues:

Exclusionary practices such as out-of-school suspension, expulsion and school-related arrests are detrimental to student success in school and in life.

School districts have a legal, and more importantly, a moral responsibility to eliminating disproportional representation of minorities, student with disabilities, and LGBT students in discipline.

Adults, in and out of school buildings – school leaders, teachers and support personnel, law enforcement, court and juvenile justice leaders, behavior health professionals, advocacy groups, policymakers, parents and students, all play an important role in addressing this issue.”

This link from the BCPS http://www.lauderdalelakes.org/DocumentCenter/Home/View/2130 is called “Building Sustainable Communities through Restorative Justice”.

It lays out the decision to use Civil Citations and Diversion alternatives to those ‘punitive measures” so that “Individualized, culturally competent delivery of restorative justice services addresses harmful incidents while allowing juveniles to make amends to their victims, communities, and families–in ways that do not sabotage their futures.”

Restorative Justice makes both the right and the left feel good, from Obama’s DOE to the so-called Conservative Texas Public Policy Foundation.

Here is a reality check!!!!

When criminal behavior goes unpunished, along with financial benefits to those drug companies who profit from a captive market of students when legislation forced education to integrate with mental ‘health’; American children are in grave danger.

One could easily question whether the National Alliance on Mental Illness (NAMI), a drug company/ psych hospital company-funded group, should have access to schools and parents. Especially, when they use a school shooting to access parents and students.

AUSTIN (KXAN) – “Two local organizations are teaming up on Saturday to empower parents to talk to their teens about mental health.

… the Austin chapter of Jack and Jill of America and the Austin chapter of NAMI are organizing an event that is designed to show parents how to address mental health topics with their teens. They say this will help encourage positive conversations that will make teens feel comfortable with talking about an issue they feel they are having.

President of Jack & Jill Austin says this event was especially inspired after the shooting at Marjory Stoneman Douglas High School where the suspected gunman was reported to have mental health issues.”

“Restorative Justice” has been moving rapidly across the country and Texas is fully embracing it. As seen on the Texas Education Agency website here.

I encourage you to listen to the important Women On The Wall Conference Call linked below.
Topic: The shift to behavioral modification has deadly outcome!  I think what you will find when you compare the learning theories of “Restorative Justice” with the community and family values in this article: Guns ‘n’ Yes Ma’m

And isn’t that the American way – With freedom, comes individual responsibility.