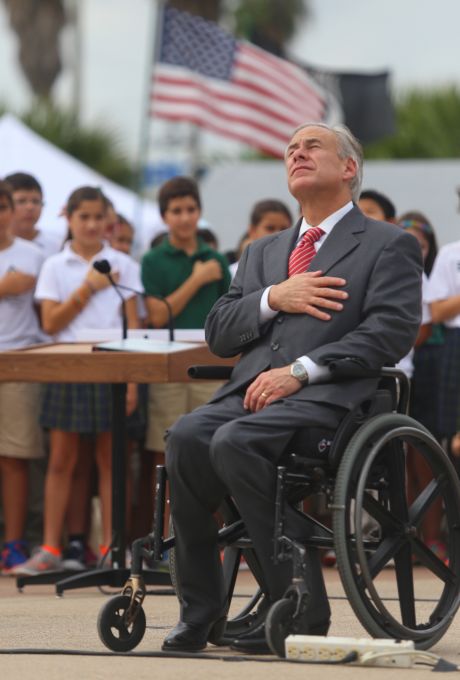 Will Gov. Abbott “FIGHT” for Our Stories to be Told and VETO SB 313?

Last week I was proud to join forces with leaders from across Texas who are doing just that. We have signed a letter sent to Gov. Greg Abbott, calling on him to veto Sen. Kel Seliger’s SB 313 which passed both the Texas House and Senate. Yet, the letter below written by Bill Ames, author of the book Texas Trounces the Left’s War on History, is a beautiful example of exactly what Dr. Terrence Moore called on us to do. Fight for America’s stories to be told.

Seventy-one years ago today, on D-Day, Allied armed forces landed on the beaches of the Normandy coast of France. Their success was one of America’s foremost historical achievements.

Today we are losing our WWII veterans at over 1000 per day. Within one generation, we will lose an important aspect of our American heritage, unless our public schools accurately tell the story of their bravery, heroism, and sacrifice.

Unfortunately, that story is in grave danger of not being told accurately, and unless the issue is addressed, our future citizens will have no understanding as to “why” anyone would make such a sacrifice.

During the summer of 2014, the College Board released a significantly revised framework of its Advanced Placement (AP) United States history course.

The revised AP history course did not reference D-Day or other military victories. Rather, it included descriptions of WWII events as follows:

“The mass mobilization of American society to supply troops for the war effort and a workforce on the home front ended the Great Depression and provided opportunities for women and minorities to improve their socioeconomic positions, and

“Wartime experiences, such as the internment of Japanese Americans, challenges to civil liberties, debates over race and segregation, and the decision to drop the atomic bomb raised questions about American values.”

On June 2, 2015, 55 distinguished scholars published an open letter to the College Board, opposing the 2014 framework.

Thankfully, the existing standards for the basic 11th grade U. S. history course (non-AP), adopted by the Texas State Board of Education in 2010, portray a positive view of our history, and includes the heroism of our military.

However, my experience in that standards development effort tells me that the Texas education establishment and its loyal media allies were extremely upset with the 2010 standards, and are salivating to rewrite state standards to conform to the College Board model.

A complicit SBOE, far less conservative than the 2010 Board, will go along.

Senator Seliger’s SB313, if signed by into law, will afford the leftists that opportunity.

2. Broad support for SBOE member Ken Mercer’s resolution, that the College Board rewrite its course to conform to state standards.

We cannot afford to allow Texas students to be indoctrinated with the false message that America is a racist, exploitative, oppressive, imperialistic country. Conservatives across the country are looking to Texas to set the standard for United States history education in public schools. Let’s not let them down.

Remember Texas did not need to pass the Common Core National Standards and Kel Seliger’s SB 313 shows clearly we are pushing towards the vision of the Common Core Philosophy of Education. If ESEA/NCLB ECAA is passed in the US Congress that is it. The last nail will have been put in the coffin of America!!

Find out in under 9 min. why Common Core is like a bunker busting bomb and the reauthorization of ESEA (Elementary and Secondary Education Act)/NCLB (No Child Left Behind) now known as ECAA (Every Child Achieve Act) is dangerous to your children and the future of America.