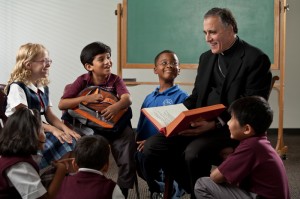 This letter was sent individually to each Catholic bishop in the United States. 132 Catholic professors signed the letter.

We are Catholic scholars who have taught for years in America’s colleges and universities. Most of us have done so for decades. A few of us have completed our time in the classroom; we are professors “emeriti.” We have all tried throughout our careers to put our intellectual gifts at the service of Christ and His Church. Most of us are parents, too, who have seen to our children’s education, much of it in Catholic schools. We are all personally and professionally devoted to Catholic education in America.

For these reasons we take this extraordinary step of addressing each of America’s Catholic bishops about the “Common Core” national reform of K-12 schooling. Over one hundred dioceses and archdioceses have decided since 2010 to implement the Common Core. We believe that, notwithstanding the good intentions of those who made these decisions, Common Core was approved too hastily and with inadequate consideration of how it would change the character and curriculum of our nation’s Catholic schools. We believe that implementing Common Core would be a grave disservice to Catholic education in America.

Why – upon what evidence and reasoning – do we take such a decisive stand against a reform that so many Catholic educators have endorsed, or at least have acquiesced in?

In this brief letter we can only summarize our evidence and sketch our reasoning. We stand ready, however, to develop these brief points as you wish. We also invite you to view the video recording of a comprehensive conference critically examining Common Core, held at the University of Notre Dame on September 9, 2013. (For a copy of the video, please contact Professor Gerard Bradley at the address above.)

News reports each day show that a lively national debate about Common Core is upon us. The early rush to adopt Common Core has been displaced by sober second looks, and widespread regrets. Several states have decided to “pause” implementation.

Others have opted out of the testing consortia associated with Common Core. Prominent educators and political leaders have declared their opposition. The national momentum behind Common Core has, quite simply, stopped. A wave of reform which recently was thought to be inevitable now isn’t. Parents of K- 12 children are leading today’s resistance to the Common Core. A great number of these parents are Catholics whose children attend Catholic schools.

Much of today’s vigorous debate focuses upon particular standards in English and math. Supporters say that Common Core will “raise academic standards.” But we find persuasive the critiques of educational experts (such as James Milgram, professor emeritus of mathematics at Stanford University, and Sandra Stotsky, professor emerita of education at the University of Arkansas) who have studied Common Core, and who judge it to be a step backwards. We endorse their judgment that this “reform” is really a radical shift in emphasis, goals, and expectations for K-12 education, with the result that Common Core-educated children will not be prepared to do authentic college work.

Even supporters of Common Core admit that it is geared to prepare children only for community-college-level studies.

No doubt many of America’s Catholic children will study in community colleges. Some will not attend college at all. This is not by itself lamentable; it all depends upon the personal vocations of those children, and what they need to learn and do in order to carry out the unique set of good works entrusted to them by Jesus. But none of that means that our Catholic grade schools and high schools should give up on maximizing the intellectual potential of every student. And every student deserves to be prepared for a life of the imagination, of the spirit, and of a deep appreciation for beauty, goodness, truth, and faith.

The judgments of Stotsky and Milgram (among many others) are supported by a host of particulars. These particulars include when algebra is to be taught, whether advanced mathematics coursework should be taught in high school, the misalignment of writing and reading standards, and whether cursive writing is to be taught.

Promoters of Common Core say that it is designed to make America’s children “college and career ready.” We instead judge Common Core to be a recipe for standardized workforce preparation. Common Core shortchanges the central goals of all sound education and surely those of Catholic education: to grow in the virtues necessary to know, love, and serve the Lord, to mature into a responsible, flourishing adult, and to contribute as a citizen to the process of responsible democratic self-government.

Common Core adopts a bottom-line, pragmatic approach to education. The heart of its philosophy is, as far as we can see, that it is a waste of resources to “over-educate” people. The basic goal of K-12 schools is to provide everyone with a modest skill set; after that, people can specialize in college – if they end up there. Truck-drivers do not need to know Huck Finn. Physicians have no use for the humanities. Only those destined to major in literature need to worry about Ulysses.

Perhaps a truck-driver needs no acquaintance with Paradise Lost to do his or her day’s work. But everyone is better off knowing Shakespeare and Euclidean geometry, and everyone is capable of it. Everyone bears the responsibility of growing in wisdom and grace and in deliberating with fellow-citizens about how we should all live together. A sound education helps each of us to do so.

The sad facts about Common Core are most visible in its reduction in the study of classic, narrative fiction in favor of “informational texts.” This is a dramatic change. It is contrary to tradition and academic studies on reading and human formation. Proponents of Common Core do not disguise their intention to transform “literacy” into a “critical” skill set, at the expense of sustained and heartfelt encounters with great works of literature.

Professor Stotsky was the chief architect of the universally-praised Massachusetts English language arts standards, which contributed greatly to that state’s educational success. She describes Common Core as an incubator of “empty skill sets . . . [that] weaken the basis of literary and cultural knowledge needed for authentic college coursework.” Rather than explore the creativity of man, the great lessons of life, tragedy, love, good and evil, the rich textures of history that underlie great works of fiction, and the tales of self-sacrifice and mercy in the works of the great writers that have shaped our cultural literacy over the centuries, Common Core reduces reading to a servile activity.

Professor Anthony Esolen, now at Providence College, has taught literature and poetry to college students for two decades. He provided testimony to a South Carolina legislative committee on the Common Core, lamenting its “cavalier contempt for great works of human art and thought, in literary form.” He further declared: “We are not programming machines. We are teaching children. We are not producing functionaries, factory-like. We are to be forming the minds and hearts of men and women.”

Thus far Common Core standards have been published for mathematics and English language arts. Related science standards have been recently released by Achieve, Inc. History standards have also been prepared by another organization. No diocese (for that matter, no state) is bound to implement these standards just by dint of having signed onto Common Core’s English and math standards. We nonetheless believe that the same financial inducements, political pressure, and misguided reforming zeal that rushed those standards towards acceptance will conspire to make acceptance of the history and science standards equally speedy – and unreflective and unfortunate.

These new standards will very likely lower expectations for students, just as the Common Core math and English standards have done. More important, however, is the likelihood that they will promote the prevailing philosophical orthodoxies in those disciplines. In science, the new standards are likely to take for granted, and inculcate students into a materialist metaphysics that is incompatible with, the spiritual realities –soul, conceptual thought, values, free choice, God– which Catholic faith presupposes. We fear, too, that the history standards will promote the easy moral relativism, tinged with a pervasive anti-religious bias, that is commonplace in collegiate history departments today.

Common Core is innocent of America’s Catholic schools’ rich tradition of helping to form children’s hearts and minds. In that tradition, education brings children to the Word of God. It provides students with a sound foundation of knowledge and sharpens their faculties of reason. It nurtures the child’s natural openness to truth and beauty, his moral goodness, and his longing for the infinite and happiness. It equips students to understand the laws of nature and to recognize the face of God in their fellow man. Education in this tradition forms men and women capable of discerning and pursuing their path in life and who stand ready to defend truth, their church, their families, and their country.

The history of Catholic education is rich in tradition and excellence. It embraces the academic inheritance of St. Anselm, St. Augustine, St. Thomas Aquinas, and Blessed John Henry Newman. In contrast to such academic rigor, the Common Core standards lack an empirical evidentiary basis and have not been field-tested anywhere. Sadly, over one hundred Catholic dioceses have set aside our teaching tradition in favor of these secular standards.

America’s bishops have compiled a remarkable record of success directing Catholic education in America, perhaps most notably St. John Neumann and the Plenary Councils of Baltimore. Parents embrace that tradition and long for adherence to it – indeed, for its renaissance. That longing reflects itself in the growing Catholic homeschool and classical-education movements and, now, in the burgeoning desire among Catholic parents for their dioceses to reject the Common Core.

Because we believe that this moment in history again calls for the intercession of each bishop, we have been made bold to impose upon your time with our judgments of Common Core.

Faithfully in Christ, we are:

Institutional Affiliations Are for Identification Purposes Only

Thomas V. Svogun
Professor of Philosophy and Administration of Justice and Chairman of the Department of Philosophy
Salve Regina University

D.C. Schindler
Associate Professor of Metaphysics and Anthropology
The John Paul II Institute for Studies on Marriage and Family

Robert A. Destro
Professor of Law & Director
The Catholic University of America