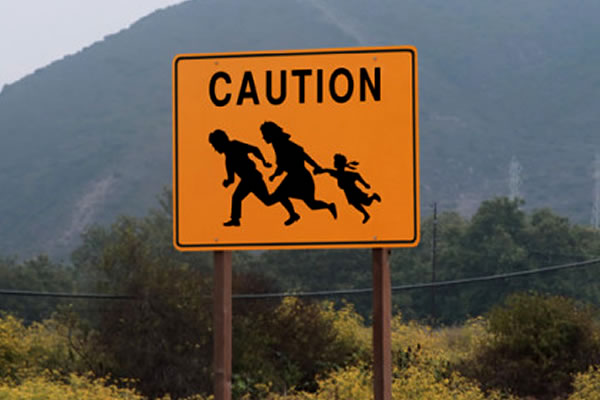 Amnesty Is Dividing the Tea Party

By George Rodriguez – Immigration reform has caused a split within the Republican Party and now it is dividing the Tea Party.

Last January, U.S. Senator Mike Lee (R-UT), a Tea Party supporter, stopped meeting with the “Gang of 8” because he disagreed with the issue “a pathway to citizenship” or what many believe is amnesty. This past Sunday, U.S. Senator Marco Rubio (R-FL), another Tea Party favorite, spoke on several news talk shows about the immigration reform bill he helped craft. He repeatedly stated that the proposed compromise legislation was not amnesty for the 11 million undocumented illegal aliens. He said it would not be a “reward”, but it will provide them with “a path to achieve citizenship”. The legislation would require undocumented immigrants to pay fines, back taxes, and to pass through a 10-year probationary period, on their “pathway to citizenship”. That sounds like amnesty.

According to the report by VOCES director Adryana Boyne, panelist Dr. Richard Land agreed that illegal aliens should register and to be law abiding citizens “so in the future they would have an opportunity to become citizens”. Again, that sounds like amnesty. Dr. Land also reportedly said the illegal immigration issue was a “moral” and “cultural” issue. If morals have anything to do with it, it is the morals of those who broke the law.

Contrary to Dr. Land’s opinion, illegal immigration is not a moral or cultural issue but a “legal” issue. It is about people who broke the law to enter the country. If morals have anything to do with it, it is about the morals of those who broke the law.

Another panelist, Ivan Andarza, is reported to have said that he had never heard any immigrant ask him about benefits. He said they always ask where they find work. He also reportedly argued that the Hispanic vote is “up for grabs” inferring that Hispanics will vote Republican or conservative based on amnesty.

I’m not sure which immigrants Andarza has been speaking to, but there are many studies that show illegals use billions of dollars in social benefits. My own personal example and experience happened two months after the death of my mother when a woman asked a family member if she could buy my mother’s social security number.

As for amnesty and Hispanic support for the GOP, the two have never been tied to each other. In 1984, Mondale won 61% of the Hispanic vote Reagan took 37% in a national landslide victory. But in 1988, two years after the amnesty, Dukakis took 69% of the Hispanic to 30% for George H.W. Bush. Amnesty didn’t help the GOP very much then and it won’t in the future.

If Tea Party leaders are going to compromise on amnesty, then conservatives are in trouble. Unless illegal entry into the U.S. is punished with permanent disqualification from citizenship, illegal immigration will continue. Conservatives and Tea Party supporters should stand firm against amnesty.

George Rodriguez is president of the South Texas Alliance for Progress and can be followed on Facebook at “El Conservador” or on “WatchdogWire.com”.