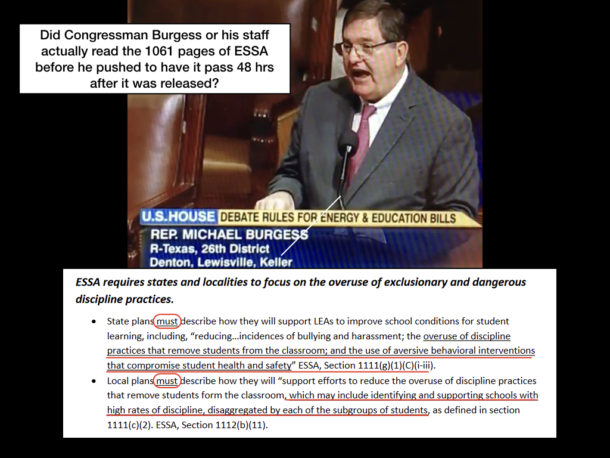 By Alice Linahan March 2018
There is an important point that needs to be made when it comes to the wrongful deaths of 17 students and teachers at Stoneman Douglas High School in Parkland, Florida.
As seen with the Obama Administration’s modus operandi; implement an unconstitutional pilot program and then pass laws to make it legal. I.E. the Promise Program.
It is extremely important to recognize the fact that the Every Student Succeeds Act (ESSA) which was released and then voted on 48 hrs later by Congress in December 2015 is a re-authorization of the 1965 Elementary and Secondary Education Act (ESEA).
Hindsight is 20-20. One of the first unconstitutional carrots of federal control of education was in 1965 when the 35 page  (ESEA) was passed.

* Re-authorized in 2001 and named No Child Left Behind (NCLB) and forced education to integrate with mental ‘health’.
* It was again re-authorized in Dec. 2015. Championed by TN (R) Lamar Alexander, WA (D) Patty Murray and my TX (R) Congressman Michael Burgess. Now, named the Every Student Succeeds Act. ESSA codified into law behavioral modification and psychological profiling and tracking of students from Pre-K through the Workforce.
* When partnered with, yet to pass, “evidence-based” federal legislation that will give the government the legal ability to have a National Student Database.

Giving the state and federal government the authority to decide who gets guns and more importantly who will not. This is a backend tactic for Gun Control and the elimination of the 2nd Amendment.

It is interesting that the solution to “FiX” the issue of mass shootings in schools, being pushed in Washington and in the media is unconstitutional “Gun Control” and Mandated mental health screening of students.

The following abbreviations are the psychological techniques that were codified in (ESSA), These techniques are being performed on children every day in classrooms across America.

What gives teachers the qualifications to perform psychological assessments and interventions on students? Can this psychological data collected on our children impact their ability to own a gun or get a job in the future?

ALL affective domain Social and Emotional Learning (SEL) curriculum, techniques, and teacher training from the classrooms of America now mandated by ESSA.
PBIS– positive behavior Intervention and supports
MTSS– multi-tiered system of supports
RTI– response to intervention
S-WTSS– school-wide tiered system of supports
EIS– early intervening systems
SSIS– specialized system of instructional supports
UDL– universal design for learning
“The real SEL is more about collecting online data on children, a lot of it creepy, and creating a false sense of caring so children will act better in school.”
In order for the Obama Administration to make legal the implementation of their Promise Program, which contributed to the Florida shooting (as cover by Rush Limbaugh and Breitbart); they had to get the Every Student Succeeds Act (ESSA) passed before Trump took office.
Here is Obama’s statement when he signed ESSA.

“This is an early Christmas present. After more than 10 years, members of Congress from both parties have come together to revise our national education law.  A Christmas miracle:  A bipartisan bill signing right here.  (Laughter and applause.)  So I was telling Lamar we should do this more often.  (Laughter.)  I love it when we’re signing bipartisan bills.  Today, I’m proud to sign a law that’s going to make sure that every student is prepared to succeed in the 21st century. “

The motto used by Broward’s exemplary PROMISE Program is?

This is using the theories of “Restorative Justice”

How is the left able to get away with this? The Every Student Succeeds Act which was championed by my Republican Congressman Michael Burgess as reported by Gretchen Logue here.  According to The Southern Poverty Law Center, the adoption of ESSA encouraged school districts to take a look at their disciplinary policies.  According to this democrats-edworkforce/house/gov document, the change in disciplinary policies is not encouraged, it’s required:

“PROMISE is an acronym for Preventing Recidivism through Opportunities, Mentoring, Interventions, Support & Education.”-

The Washington Post reported “Teacher’s say Florida suspect’s problems started in middle school, and the system tried to help him,” Nikolas Cruz “was entrenched in the [PROMISE] process for getting students help rather than referring them to law enforcement.”
The PROMISE Model calls it “more effective coping skills and pro-social behaviors”. The e-book Eliminating the School-to-Prison Pipeline published by Broward County Public Schools can be found here www.browardprevention.org/behavior/promise/
“This approach focuses on the situation being the problem rather than the individual being the problem.”

“Broward County Public Schools is committed to keeping students engaged in school and out of the Juvenile Justice System. We take great responsibility towards achieving our mission – to educating all students to reach their highest potential. We believe the potential of each of our students is worth developing, including our youth who are at risk of engaging in delinquent or criminal behaviors, and those already involved in the juvenile justice system. It is for this reason that we have invested heavily, in partnership with a number of community organizations, to provide prevention and intervention programs and wraparound services for identified youth.”

Below is from Education Reform researcher Dr. Mary Byrne.

The parents of the Broward County students who were killed will never get their “restorative” justice in this lifetime. Superintendent Runice can’t restore those families to wholeness no matter what he does.
If there’s anything we can do to expose the cabal of perpetrators responsible for the wrongful deaths of those children and the other destructive policies of the Obama-Duncan administration, we must do it for those heartbroken and grieving families and what remains of the community still under the leadership of Superintendent Runcie.

Several things I read about the Superintendent Runcie connected for me as I watched the video on the Broward Co Promise website: https://www.browardprevention.org/behavior/promise/

Duncan, Coleman, and Runcie have a lot in common — none of them had classroom experience. Businessman Robert Runcie named Broward County’s new school superintendent
Runcie, 50, a top-ranking Chicago schools administrator who has never been a teacher or a principal, said his first priority would be student achievement. And in order to focus on students, he said the district had to restore public trust and improve its business practices.
So, it’s highly likely Runcie, Duncan, and Coleman are BFF
2. The Duncan-Runcie relationship was the foundation of the PROMISE program in Broward County and why the Sheriff’s Department was soooooo cooperative in not reporting crimes.
Robert Runcie – Education Week Leaders To Learn From
Here’s his bio from the Broward Co School District website: Superintendent’s Bio
Superintendent Runcie knows first-hand how a high-quality education can transform a person’s life. Born in Jamaica, he moved to the United States as a young boy and became the first member of his family to attend college, graduating from Harvard University and earning an MBA from Northwestern University.  He later founded a management and technology consulting company and held several strategic leadership positions with Chicago Public Schools, including serving as its Chief Information Officer, Chief Administrative Officer, Chief Area Instructional Officer and Chief of Staff to the Board of Education.
Superintendent Runcie led BCPS efforts to become a national model for ending zero tolerance policies for non-violent offences in schools. With the support of the School Board and through collaborative community efforts, BCPS has instituted new, effective practices for handling student behavior incidents, without resorting to law enforcement involvement.  Student-related arrests are down by 65% since Runcie’s arrival.
2. Runcie was demoted from his position in Chicago Public Schools before he took the position in Broward County, CPS executive leaves district for a new post in Florida
. . .his name was floated around at one point as a possible choice for interim superintendent and then as a possible schools chief under Mayor Rahm Emanuel.
Former Mayor Richard Daley chose Chicago Community Trust’s Terry Mazany as interim superintendent and Emanuel eventually chose an outsider, Jean-Claude Brizard, as CEO of the district. Most recently Runcie was named chief of staff to the Board of Education.
but that didn’t bother the Broward County School Board. One of the “assets” he brought to Broward County was his strong ties to the Obama administration. See Miami Herald article embedded in this post: Runcie leaving Chicago for Broward – Substance News
Some are hopeful that Runcie’s connection to the Obama administration through Duncan will draw some benefits to the district and raise Broward’s profile in the national discourse on school reform.
Throughout his interviews, Runcie said he wants Broward to serve as a national model for what’s done right. “We all need to do this together,” he said. “There’s not really one Superman in America, but there are super communities.”
Superintendent Runcie and Secretary of Education Arne Duncan worked together to use Broward County Public Schools as a model setting for the new social justice program. A press release from Duncan’s USED. Note the reference to Broward County Schools in Duncan’s press release about reducing statistics of school suspensions. Note that the press release is dated September 30, 2015, just days before his resignation as Secretary of Education, October 2, 2015.
There’s the young boy from Broward County Schools, who racked up almost thirty behavior referrals and received his first battery charge as a seven-year-old, after having an anxiety attack following the death of his grandfather.
3. Superintendent Runcie is a 2009 graduate of the Broad Superintendent’s Academy for the Management of School Systems –– Robert Runcie | The Broad Center
He shares alumni status with Broad Hall of Famers such as Superintendent John Deasey of Los Angelos (remember he threw the technology contract to Pearson) and was passed over for the job of CEO of CPS, which later went to Broad Superintendent Barbara Byrd Bennett of Chicago (remember she went to prison for a bribery scheme).
4. A pattern of Obama-Duncan cronyism operating recklessly and to the detriment of students can be observed in the administration’s appointment and financial support of Robert Runcie’s brother, James Runcie, as CEO of Student Financial Services in the USED. James Runcie also attended Harvard (like Obama, Duncan, and his brother) and was appointed to the Federal Student Aid program in September 2009 and became its CEO in 2011 — the same year Robert became the superintendent at Broward County
Days before leaving his position as Secretary of Education in 2015, Arne Duncan secretly reappointed James Runcie as Federal Student Aid Boss despite credible citations of harming students.
Education Department Secretly Reappoints Top Official Accused Of Harming Students
James Runcie abruptly resigned from that position in May of 2017 (months after Obama administration ended) when Secretary of Education DeVos asked him to testify to Congress about improper student aid payments made from his office.
Federal Student Aid Boss Runcie Resigns
His secret bonuses couldn’t have helped the budget for his office, either.
Report: Education Dept. Official Received Secret Bonuses Despite Losing Billions to Fraud, Corruption
In general, it seems the Runcies were acting as agents of Arne Duncan to support the Obama administration’s agenda for selective social justice.
In my opinion, Robert should stop deceiving himself into believing he can remain as Broward County superintendent. People are already connecting the dots back to his Chicago connections and corrupt company of Broad Academy alumni. How can Runcie pretend that grieving parents will ignore his central role in developing the PROMISE program that was obviously inadequate for managing students with behavior disorders who are emancipated?

Perhaps Robert and his brother should ask Arne for advice on what to do now, since they’re all responsible for mass destruction of American lives orchestrated from the USED.