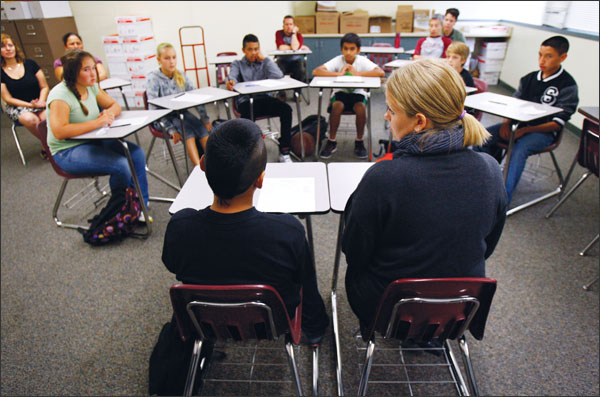 Building Character or Behavioral Programming – What is Restorative Discipline?

Remember, what looks good, sounds good, and feels good, may be very dangerous for our children and their future.
Building Character- sounds nice, right? That is until you look behind the curtain and whose actually pulling the puppet’s strings.

The new aim of the curriculum today is a shift away from knowledge-based academics to attitudes, values, beliefs, and behaviors. We know that to understand the big picture of what is happening in education, you have to look at the strategies and tactics of those pulling the strings.  What they are doing is designing programs and curriculums that are no longer academic and knowledge-based. It is all about programming the behavior of the next generation of Americans.

The dots are clearly beginning to be connected for me. Schools in San Antonio, Texas are now implementing new discipline strategies called “Restorative Discipline.”

“Kitty Hawk Middle School teacher Frederick Ward works with students during a circle session on Tuesday, Dec. 16, 2014. The school will be using restorative discipline starting next year as an attempt to bridge relationships between students and educators to foster a more positive and productive learning environment.”

“The Department of Justice’s National Institute of Justice recently promised a whopping $63 million to investigate school safety programs and to reward districts for implementing “restorative justice” and other related school discipline programs.

According to an October 1st statement from Attorney General Eric Holder, “This funding is being awarded as part of the Comprehensive School Safety Initiative – a large-scale, multi-agency research effort to build practical, and scientifically-sound, knowledge about effective ways to increase school safety nationwide.”

So, what is the purpose of the Common Core/21st Century/Workforce Development education of today, and how are they achieving their goal? Robin Eubanks gives us the answer – by “gutting academics, which foster that individual ability in some people to reason abstractly at high levels, is a necessary first step to shifting stealthily towards more of a state-managed society and economy than we Americans have ever been willing to accept. So a large number of Educrats( the term I will use for all those education bureaucrats and professors pushing these ideas at our expense) implement policies and practices and curricula based on this belief that our schools and colleges and universities need to change the values, attitudes, and beliefs of students,” instead of giving them an “education of opportunity” of reading, writing, and math.

I find it interesting that in Dannette Clark’s article, the $63 million is being used for a multi-agency research effort. Excuse me, our children are NOT Guinea pigs for the federal government and their public/private partnerships, using our tax dollars for research purposes.

From Chapter 2 (The Danger of the Fluent Reader: 100 years of Deliberately Restricting Literacy) of Robin Eubank’s book, Credentialed to Destroy: How and Why Education became a Weapon…..

“No longer teaching decoding properly means that the historic purpose of print-to allow an accurate internal dialogue with a long deceased or far away human being- becomes a much rarer skill. It means that fewer of today’s minds can access the thoughts of the still acutely brilliant and relevant minds from the past. What the printing press and newspapers and Bibles in English instead of Latin gave the masses is now essentially being taken deliberately away. Think of it as the ultimate behavioral psychology experiment. What is man without print fluency may prove to be as dangerous as trying to now remove agriculture with a population that relies unknowingly on its magic.

The chief proponent of the ‘scientific’ child study movement was Edward L. Thorndike who taught at the Teachers College at Columbia University from 1899 to 1940. He was responsible for educating a huge percentage of the future professors and deans of colleges of education throughout the country. He literally trained the trainers. He is credited with basically inventing the field of educational psychology and education research. Perhaps, like me, you assumed that educational psychology was about how to best transmit desired knowledge? No. Thorndike viewed the mind as a mixture of ‘unlearned reaction’ or instincts. Educational psychology examined how these human instincts are developed and how they can be strengthened, directed, or inhibited.

What Thorndike sought was to create a ‘physics of psychology’ that would allow humans to be examined and directed just like physical objects in the hard sciences.

As you can imagine free will and conscious intention and direction would get in the way of this Thorndike scheme described in a 1910 lead article in the journal of Educational Psychology that was disturbingly still being quoted as an aspiration in a 2002 lecture:

“A complete science of psychology would tell every fact about everyone’s intellect and character and behavior, would tell the cause of every change in human nature, would tell the result of every educational force–every act of every person that changed any other or the person himself– would have. It would aid us to use human beings for the world’s welfare with the same surety of the result that we now have when we use falling bodies or chemical elements. In proportion as we get such a science we shall become the masters of our own souls as we are now the masters of heat and light. Progress toward such a science is being make.”

Yikes! Social Control indeed~ Now I want every parent and school board member and politician to keep that passage in mind every time they hear the word ‘Data’. Or Personalized Learning. Or Student-Centered Learning. We gather data on each student. We monitor the learning of each student. We change instruction based on the data. As you will see all the date is being gathered to mold individual minds away from the conceptual and cognitive. Computers and Digital Learning, especially adaptive software and Gaming as a classroom focus, are all Godsends for schemers seeking to fulfill Thorndike’s dream. Educational psychology for social control (in their very own words) gets to masquerade as a learning sciences theory or pedagogical method or ‘best practices’ technique.”

According to David Yusem, the Restorative Justice Program Coordinator for the Oakland Unified School District (OUSD), “restorative justice is really part of a larger strategic vision of serving the whole child, and creating what we call “full-service community schools” that even include “medical and dental facilities… so kids can get that for free.”

Yusem continues, “We have to understand that education has to be more than just 3 + 3, right? Kids can’t learn well if they’re hungry. They can’t learn if their tooth hurts. So restorative justice is part of that strategy, and it really works here to empower youth.”

In other words, instead of accountability and consequences for bad behavior, troublesome students – who, through the lens of ‘cultural competence’ and ‘justice’, are viewed as victims of a racist system – are given more free stuff.

Despite using restorative justice to some degree in the district for several years, OUSD also faced a 2012 Department of Education civil rights investigation into high suspension and expulsion rates among African-American boys.

DOJ’s National Institute of Justice says that of the $63 million allotted, $3.5 million is being spent to enhance school safety data collection. Specifically, NIJ says it is partnering with the Department of Justice, Department of Education, Homeland Security, Health and Human Services, and the Secret Service Division of the Treasury Department to share “knowledge, research efforts, data collection activities and strategies, and programs supported by each agency.”

At the local level, districts receiving restorative justice grants, like Rhode Island’s Central Falls School District, for example, are working with their state departments of children and youth services to integrate all family court juvenile justice data with education, health, and other relevant data on students.

It stands to reason that the federal government will then have access to that data as well – for safety reasons, of course.

Time to wake up parents, and go take back our children and their local schools. As Bill Ayers says in this video…