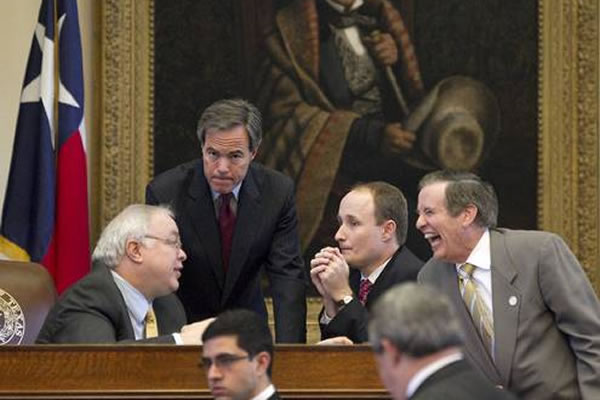 Maneuvering in the TX Legislature over CSCOPE?

Remember last week the big announcement on the Glen Beck show by Senator Dan Patrick that CSCOPE was gone?

Well not so fast Sen. Patrick. It looks like the political maneuvering to help protect the ESC’s (Education Service Centers) may not have worked out for you.

Word from the capitol is that once this deal was made with the TESCCC directors- (those who own the CSCOPE curriculum) illegally because they are actually the 20 ESC directors- Senator Patrick expected that Freshman legislative hero Rep. Steve Toth would pull his HB 760 because there was no need for oversight by the SBOE if CSCOPE no longer was in the business of selling curriculum to Texas school districts.  Well it seems Rep. Steve Toth wisely saw this as political back door deal and choose not to take the advise of Sen. Patrick- he did not pull HB 760.

“We owe a large thank you to the moms and dads who have brought the issues with CSCOPE to light. I believe that this is a great step forward and a great example of how this legislative process works. In the press conference, I mentioned the intention to pull down SB1406 / HB760 from the House Calendar vote given the agreement contracted between the CSCOPE and State Officials. When this was stated, I was under the impression CSCOPE would be fully withdrawn from the local ISDs.”

Representative Toth continued, “Under further review, I have found the Education Service Centers do not intend to pull CSCOPE fully out of the school districts. Seems that the CSCOPE lessons may be withdrawn but CSCOPE will still be alive and well within the districts. According to local teachers, they are now being encouraged to download or print the curriculum and content prior to the removal so that it can be used in the future. This is not what I agreed to when I stated I would pull down the bill for a vote. After speaking to the Chair of the State Board of Education and other legislators who have worked tirelessly to see this through the legislative process and support the oversight of CSCOPE, I decided to leave SB1406 / HB760 to the will of the Texas House.

You see there are back room deals being done daily that control our children’s future. From what Texas Tea Party Leader Ray Myers learned at the Canton Education Forum this past Saturday he clearly understands what is happening behind the scenes and is asking the right questions. Below is an e-mail I received from him titled….

The Masquerade in our Schools!

Our Children and Grandchildren are the victims~

Senator Dan Patrick and other “So-Called– Respected” education proponents are playing a shell game with our Kids–AND I BELIEVE HE AND OTHERS KNOW WHAT IS GOING ON!

CSCOPE IS NOT DEAD– ICLOUD IS COMING FAST AND OUR PROGRESSIVE EDUCATION POLITICIANS AND PUBLIC SCHOOL GURU’S WILL CONTINUE TO GET RICH ON “LOW PERFORMING SCHOOLS!”–
LET THIS SINK IN……” THERE IS NO MONEY IN SUCCESSFUL SCHOOLS!”
If you want to get into the meat of the problem in our public schools– check this out:
“There is “NO Money” in successful schools.”
Wonder why all of the money goes to low performing schools—duh– that is the lefts target!

We need to check out who is making millions on low performing schools.
Why is CSCOPE and ICLOUD designed to NOT raise test scores– Guess What!
Money is tied to the Dumbing Down of America!
EDUCATION CONSULTANTS, POLITICIANS, SCHOOL CONSTRUCTION CONTRACTORS, TECHNOLOGY VENDER’S AND TOP END SUPERINTENDENTS–AND OTHERS TO BE UNCOVERED.  We are digging NOW!
Successful students is not the goal of the CSCOPE & ICLOUD proponents.
ARE WE ON TO SOMETHING?

To understand who the Green, Yellow and Red folks are read…  Education is a Serious Business.
Two Points:

So let that sink in and prepare to build the ground troops across this state to Seek the Truth, Share the truth, and STAND FOR THE TRUTH!

The graphic below can be used for Yard signs in your local area!