Margaret Spellings is now part of something called Texas 2036 with Tom Luce.
Who is Margaret Spelling you may be asking?
As reported here back in January 2013:
Excerpts:

“The principal architect of Texas’s accountability system was a lawyer from Dallas named Sandy Kress. The most thorough analysis of Kress’s role in pushing Texas’s education policy in the direction of a high-stakes testing system was one written by Mark Donald for the October 19, 2000 issue in the Dallas Observer right before George W. Bush’s election to the presidency. Entitled “The Resurrection of Sandy Kress,” Donald’sarticle described how Democrat Kress and Republican Bush came to be close allies in pushing Kress’s vision of “educational accountability.”

“Sandy Kress remained a key strategic advisor to the governor. He worked closely with Margaret LaMontagne (later Margaret Spellings), who was Gov. Bush’s education advisor, in expanding the statewide accountability system. During Bush’s tenure as Governor, the state consolidated power over education in the office of the Texas Education Agency and the Education Commissioner who was appointed by the Governor. Meaningful local control over education in Texas continued to erode as the accountability ratings system caused local school districts to focus more attention on the performance measurements put in place by the state particularly the testing system.”

The information above makes what has been revealed in the exchange heard in the video below with Tom Luce, founder of Texas 2036 even more interesting. You see, Luce has been involved all along with the Bushes and the ed reformers:

Tom Luce: Luce was a key advisor to George W. Bush. “He served as U.S. Assistant Secretary of Education for Planning, Evaluation and Policy Development during the George W. Bush administration.”  Currently, Tom Luce is a Consultant and Founding President at Meadows Mental Health Policy Institute.   The foundation that was cited by Sen. Jane Nelson as who helped write Texas Mental Health (School Safety) legislation, SB 10 (now incorperated into SB 11 and passed in the 86th Session), as heard here at Timestamp: 11:40.

Dallas Morning News has been a mouthpiece for the reform agenda and the data collection from the cradle to career:
Can’t we all just agree on the data? Tom Luce offers a fresh debate to lift Texas

He’s formed a public policy group, Texas 2036, to push lawmakers and the public to confront some of the state’s most vexing issues: education, health care, infrastructure, the environment, public safety and government performance.

Todd Williams is Texas’ local cradle to career data guru with a nonprofit Commit (under StriveTogether) that has access to 16 million student-level records at the Texas Education Agency:

“Commit recently received access to sixteen million Texas Educational Agency deidentified, academic assessment records, matched longitudinally, for students who were in grades three to eight between 2012 and 2016. While the team had previously performed analyses on aggregate school and district level data, it had never before had access, or the analytical capacity needed, to work with deidentified student-level records at this scale.

With the support of the Microsoft Cities Team and StriveTogether, DataKind collaborated with Commit’s Analytics team to leverage these individual records to understand predictors of academic assessment performance and student success over time.”

It is important to note: Todd Williams was current Texas Commissioner of Education, Mike Morath’s reference for the Next Generation of Assessments and Accountability Commission member. Morath ended up being moved to the Commissioner of Texas Education Agency (TEA) and his spot on Next Gen was filled by Texas Public Policy Foundation fellow Stacy Hock.

Back to Margaret Spellings, she just loves DATA as well, and the “A-word”. The whole NCLB accountability system was designed to set up schools for failure. They had to have the data in order to shutter campuses. Adequate Yearly Progress (AYP) created a new crop of losers each year. The ‘A’ Word: Accountability — The Dirty Word of Today’s Education Reform 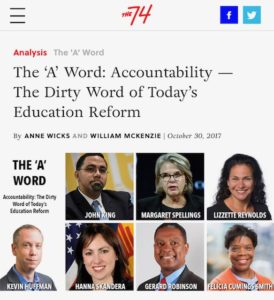 The ‘A’ Word: Margaret Spellings — ‘You Can’t Solve a Problem That You Don’t Diagnose Correctly, Fairly, Accurately, and Comparably’

“This interview is part of The ‘A’ Word series, produced in partnership with the Bush Institute to examine how “accountability” became a “dirty word,” and what can and should be done going forward to ensure accountability withstands the test of a bad reputation.”

The man who now holds Sandy Kress’ old Dallas ISD board seat raised $500k to win and was also featured on ‘The 74’ rag: 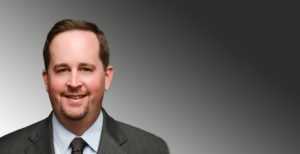 The ‘A’ Word: Dustin Marshall — ‘It’s Shocking, Appalling, That There Are Arguments Made in Education That Data Is Bad’

Gates is deeply entrenched in their scheme, including Steve Ballmer, former CEO of Microsoft. Ballmer met with Commit/Todd Williams and the Dallas business elite in 2017: 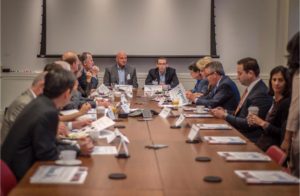 Two articles on a new Commission started by Bill Gates to reform higher ed & focus on the economic value of college degree by collecting more data. And wouldn’t you know the Commission is filled with former or current Gates grantees?

Nick Tampio critique here:  The Gates Foundation has launched a commission to determine the value of a college degree.

“So how can this commission transform American higher education where earlier reforms have not worked? By encouraging Congress to make federal loans and grants available to students in some majors, such as engineering or business, where graduates tend to earn a high salary upon graduation. Conversely, Congress might be moved to make loans and grants unavailable for students in other majors, such as theology or humanities, where graduates do not earn as much.”

As Commission member Margaret Spellings says, “the data is coming”