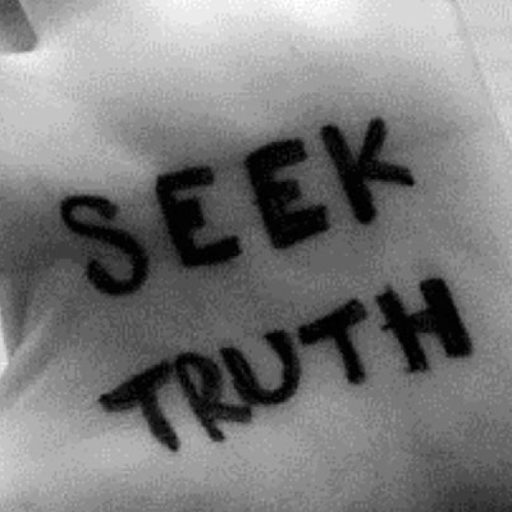 Millie the Cow and Education Politics in Texas

This week, on Facebook I posted an article featuring the Editor-in-Chief of Breitbart-Texas, Brandon Darby, along with the comment, “Brandon Darby gets it!! This article made my day!” 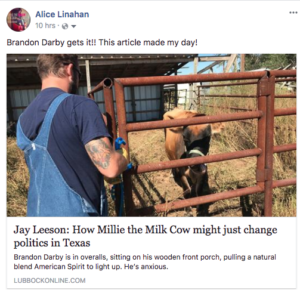 Let me give you an excerpt from the article, then I will explain. I encourage you to click the photo above and read the entire article.

He brings up a recent conversation wherein a prominent political consultant pleaded with him to ease up on a stray West Texas lawmaker. “He told me, ‘People need to have the courage to vote for what’s not in their own people’s interest, but for the state’s greater good.’ Well, whose interest is that, who defines ‘greater good’? Should it be a billionaire in Midland-Odessa and couple of people who run his organization?” he asks, with an intentionally unsubtle reference to Tim Dunn, Michael Quinn Sullivan and Empower Texans.

“They define greater good, and everyone else can go to hell? I don’t think so.”

There’s no slack in his rope now. He analogizes his antipathy for how Texas Republican primaries have recently played in rural regions.

“It’s like the money gospel preachers who convince an elderly populace that in order to get saved and get blessings, they need to dip into their savings and give it to them, while these preachers live lavish lifestyles,” he says.

“Elderly people and those less savvy get these dishonest mailers, and it’s an attempt to make them believe that if they don’t vote for the group’s candidate, they’re responsible for deaths of babies, communist takeovers and open borders.”

Now, let me explain. In the last few years, I have become the black sheep in the Texas Conservative Grassroots/Tea Party movement. A movement I was very much a part of, as I described myself back then; I was a Conservative Republican Mom and proud of it. I helped to raise funding and produce videos for the Speaker Showdown in 2010 and again in 2012 and for the  Oust Strust Pledge Card. Along with founder of Women On the Wall, Rebecca Forest, we hosted the Speaker Showdown to “Oust Straus”.  I was a staunch Conservative fighting against the evils of Speaker of the House Joe Straus. Our goal was to get “Conservative Republicans” elected. AND THEN…

I started to ask questions about what I saw happening in our public schools. I had kids in those schools. CSCOPE came into my own children’s small school district and I knew the truth. Lt. Gov. Dan Patrick, then a Senator and Chairman of the Education Committee was lying to the public. He never got rid of CSCOPE like he claimed. He actually allowed it to be rebranded into TEKS Resource Services. He cut a deal.

Just like the fact that Common Core is in Texas, they just call it College and Career Ready Standards.

In fact, when it comes to math, the Texas standards are worse than Common Core. They have been lying, and they know it.  I wasn’t falling in line with the whole Public schools are evil and must be dismantled narrative because I knew the legislation that was being put in place to destroy it.

Reality started to hit me square in the face. All these organizations and non-profits I thought were so “conservative”, whatever the heck that means nowadays, were in fact, a big part of the problem. They say Joe Straus has blood on his hands for the unborn children murdered in the womb. Okay, but, what about the children in the classroom whose lives are being destroyed daily, as  Outcome-based Education Reform legislation is being passed by conservatives and liberals unanimously.

I wrote about it here… Why are Texas Schools failing?

Here is the reality on the ground… After reading the article featuring Brandon Darby it truly made my day because I now know Brandon Darby get’s what I get. What will actually “Make America Great Again”. 1. Truth and facts matter and the truth must be exposed. 2. It is about us, the everyday folks. The ones who still believe in a constitutional republic, where we elect people to vote for our community’s best interest. Not the interest of those funding the non-profit think tanks on either side of the political aisle. The people Brandon described in this article…

“I live amongst the most conservative people in the world,” he says, deploying the vigorous intellectual populism Andrew Breitbart found and Steve Bannon fosters. “They are committed to their marriages, raise their kids to be self-sufficient and fear God. They take care of their land and their neighbors. But because they vote for the power of government in ag policies and public schools, groups in this state call them liberals.”

I wrote the comment to my 3 children linked below back in 2015. I believe I understood back then what I have come to clearly understand today because of the blessing of my Uncle JM 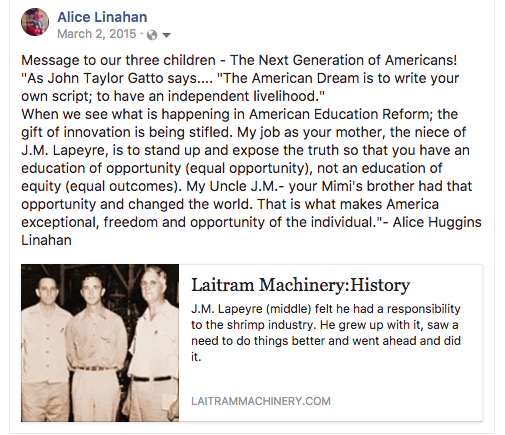 There is a fundamental “SHIFT” occurring in education today.
The fundamental shift in education we are talking about is changing from a transmission of knowledge, that parents still expect from our schools to an emphasis on altering the students world-views, their attitudes, values, behaviors.

When you understand the template and the goal is to change the disposition of students, you begin to clearly see the danger to our children and our nation.

Education is no longer about providing an equal opportunity at success in life because a kid graduates and can read well, write well, can do the math and knows history.

This is about power and control over the next generation of Texans. This was in large part locked into place (like a set of gears) by the federal government’s reauthorization of the 1965 Elementary and Secondary Education Act (ESEA), now known as the Every Student Succeeds Act (ESSA) via state-mandated assessments and accountability.

And what does ESSA do…? For starters, it:

But, as the infamous David Coleman stated in the video below… 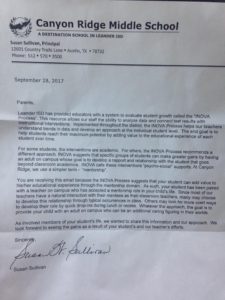 Think I am CRAZY? It is TIME TO WAKE UP PARENTS and TEACHERS!!

This is what we’ve been warning was coming!!  It is HERE, in TEXAS!!

Felt the need to alert parents to the INOVA process (a 3rd party company) that has been implemented in many districts without parent notification.

I received this letter from Canyon Ridge MS letting me know my 7th grader was diagnosed as needing PYSCHO-SOCIAL intervention according to her STAAR scores.

This child has all A’s, never failed a STAAR test, never in trouble, in athletics, and tons of friends.
She was assigned an adult mentor, met with her mentor, and all of her teachers informed of her psycho-social status prior to this letter which was the first time we heard about it.

I then contacted my other children’s schools and my child at LWBE was also labeled as needing psycho-social intervention. He has never failed a STAAR test either but some how the STAAR results determined his psychological needs. Unlike CRMS, Laura Bush Elementary would have never contacted us about his labeling. We only knew to ask since we received the letter from the middle school. I also contacted the high school and after initially stating they were unsure if they could share my students’ data, I received their INOVA analysis.

I’m sharing this as a concerned parent. I do not have the answers. But I believe parents should be informed at the very least.

Governor Greg Abbott’s appointed and Texas Senate unanimously confirmed, Commissioner of Education, Mike Morath, is advocating the state have formalized standards and assessments evaluating and collecting data on the social and emotional state of Texas students? Basically psychologically profiling students for the workforce.

What’s interesting is that what Mike Morath is advocating, is exactly the same thing pushed as part of the “New Common Core” as stated by Rep. Tim Ryan – Ohio while debating the Every Student Succeed Act (ESSA). Now, why was Commissioner Mike Morath suggesting the “Next Generation of Assessments and Accountability in TEXAS fall in line with the federal mandates of ESSA?

NOW- Why are Conservative Republican think tanks like Empower Texans (ET) writing about and promoting the appointment of Commissioner of Education Mike Morath? There were clearly questions raised by many of us who exposed the complete lack of experience of Mike Morath.  As heard in this playlist of testimony against his confirmation here.

In addition, ET has written positively about Airick West, also known as AJ Crabill, Deputy Commissioner of Governance in this article: Reform may be on the horizon for Midland ISD.

These so-called Conservative non-profit think tanks, who are strong supporters of Public/Private Partnerships, seem to really have some strange bedfellows. One of the most controversial hires of Commissioner Morath being AJ Crabill, Deputy of Governance of the TEA making $180k a year and whose highest attainment of education is a high school diploma, was a major Democrat community organizer. It looks like he had to change his name due to ethics violations in Kansas City. Now, isn’t that interesting.

Lastly, below are a couple of excerpts from articles written by one of my favorite child advocates, Denis Ian …

A Grave New World:
“At the moment, the rarest word in all of education is “kids”. And the most ignored phrase in this giant jungle of jargon is “common sense”.

Long-revered pedagogical precepts have been blue-penciled by classroom-allergic theorists now leveraged by profiteers who see public schools as the next sustainable profit-producing mother lode.
And the political class … put into office by all of us … has mocked our vote and deserted our children in a flash of cash.”

It may be time to take up your shields again … and to bang them more loudly than ever.

The mother who set this morning on fire … she deserves the last word.

“I don’t know who you think you are … but the parents are awake. We are on to you and the behavior of your administrators. We will hold you publicly accountable until you decide to do the right thing for our children. And we will make you famous until that day. You should be ashamed of yourselves.”

I know of 3 suicides of students in the North Texas area just in the last month. A high-performance consortium school district in central Texas last year had 5 in their district alone.

It is time to protect our children in the womb, and in the classroom!