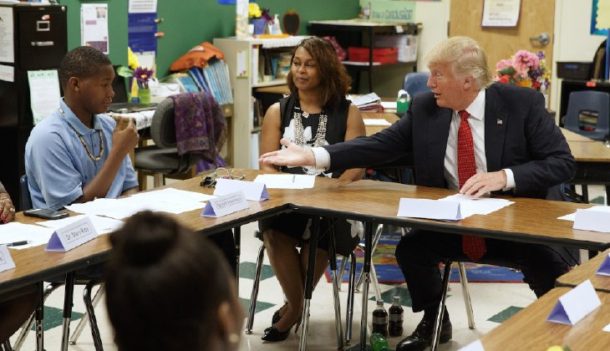 Below is a letter that I sent today to a top Trump advisor. I hope you will read it and pass it on. Our children and their future is at stake.

I am reaching out to you once again because I have great concern with the talking points given to Mr. Trump on Education.

School Choice is NO CHOICE and parents across America know it. After hearing the truly flawed education policy spoken today by Mr. Trump, it is clear he is being advised by the same “School Choice” big money folks who are connected to Sen. Ted Cruz. As I stated in my previous email, it is actually minority and economically disadvantaged children who are being harmed the most by the “Schools of Choice” “Global Transformation in Education”. Specifically by the passage of the Workforce Innovation and Opportunity Act (WIOA) and the Every Student Succeed Act (ESSA).

A FEDERAL UNCONSTITUTIONAL SYSTEM has been locked in place through the passage of federal and state legislation, like a set of gears, “rigged,” if you will, to sort our children into positions within the workforce, based on the soviet model. The majority of American parents do not have the funds for tutors or an opportunity outside of the system, because of “School Choice”, resulting in the next generation of American children being destine to work in a planned economy by the federal government. I DID NOT HAVE MY CHILDREN TO BE “HUMAN CAPITAL” FOR THE STATE.
A PLANNED ECONOMY WILL NOT MAKE AMERICA GREAT AGAIN.  Our children do NOT have an equal opportunity at success in life in this system because it is based on “equal outcomes,” not “equal opportunity”.
Parents have no choice and can not escape the Common Core National Standards rebranded in ESSA “College and Career Ready”, in any state in America because of the passage of ESSA and parents from all political backgrounds know it. Why? Because we are living it.

In addition, American children’s private data is being collected, without parental consent and used as a commodity for the technology companies who are profiting from this $600 Billion Pre-School through the Workforce “rigged” system that is destroying the fabric of America, and doing serious harm to children.

Please watch this short video to understand how they are using to OUR children and their private data. https://www.facebook.com/AliceL.Linahan/videos/257301464619953/?pnref=story
If that was not bad enough, what the “School Choice” movement has allowed to come in, is unquestionably a NATIONAL SECURITY THREAT.
Just last night I hosted the Women On the Wall Communication Team Conference Call, here is the archive: https://www.facebook.com/WomenOnTheWall.org/videos/1293715200652305/
My special guest was the director of the “Killing Ed” Documentary, Mark Hall.
KILLING ED is a new documentary feature film that exposes a shocking truth: that one of the largest networks of taxpayer-funded charter schools in the U.S. are a worst-case-scenario—operated with questionable academic, labor, and H1-B visa standards by members of the “Gülen Movement” – a rapidly expanding, global Islamic group whose leader, Fethullah Gülen, lives in seclusion in the Pocono Mountains of Pennsylvania.
KILLING ED enlightens its audiences everywhere with a shocking, first-hand look inside the schools while revealing the corruption of those attempting to privatize our public schools through education ‘reform’ in America.

Trailer for KILLING ED from Visual Truth Projects on Vimeo.

I know that Mr. Trump must get elected. There is no other option. I want to help make that happen, yet, I fear with the talking points he is being given on Education, Hillary Clinton may actually win. It is clear the talking points did not help Ted Cruz and they will not help Mr. Trump.
Please contact me and let me help you help Mr. Trump win on Education. My cell is ________
Sincerely,
Alice Linahan
Voices Empower
Women on the Wall – Vice President
Join me on Facebook  and Twitter