Parents, Are You Ready for the Well Funded Battle Against YOUR RIGHTS As Parents?

Did you know, the Texas Education Code clearly states Parents have rights when it comes to what your children are being exposed too in their classroom. The challenge is, as parents, we are not going in and saying… #CANiSEE what you are teaching my child?

And, when we do… Oh man, there is a very well funded strategy to silence those parents who question.

Case in point, Highland Park ISD has a controversy brewing. There is required reading of sexually explicit, anti-capitalism books in (ELA) English and Language Arts.  Interestingly, as reported in the Dallas Morning News, Carol Wickstrom, a former English teacher and an education professor at the University of North Texas stated…

“In high school especially, she said, the English class curriculum goes beyond teaching literary elements.
Everything that happens in the classroom should be directed to students learning how to live an effective life, a life that has meaning, a life that gives back to the country or community,” she said. “It’s about developing citizens for our world. You have to be able to think on many levels.”

Read that quote one more time…… “The English class curriculum goes beyond teaching literary elements.
Everything that happens in the classroom should be directed to students learning how to live an effective life, a life that has meaning, a life that gives back to the country or community,” she said. “It’s about developing citizens for our world. You have to be able to think on many levels.”

PARENTS ~ They are NOT just teaching Literature in the high school classroom, they are teaching our kids to be global citizens of the world.

Did you know that in Highland Park ISD the Superintendent suspended the books in question because of the outcry of local parents who did not want THEIR children exposed to what was in these books in the classroom, taught by teachers who may not have the same values as those of their family?  Their taxes are paying teachers to teach literary elements, not about values and globalization.

Did you know that the National Sex Education Standards (Advised by board members of Planned Parenthood) are being implemented through ELA and Math?

So, who are these people who think they know what information is appropriate and at what age “OUR” children should learn this “appropriate” information. Let’s look at who is on the Advisory Committee.

Nora Gelperin was the recipient of the national 2010 Mary Lee Tatum Award from the Association of Planned Parenthood Leaders in Education!
http://answer.rutgers.edu/page/nora_award

Deb Hauser has been with Advocates for Youth for almost 20 years, first as Director of the Support Center for School-based Health Care, then as Executive Vice President. In January 2012, Deb became the organization’s fourth President and Executive Director, representing Advocates with the media, funders and colleagues organizations and speaking nationally and internationally about young people’s rights to honest sexual health information, confidential sexual health services, and equitable social and economic opportunities.
http://www.advocatesforyouth.org/about-us/advocates-staff

So what sex ed information do these people think is age-appropriate.

On page 12 it says
“By the end of 2nd grade, students should be able to: Use proper names for body parts, including male and female anatomy.”

On page 14 it says:
“By the end of 5th grade, students should be able to: Describe male and female reproductive systems including body parts and their functions. Identify medically-accurate information about female and male reproductive anatomy.  Define sexual orientation as the romantic attraction of an individual to someone of the same gender or different gender.”

On page 9 under “Guiding Values and Principles”

“Instruction by qualified sexuality education teachers is essential for student achievement.”
Wouldn’t that be the parents? Who decides who is “qualified”?

“Students need opportunities to engage in cooperative and active learning strategies, and sufficient time must be allocated for students to practice  skills relating to sexuality education.”
What does that mean? Something like this?

Here is another interesting fact.

Much like we’ve seen in Colorado, where the teachers union was organizing the students as citizen activists against parents and school board members trying to protect their children. It appears as if a well-organized effort to force the explicit books back into the schools using students and people from outside of the district has achieved their goal for now. As reported on the Women On The Wall Conference Call many of the signatures on the petition were actually from students and people outside of the state of Texas.

It is also interesting to note that during the Highland Park ISD controversy one of the people mocking the parents who were not happy with the content of the books in their children’s classroom was none other than Dinah Miller. 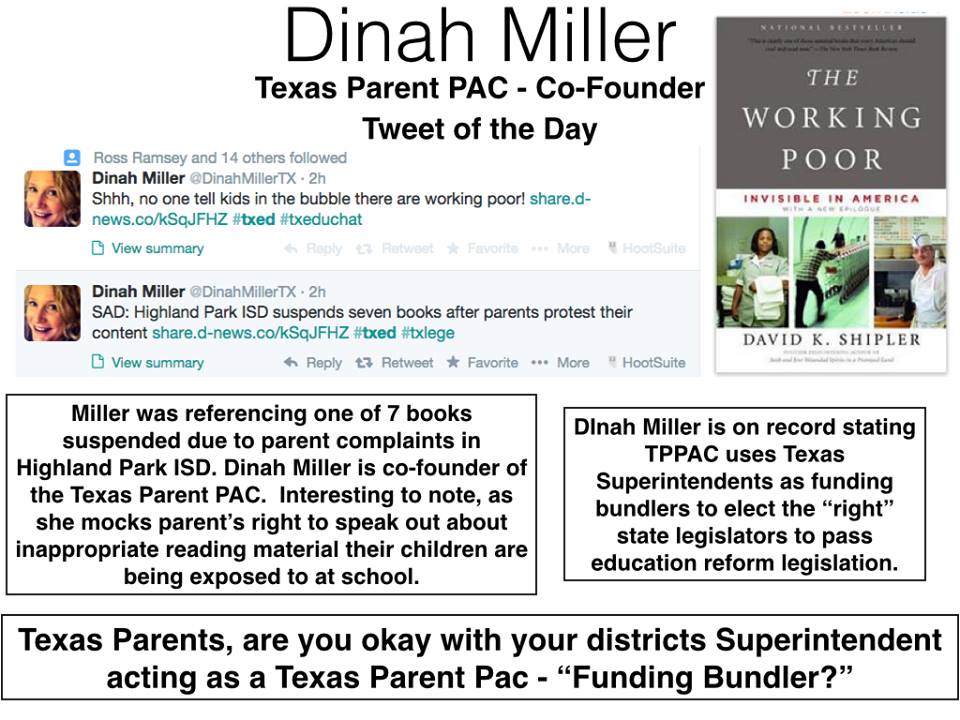 Texas Parents, are you okay with your districts Superintendent acting as a Texas Parent Pac – “Funding Bundler?”

What I do know for sure; in Texas, there are 100’s of millions of dollars that are in the “Education  Bubble” that non-profit organizations who sell curriculum products to our schools have access to instead of going pay great teachers to teach reading, writing, math, and history.   Our children deserve to graduate with an education of opportunity so they have the freedom to be whatever they want to be, instead of being educated in how to be activists for a political agenda.