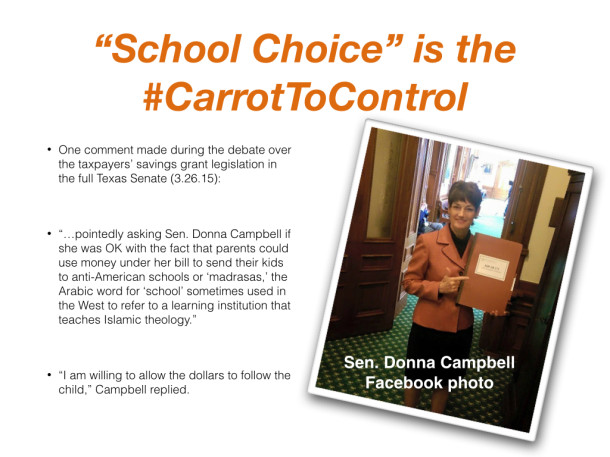 School Choice is the #CarrotToControl the Next Generation – Updated

What looks good, sounds good and makes us feel like we are making a difference by supporting “School Choice” is an illusion that can be clearly documented and proven dangerous for our children and grandchildren.

While I applaud Senator Donna Campbell for legislation such as SB 1819  that determines  resident status of students by public institutions of higher education. SB 276 in affect, is much like the carrot that in-state tuition is for illegals. Sure makes us feel good we are helping these students. The reality is we are setting them up to be harmed on the journey crossing the US border illegally.

The “political purpose” of  Common Core and School Choice is not public and can be defined as revolution through education. Revolution; defined as “a fundamental change in power or organizational structures.” This is, in fact, a centrally coordinated, reorganization of American education that has global tentacles that are indeed a threat to American’s national security.

The vision to Nationalize education has clearly laid out a pathway through “School Choice.” Be sure and take note of the fact that the same type of legislation is going through the legislative process in other states as well. The language  and strategies for control, closely align. WHY is that? It is interesting to me that the proponents of Donna Campbell’s bill in Texas are posting PR and talking points from the Friedman Foundation. 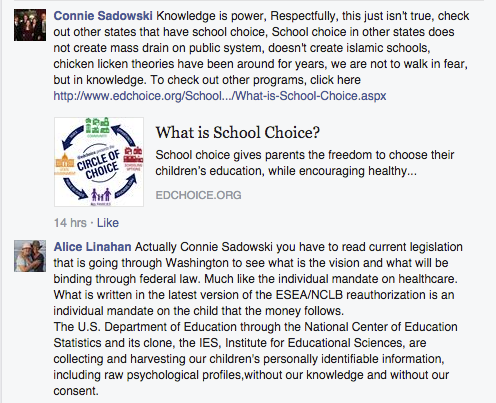 “Participating private schools shall administer annually a nationally recognized norm-referenced test as established by the state board of education. In the event a student with an IEP is exempted from testing, the private school shall prepare annually for the student’s parents a portfolio providing evidence of the student’s progress.” 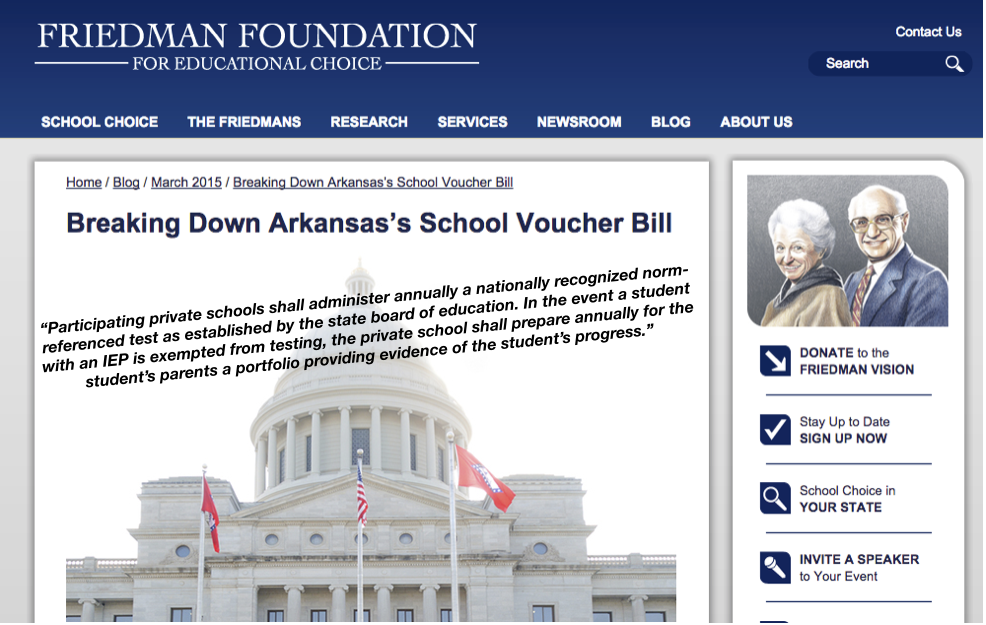 It is much like Dr. Peg Luksik, in this short video, describes battling Out-come based education back in the 90’s. To watch Dr. Luksik’s full talk click this link –  https://www.youtube.com/watch?v=IDLPRlRoeuc

The books are quite explicit. Ted Sizer wrote a book in 2004, The New American High School, which laid out the vision with cites to books going back to the 70′s laying out the vision for Nationalizing Education was through “School Choice”

Anita B Hoge and Gen Yvette Sutton released a Press Release on November 21, 2014, that explained to the country that the U.S. Department of Education through the National Center of Education Statistics and its clone, the IES, Institute for Educational Sciences, are collecting and harvesting our children’s personally identifiable information, including raw psychological profiles, without our knowledge and without our consent.

Recent coverage of Pearson testing contractor monitoring individual students taking the PARCC test has heightened this realization that our children’s personally identifiable information is not only being shared and monitored, but this data is used to make millions of dollars for corporate America. They get the data for free. Our children and their teachers are basically Guinea pigs for educational research.

In Texas our legislators, Republicans and Democrats, passed HB2103 overwhelmingly. This legislation set up 3  P-20W (Preschool through the Workforce)  research centers that now have access to our children and their teacher’s personal data without parental consent.

According to the Financial Times, the Libyan Investment Authority was founded by Muammer Gaddafi’s son Seif al-Islam; more than five Gaddifi family members own shares. The Council on Islamic Relations (CAIR, a recently designated terrorist organization by the United Arab Emirates), Turkey, Saudi Arabia, and the Muslim Brotherhood all heavily invested in Pearson Education through the Libyan Investment Authority. Despite this connection, according to the Guardian, Pearson Education claims as a public company operating in a free market it has no control over its shareholders’ terrorist related activities. 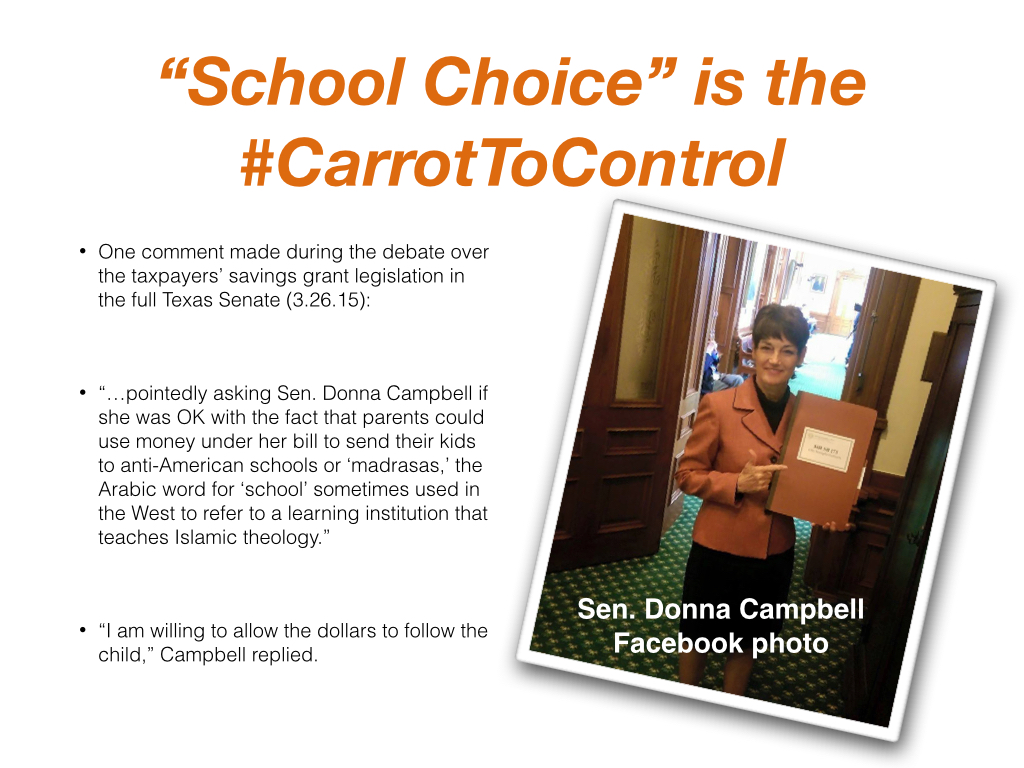 In Texas the STAAR State EOC’s Exams are also produced and administered by Pearson.

The most unconscionable action taken against our children was the Obama Executive Order, 12866, that gutted FERPA, Family Education Rights and Privacy Act, allowing our children’s personally identifiable information to flow to outside contractors. Obama referred to this tsunami of data to vendors, businesses, foundations, higher ed, and corporations as “unlocking” the data. President Obama has stripped our children of their privacy and undressed their psyches for ANYONE to track and traffic attitudes, values, beliefs, and dispositions for research and reeducation programs.

In the West, a fundamental shift is beginning to be felt, as the American idea of individual freedom clashes with the political purpose of control and submission. The outcome will depend on if individuals refuse to submit. The goal of those implementing the fundamental transformation of education have the stated purpose of controlling the attitudes, values, beliefs and behaviors of the next generation of Americans. The question then becomes… Whose attitudes, values, beliefs and behaviors?

Here are the names and telephone numbers to the Senate Education Committee.

Call them and say VOTE against Donna Campbell’s bill SB 276 due to National Security Concerns.