Republicans and Democrats are for School Choice and Charter Schools

In Texas, the grassroots networks (tea party and otherwise) are very interconnected with think tanks such as the Texas Public Policy Foundation (TPPF) and non-profits like Empower Texans (ET) at a state level, and Heritage and Heritage Action at a national level.

I have lived in that world for the last 9 years. I can tell you, I have learned a lot over the years.

The battle where I have gotten crossways with these groups has been the false narrative they push of parental rights and government regulated “School Choice”. This was clearly seen in the battle against SB3, Jeb Bush and Betsy Devos backed Education Savings Accounts (ESA)s and most recently the battle which killed HB21, the public school finance bill.

I have been strongly against the false narrative of school choice because the reality is, it will destroy our state constitutionally mandated traditional public schools with locally elected school boards. I have described it as a revolution through education. Revolution meaning to change our form of government from a “Constitutional Republic” (with local representation) to a “Democracy”. Our forefathers warned us against being a Democracy because it leads to mob rule.

“Hence it is that democracies have ever been spectacles of turbulence and contention; have ever been found incompatible with personal security or the rights of property; and in general have been as short in their lives as they have been violent in their deaths … A republic, by which I mean a government in which a scheme of representation takes place, opens a different prospect and promises the cure for which we are seeking.” — James Madison, Federalist Papers No. 10.

BUT, did you know…

Republicans and Democrats alike are working in coordination to strip Texans of our personal liberties and rights.

Case in point – SB 1882  Relating to a school district contract to partner with an open-enrollment charter school to operate a district campus and it’s companion bill HB 3439 .

As you can see, these bills are clearly a bi-partisan effort which will remove the authority of education from locally elected school boards. 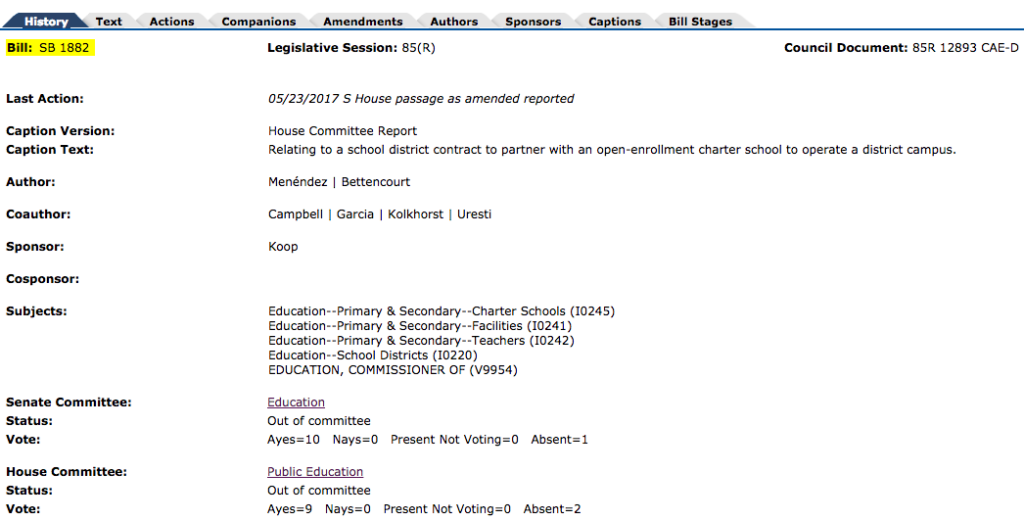 As my good friend, fellow mom, Angela Blackburn discovered after reading the bills and making some calls to authors and co-authors of this legislation these bills allow school districts to partner with charter schools to run campuses. There is a provision in the bill that required a memorandum to be created and posted. The local district committees comprised to create the contracted agreements between the public schools and the sought charters will be comprised ENTIRELY (on the district side) from boards, admins, and district employees ONLY!

NO PARENT COMMUNITY MEMBER APPOINTMENT TO THE CONTRACTING AGREEMENT COMMITTEE IS REQUIRED.

In other words, they will be creating an entirely STACKED DECK WITH ZERO PARENTAL/COMMUNITY INPUT! (This info was given directly from Sen. Jose Menendez’s staffer.  She also said Sen. Menendez WILL “concur” on the vote (therefore he will not recommend that he and Bettencourt’s bill be sent to a conference committee).

The staffer stated that Sen. Menendez is well aware that this is based on ratings from a terrible A-F accountability rating system that is also based on an admitted flawed and invalid mandated assessment.

The staffer also stated Sen. Menendez is aware that the large majority of parent community members will have NO IDEA that their locally elected board will be handing over their duty and responsibility to the appointed charter school board down the street (or wherever!) to run their school!!! Angela WAS APPALLED!!! in listening to her politely explain all of this to me.)

She immediately called Bettencourt’s office. His staffer said they are deferring to Menendez’s decision on the conference committee action. She asked if he was aware of all of the above, and then some.

Angela urgently requested that they realize this will be taking away our liberty of an elected body to govern our local school boards by allowing this measure and to PLEASE send this bill to a conference committee in light of the understanding. She urged that he should not want his name in ANYTHING that removes the liberty of locally elected representation.

From what Angela was told, Co-authors of the bill cannot send the bill to conference, but only the bill primary authors can do so.

Sen. Kolkhorst’s office was receptive when Angela urged for her to pull her co-authorship support and to urge Menendez to send to conference.

Join us in calling and urging co-author’s to pull their support and authors to send this bill to a conference committee.