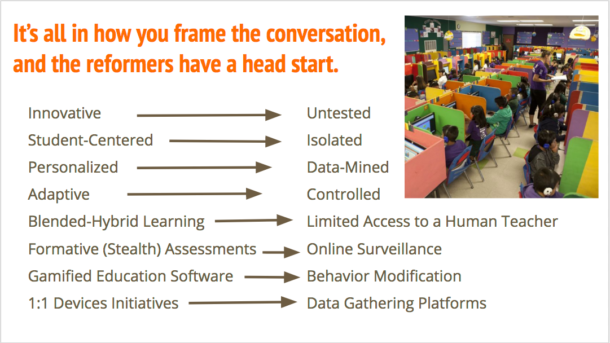 Theory of Unlearning & The Common Core

“We have succeeded only too well in selling the idea of extended schooling: yet we have only begun to think about the meaning of its near opposite, which is lifelong learning”. 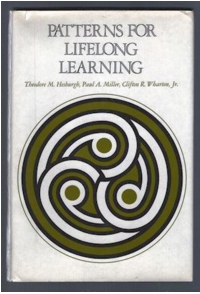 This riddle, cited in Patterns of Lifelong Learning1, gives a curious definition, even for a well-seasoned teacher, as every school district and training center in America uses the LL tautology. Apparently, this Lifelong Learning riddle is not exclusive to loving to learn throughout one’s life.

Lifelong Learning is more of a process than an outcome, as a step toward this outcome is unlearning how you think about the world; unlearn any adherence to dogma, loyalty, and heritage that finds you different than your global neighbor. The Theory of Unlearning is the opposite of extended learning. Schools in Soviet Russia called it re-education. Behavioral psychologists positioned the Theory of Unlearning into educational realms: Kurt Lewin called it ‘unfreezing’, Jack Mezirow more poignantly called it ‘transformative learning.’ Inherently, cooperative grouping of students and the emphasis on critical thinking skills set up the environment for practice in unlearning and relearning new paradigms of thinking about the world. The Common Core State Standards for English Language Arts set the environment for students to participate in unlearning practices.

A contribution to the Theory of Unlearning was penned in an ivory tower by James K. Feibleman, under the auspices of the National Society for the Study of Education2. Nine philosophers and their consultants were asked to undergird UNESCO’s Democratic Charter towards devising a common formula for global non-theistic re-education.  The Society’s biannual ‘yearbooks’ have been published for private membership only (appendix ii). The  Greek translation of ‘professional’ means ‘to declare openly’. The hypocrisy of this professional Society is unconscionable. An online search for Feibleman garnishes his philosophical stance in brief quotes, the most popular being “a myth is a religion in which no one any longer believes”.

Feibleman plotted the philosophical ground of an unlearning theory, covering the obstacles of ingraining the attributes of global thinking and proposing a means to put his theory into practice. Strange, every contributor listed their resources, except Feibleman. His erudite definition of indoctrination in the classroom:

A proper education must consist of the eliciting of contradictions in the matter of unconsciously held beliefs.” (pg. 348)

Why might Feibleman be the best choice to subversively cultivate a theory of unlearning in classrooms? His unconscious axioms must lack in any convictions based on faith.

“The intelligent know how to think and to judge; hence, a belief has a harder time getting into their minds. The process of education requires as much effort and time to unlearn the wrong beliefs as it does to indoctrinate the right ones. It is the certainty of beliefs that must be placed under attack, for the fear of false knowledge is the beginning of wisdom.” (pg. 345)

This has been the crux of progressive school reform for 60 years: To Erase Any Previous Held Beliefs in Order to Propagate Children Who Never Believe That Anything is Self-Evident or Based on Faith. 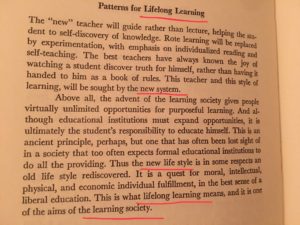 Creating an environment for students to engage in reflective (critical) thinking, begins with assessing the total experience and the axioms that a young child brings to schooling. Each culture rears their children in common traditions, rituals, and societal norms, more often having a common alliance within a nation. The ultimate purpose in unlearning is to create a world of thinkers that do not hold to one ideology over another.  It’s a tall order to encapsulate every culture under a system of non-ideological thinking. But, if government schooling can solicit the very young, pre-K toddlers, their mission is made easier, having fresh minds to nourish.

Once in school, a step in ‘unfreezing’ personally held habits of the heart lies in providing content that leads to a wide range of possible outcomes, opinions and/or answers. Within cooperative groups, students investigate social-real world problems and are directed to determine (research), analyze (examine the evidence) and evaluate (present opinions or surmise solutions). The use of critical thinking skills, also called higher-order thinking skills (analyze, synthesize and evaluate) is emphasized over lower-order thinking skills (having knowledge and comprehension). Students are to gain a ‘new perspective’. College texts similar to Education for Effective Thinking3 lists the ‘critical attitudes necessary for good thinking’ Examples:

Common Core State Standards for English Language Arts is replete with critical skills, so much so, one might envision a student body of skeptics. Looking at Reading Standards for Literature 6-12, all but 3 of the 20 standards direct students to analyze or evaluate. All but two of the Reading Standards for Informational Text for Grades 6-12 utilize critical thinking: http://www.corestandards.org/assets/CCSSI_ELA%20Standards.pdf

Grades 11-12 students: Determine the meaning of words and phrases as they are used in a text, including figurative, connotative and technical meanings; analyze how an author uses and refines the meaning of a key term or terms over the course of a text (e.g. how Madison defines faction in Federalist No. 10)

Grades 9-10 students: Delineate and evaluate the argument and specific claims in a text, assessing whether the reasoning is valid and the evidence is relevant and sufficient; identify false statements and fallacious reasoning.

Grade 5 students: Analyze multiple accounts of the same event or topic, noting important similarities and differences in the point of view they represent.

One can envision in the future a classroom of skeptics, working in groups, searching for truth and ultimately consenting to a reasoned opinion.  Feibleman, however, would correct our thinking and believing.

Skepticism is a stage in the process of unlearning, not an end in the pursuit of knowledge. We should not accept dogma-this is what we have been saying, but we cannot remain skeptics. (pg. 345)

Skeptical thinkers, maybe not, but students will develop habits of creating honest doubt.  On training, putting theory into practice, Feibleman solicits the “principles of conditioning, after the methods followed by Pavlov and the later behaviorists” (pg. 353). Noted behavioral psychologists following Pavlov are Carl Rogers, B. F. Skinner, Kurt Lewin, Jack Mezirow, and Jerome Bruner. Monitored responses measure the affective domain of thinking – a person’s attitudes, values, and beliefs. Common Core’s Statewide Longitudinal Database System (link to article ) was developed to fulfill the aspirations of the National Society for the Study of Education in data mining your child’s attitudes, emotions, perseverance, and values.

Feibleman reminds me of the Wizard of Oz, a self-made Platonic Guardian hiding behind a curtain, putting the fear of faith-based knowledge into the minds of our children. And, his theory of unlearning may have abided with him in his ivory tower, were it not for the consultants carrying the virtues of their various philosophies into American institutions that were not privy to the yearbook. Ivory tower scholars are so busy analyzing human nature and society and racing for the next call for papers, I wonder how they contain the mental rationale they so highly prize. The various forces of global education are beyond complete comprehension, and any attempt to condense them into any sane sensibility is beyond the scope of one article.

Lifelong Learning is the elixir of global education – a panacea for peace. Creating sameness in thinking will create generations of citizens who will never know the truth and never love anything for which they will die for.

2 – An Ontological Philosophy of Education, J. K. Feibleman, contributing to Modern Philosophies and Education and  54th Yearbook of the National Society for the Study of Education; 1955, Chapter X. (pg. 343)