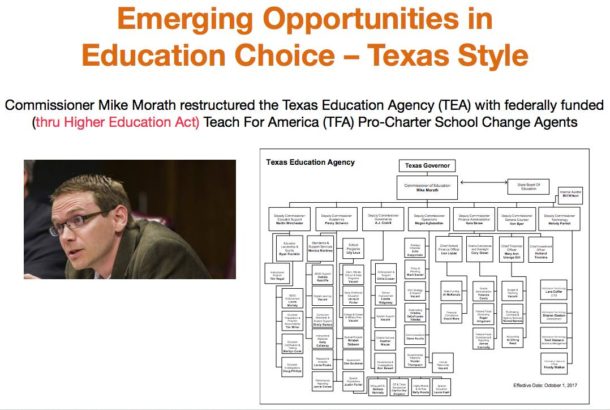 Question- How would you feel if your child came home with this as a homework assignment in their Math class? 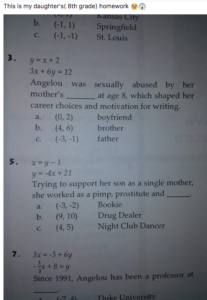 Here is a link to the full lesson.

It is important to note… “The assignment was from a website that allows teachers around the world to share resources.”

America we’ve got a serious issue-

I re-posted, on Facebook, the above homework lesson that garnered a lot of response.

The lesson is a perfect example of what the shift away from knowledge-based academics to the behavioral looks like.

This is known as “transdisciplinary” in Common Core/College and Career Readiness.

Transdisciplinary is when the function of the subject matter and course frameworks are all used to guide how a student views the world. The technical term most commonly used is lenses. Effectively these lenses become the values, attitudes, and beliefs the students are to be taking away from the curriculum.

It is NOT about math. It is about attitudes, values, beliefs, and behaviors.

Veteran teachers began commenting on the post. They knew the danger of this lesson.  While many parents were correctly angry about their child being exposed to talk of sexual abuse, in a math lesson, that is age inappropriate. Veteran teachers know, Maya Angelou aside, this lesson is a complete dumbing down of students.

Below is a comment from veteran teacher and education reform researcher Diana Anderson – Whom, I am forever grateful to for her insight and wisdom.

“I fear that this ludicrous example of a math test may be validated by the Council for Chief State School Officers (CCSSO) or any of their collaborators. After reading some of the comments posted on Brandon’s facebook page, I fear for the naive persons who do not see the danger in multidisciplinary schemes to water down mathematics and other disciplines. UNESCO published several volumes to address “integrating” the various disciplines – Blending the sciences/math with humanities would water down academics. Proponents against integration (multidisciplinary methods) state that “attempts at integration represent an erosion of intellectual integrity.” . . . to say the least. [Quote is taken from here: New trends in integrated science teaching: evaluation of integrated science education”

Teach math. In ELA, teach Angelou. No need to blend them. To which I responded…

🎯 You must be a veteran teacher.

Who is more likely to understand the danger of this type of lesson?

Interestingly, Dallas ISD has been a major target of Ed Reformers such as former Superintendent Mike Miles and former Dallas ISD School Board member, and current Texas Education Commissioner of Education Mike Morath.

There has been a major push in DISD and frankly across the state and country to eliminate veteran teachers who actually do know better.

Did you know that Texas Commissioner of Education, Mike Morath, has restructured the Texas Education Agency?

One of the most controversial hires being AJ Crabill, Deputy of Governance of the TEA making $180k a year and whose highest attainment of education is a high school diploma. Additionally, Crabill, also known as Airick West, was a major Democrat community organizer. It looks like he had to change his name due to ethics violations in Kansas City.

“As deputy commissioner of academics, Schwinn oversees the agency’s policies on testing and academic programs, including special education. Hired in April 2016, Schwinn spearheaded a no-bid contract with a Georgia-based company last year to mine data from thousands of students receiving special education services and to help create a long-term plan to help kids with disabilities. When advocates protested, the TEA terminated that contract in December, after spending $2.2 million for services rendered, and vowed to review its contracting processes.”

As noted in the video “The New Patronage”, Mike Morath has restructured the TEA to align with a carefully crafted network of reformers trained by TFA, Broad Academy, and the Aspen-Pahara Institute put in strategic positions of power in order to disrupt the traditional public school system. The agenda undermines local governance and circumvents the democratic process.

The question is, with the PUSH for Teach for America (TFA) Leaders, NOT Teachers.
Will America’s children be dumbed down?

As stated above, veteran teachers would know the lesson above is wrong on so many levels, not the least of which is the complete dumbing down of students. Especially students whose families can not afford a tutor to actually teach their child math.

A Teach for America leader/facilitator has 5 weeks of training. They are basically trained to go find lessons on the internet. They do not know any better. They just know… Google it!

It is key to understand

There is a fundamental “SHIFT” occurring in education today. Some will say it is 21st Century Learning.
The truth is, technology is the only 21st Century thing about it. These are the same battles that were fought in the past; beginning in the 1930s and more recently, in the late 60’s and early 70’s and again in the late 80′s and early 90′s. It is what was coined back then- Outcome Based/School to Work education.

Below are the purposes behind the College and Career Readiness/Common Core National Standards now codified into law through the passage of the Workforce Innovation and Opportunity Act (WIOA) and the Every Student Succeed Act (ESSA).

These globally aligned college and career readiness standards are now in ALL 50 states.

Take the time between now and Thursday, Feb. 8th to watch the important videos in this link. Then, join us Thursday night for the Women On the Wall Communication Team Conference Call. Call in with questions for our special guests, Jane Robbins and Jakell Sullivan – Call-in information can be found by clicking here.

If you want to truly understand why they are sexualizing our children through the lessons in their classroom, please take the time to watch this important presentation by Utah Mom Jakell Sullivan. Jakell is Co-founder – Return to Parental Rights. Her presentation is “K-12 Assessments: The Powerful Culture War No One Is Talking About” 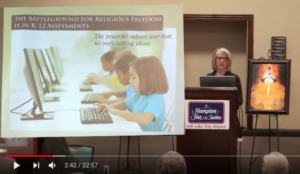 Jane Robbins, a senior fellow with American Principles Project, was one of four witnesses to testify during the House Committee on Education and the Workforce’s hearing on Evidence-Based Policymaking and the Future of Education.

Below is an outstanding breakdown by Dr. Karen Effrem of Jane Robbins testimony to the House Education Workforce Committee. 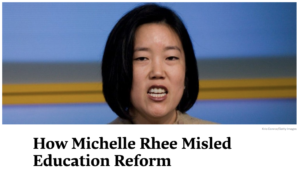 Michelle Rhee is mentioned about in the “New Patronage” video above. I encourage you to take the time to read this article.How Michelle Rhee Misled Education Reform: A memoir illustrates what’s wrong with her brand of school reform

“After college, Rhee joined Teach for America, which placed her in an inner-city elementary school in Baltimore, and then she enrolled in the Kennedy School at Harvard. Rhee makes a big impression on people. One of them was Wendy Kopp, the founder of Teach for America, who asked her to start a new organization that would supply school districts with new teachers in numbers beyond what Teach for America itself (whose magic in the elite universities where it recruits comes from its being highly selective) could generate. Rhee called that organization the New Teacher Project.”