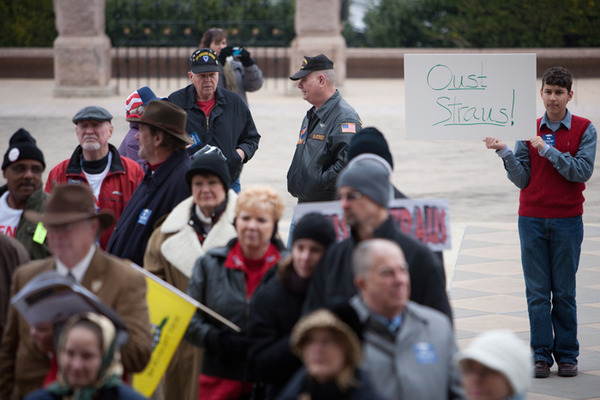 What If Ken Paxton would have taken a “STAND”~

Many grassroots Texans are well aware that one of the big hurdles to stopping Texas from turning Blue is- House Speaker Joe Straus. Many of us have spent the last few years in the battle to get him out of the most powerful seat in the state.

From the first video we produced to expose the pledge card system…..

…..to clearly defining the battle for the Texas Speaker Showdown. We wanted a vote on the floor of the house and that is what we were promised.

On the night before the vote for speaker of the house and after the caucus vote Grassroots Texans who spent their time and treasure were encouraged to hear that no matter what Ken Paxton would “Take it to the Floor.”

All bets were off and Ken Paxton would no longer stand.

What if Ken Paxton would have actually followed through in the Speaker Showdown with Straus?

Reps like Rodney Anderson (1 of the 30 who did not stand up for Straus in Caucus) indicates that he would have VOTED FOR Paxton if Paxton would have just kept his name in nomination (since there was no one else to vote for and because of the HUGE amount of pressure the grassroots were successfully putting on their State Reps.

If Ken Paxton had kept his promise, no telling how many would have felt the pressure to vote for him on the floor and even if he did not win in 2011 – 2013 would have been a totally different story the next time around.

I would love to hear what you think after listening to the two short clips above?

“Paxton was sitting on around $800,000 in campaign funds. Paxton had no serious challenger and could have used the money to help out his fellow conservatives who were being attacked in the election by Straus. In the end, I can only find where Paxton ended up giving money to one of the State Reps, Jim Landtroop. A small $2500 donation while he sat on much more.”

I know many at the time questioned whether Ken used the Speaker’s race to jump start a run for higher office. With what was reported by Bellows that question becomes more relevant because the perception is that it was a jump start financially as well.

I also agree with David Bellow’s statement below.

“Bottom line, Paxton is not a liberal, he is a conservative. He is NOT the best man to be our next Texas Attorney General though. He is no Ted Cruz. Paxton has proven that he WILL back down when the going gets tough, even after promising not to back down.”