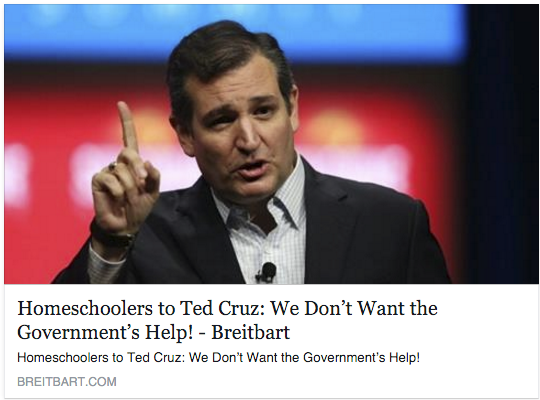 What is so interesting about this article is that I was interviewed for  45 minutes by Alana Wise; which makes the Pro-HSLDA Cruz Homeschool Coalition angle of this article very perplexing.

I know of many homeschool parents and grandparents across Texas and frankly across the country, who do not wish to be represented by (HSLDA) Home School Legal Defense Association’s Will Estrada, who is the “Homeschoolers for Cruz” coalition co-chair because of HSLDA’s push to federalize education in the United States.

Frankly, there has been quite the controversy with HSLDA and Will Estrada in recent weeks that I know Alana Wise is well aware of but seems to  have conveniently forgotten to mention.

If you click the link below your can listen to a sound discussion on Presidential Politics, Cruz’s support of  S. 306 and Cruz and Rubio’s support of WIOA (Workforce Innovation and Opportunity Act) with Special Guests: Homeschool Mom of six Karen Braun from Detroit, Michigan and Oklahoma education activist and mom Linda Murphy.

This is exactly why people are beginning to NOT trust Ted Cruz and those he has chosen to surround himself with. HSLDA’s Will Estrada and his deceptive tactics have done more damage to Ted Cruz’s campaign than anyone. You can’t play identity politics if all you have is an e-mail list and the population of people you claim to represent does not support you.

Like it our not…. below is why Donald Trump will win.

Will a young person get a good job if they know how to read, write, do math and know history?

Or, will a young person get a good job if they believe they are a Global Citizen who can “Save the World” and believes in “gay marriage”?

It is time to say it like it is, and educate our kids with a foundation for an education of opportunity, not an education based on civil rights and equal outcomes.

In the words of James Carville – “It’s the economy stupid”!!