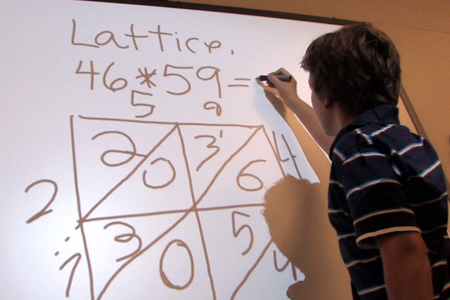 I sent Nakonia Hayes, an experienced math teacher and author of Saxon Math Warrior, the following video produced by the Khan Academy on the subject of Lattice Multiplication. This is a method of teaching multiplication which is widely used in Common Core. I asked Ms. Hayes for her reaction to this video and to the lattice multiplication method:

Here is the link to the Khan video: 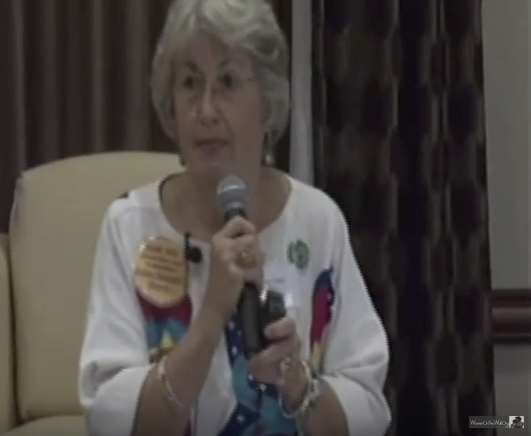 Welcome to Everyday Math and GOMath! I watched the Khan lattice multiplication video. Khan has sold out as one of those teachers who knows math that he learned with traditional methods but thinks this kind of math is more “fun,” which too many teachers equate with “learning.” (He even used the word “fun” in his explanation.)

First, to understand this method, one needs to know his/her multiplication table and place value. At the fourth grade level, where this method is heavily used in GOMath!, many students do not know these basic facts. Sooo, that means they are having to look up the products of factors on a multiplication table and then having to insert the digits in the correct spaces after having drawn and labeled the lattice.

Second, if students have a directionality problem, which many do (i.e., being able to switch mentally from one direction to another and not get lost), this method will lose him/her just in the drawing of the lattice, let alone in putting digits in correct spaces.

Third, look how much more time it takes to work a problem with this method.

Fourth, until someone can show me a significant number of students who improved their “number sense” by working multiplication problems this way, compared to those who work the problems in the traditional way, I see no advantage to teaching a method that takes a lot of additional and limited learning time and energy. (I need to see a majority of such students from all subgroups passing algebra in the 8th grade and then enrolling in higher math and science courses in high school.)

If taking a class test for 50 minutes that had 20 multiplication problems similar to Khan’s examples, a student could solve 17 problems with the traditional method and 9 problems with the lattice method. Assuming the traditional student got them all correct, he would have a score of 85. If the lattice student had all answers correct, he would have a score of 45. Or, does the teacher use a different “cut score” for grading that is based on methods and time used?

With division, using the traditional method, Khan worked for 2 minutes and 40 seconds. He worked for 4 minutes and 46 seconds with the partial quotient method. Again, it took almost twice as long to get an answer. In a 50-minute class with 20 test questions on division problems similar to his example, a student using the traditional method could, supposedly, answer 19 questions. The student using partial quotient could answer 10 questions. Under common sense grading, the first student could earn a 95 and the partial quotient student, a grade of 50.

The lattice and partial quotient methods are indeed “creative” and “unique” and, therefore, assumed (by some educators) to be “more interesting” and “more fun” for students. It’s one thing to show students these methods as an example of “another way” of solving multiplication and division problems. It’s another to have them master traditional methods that have been used internationally for centuries and which have proven to be the basis of efficiency in problem-solving when building great cultures and countries. There really is something special about learning these historically productive methods, compared to the alternate “fun” methods that have no proof of transcendence with similar success stories.

It is always nice to put a name with a face. Below is a video of Nakona Hayes at the Women On the Wall #CANiSEE the Solutions Conference 2014