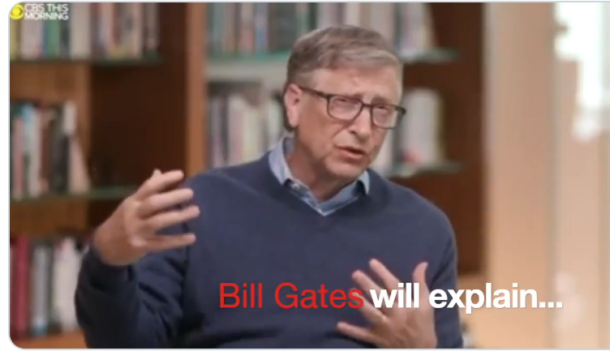 Today, on Palm Sunday, I was out taking in God’s blessings on a walk, listening to music on YouTube, and I hear a message… “STAY 6 Feet Away, you know the rules.”. So I looked around and there was no one on my trail at the moment. I thought to myself, now that is creepy!! Am I being monitored? NOOOO… Is that even possible? Well, yes, it certainly is.

Using algorithms for social change…
Back in 2016, I quoted data scientist Cathy O’Neil, author of ‘Weapons of Math Destruction’  in saying…
“An algorithm is an opinion written into code.” In this 12 min. summary, O’Neil gives her theory that algorithms are being used as weapons of social control through what she calls “the authority of the inscrutable”.

And that leads me to Bill Gates. As reported by Eileen Iorio on her post…
“Gates speaks on his vision for re-opening the world post #COVID19 – How rights will be restored based on mass vaccination status. Mass gathering (religious, entertainment, sports?) may NEVER come back.” YIKES!! 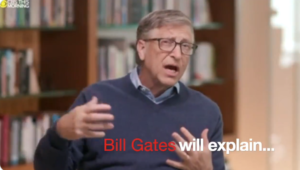 As David Knight reminded us…

So why is he the authority?
It’s HIS #Plandemic

“Remember what Gates did to education? He experimented with the state standards across America through the Common Core. Texas said no to Common Core but allowed it to come through the backdoor via the College and Career Ready Standards and rebranded textbooks. The majority of Texas standards (TEKS) align with Common Core. He knew his involvement in education was a giant experiment and we wouldn’t know for ten years if it worked. Well, it didn’t. I would caution anyone who follows him or listens to his direction:” Lynn Davenport

In 2000, the Bill and Melinda Gates Foundation gave the Texas Association of School Administrators (TASA) a grant for 6.3 million dollars. The full timeline link is here.

• TASA and the Texas Association of School Boards (TASB) are trade organizations who’ve been tied to the vendors/lobbyists for many years; and, of course, they pay for their agenda by using local taxpayers’ dollars which cover TASA/TASB dues, conventions, etc.

• Texas Leadership Center Date: June 2000 The purpose of the grant to TASA: to provide superintendents and principals from public and private schools access to quality leadership development focused on technology integration and whole systems change.

• In 2002 the federal government began the Statewide Longitudinal Data System grant program to offer grants to states that agreed to build their student data systems according to federal dictates (20 U.S.C. § 9501 et seq).

• In 2004 at Microsoft signed a 26-page “Cooperation Agreement with the UNITED NATIONS EDUCATIONAL, SCIENTIFIC AND CULTURAL ORGANIZATION (UNESCO) to develop a “master curriculum (Syllabus)” for teacher training in information technologies based on standards, guidelines, benchmarks, and assessment techniques. The Agreement states that . . . “UNESCO will explore how to facilitate content development.”Following the signing of the Agreement, UNESCO Director-General Koichiro Matsuura explained it in a speech. One of its goals, he said, is “fostering web-based communities of practice including content development and worldwide curricula reflecting UNESCO values.” No doubt that it is agreeable to Bill Gates because the Agreement states that “Microsoft supports the objectives of UNESCO as stipulated in UNESCO’s Constitution.”- Berit KjosMicrosoft “Cooperation Agreement”: http://eagleforum.org/links/UNESCO-MS.pdf Address by Mr. Koïchiro Matsuura Director-General of the United Nations Educational,
Scientific and Cultural Organization (UNESCO): https://unesdoc.unesco.org/ark:/48223/pf0000137509

Timeline with more dates can be found here: http://www.voicesempower.com/wp-content/uploads/2016/09/11-X-17-US-Education-Story-Board-CHART-US-Texas-Specific-2a.pdf?fbclid=IwAR2DLAB795t-BykCJJ8m-s5ayYAgmaJgZvqJW7xw1UPWx631J2jYrSnD3hQ

As Michelle Malkin exposed back in a 2017 documentary, EduTech is a data-mining racket. https://youtu.be/a0eKR0bVx4g

I agree with Cheryl K. Chumley … Bill Gates has some major coronavirus conflicts of interest. https://www.washingtontimes.com/news/2020/apr/2/bill-gates-and-his-coronavirus-conflicts-of-intere/?fbclid=IwAR0ZmtCOULRIttkPKSp38ejcvaRCJuq36AQetiFd3Ns32DjFSGnzSWfQFwI

NOW – Let’s hear from some actual experts on what the reality is on the ground, with respect to COVID-19.
There are important findings on #COVID19. please listen to Dr. Corsi’s 4/3/20 interview with Dr. Vladimir Zelenko and Dr. Karladine Graves, who is a trusted and dear friend of mine. –

The message is, have hope!! God is in Control!! NOT BILL GATES!!