If you are in the business world, it is likely you have heard the term Total Quality Management (TQM).

But, what if the “product” is a child?

In the 1990s at the National Governors’ Association meeting in Minnesota, (TQM) in Education was presented.  Included in the book ‘The deliberate dumbing down of America: A Chronological Paper Trail,’ was the following story.

IBM was sponsoring a session for administrators and leaders, at which a facilitator furnished by IBM was explaining how to introduce and implement the elements of TQM into local school districts. A curious superintendent raised his hand and asked the question “What if my older teachers don’t want to go along with these changes?” The answer was given without missing a heartbeat by the facilitator. She used her pointer and pointed to a box on the giant flowchart displayed on the screen behind her, then said, “You watch them, you document their mistakes, and then you get rid of them,” as she pointed to the box marked “Waste Management.”

I want to give you the timeline for what I call, the “Points of Compliance,” to create the TQM model of education in Texas. This will show a well-coordinated, bi-partisan plan that is precisely what we are seeing here in Texas today. A state, by the way, that said NO to the Common Core National Standards, but “YES” to TQM and College and Career Readiness Standards.

To begin, Hillary Clinton and the National Center on Education and the Economy (NCEE) in association with Marc Tucker pushed the workforce development model using TQM into the schools.

“With a visioning document for school transformation in hand, the group sought a means to begin work to fulfill that vision. They conceptualized a network of school districts that could do the work and described it in the Guidelines for Establishment of the High Performance Schools Consortium.”Interestingly, this document mirrors this Gates Foundation- High Performing School Districts; Challenge, Support, Alignment, and Choice White Paper: High Performance School Districts: Challenge, Support, Alignment and Choice

As Donna Garner wrote in her article….“Feds Choosing Each Student’s Vocation” and as we discussed on the Women On the Wall Conference Call,

“two new Congressional bills that if passed would allow the federal government to control completely the vocational choices and the career/tech training of all students in America – public, private, charter, home schools.

Students would be “forced” into certain vocations chosen by the federal government – not based upon the student’s own talents and desires and not based upon parental guidance.

Students’ vocations would be decided based upon the economy and the commerce in each regional area.

Federally controlled certifications and federal dollars would dictate who gets a job.

America is built upon the premise that all citizens are free to determine their own future and that every student should receive a deep and wide, foundational education. This then gives the graduate the ability to be flexible to change vocations during her/his lifetime.  It is the Socialistic model that allows the State to determine people’s vocational choices.

Public-private partnerships were originally meant to help build the schools but not TO RUN the schools. Now through Obama’s Common Core Standards Initiative and these pending Congressional bills (HB 5587, S 3271), public-private partnerships are to be enshrined. They would determine the curriculum that is to be taught since teachers’ evaluations would be measured by their students’ career-tech performance.

Personally identifiable information, psychological tracking, social-emotional learning – all are being collected on a huge national database created by the Obama administration under the Common Core Standards Initiative.

The term “assessments” is being changed to “evaluations” which allows for individual, non-academic measuring of social-emotional learning; and the monitoring and the tracking of students Pre-K through adulthood would become a reality.

The creation by the federal government of a psychological profile of each person in America is Hillary Clinton’s 1998 “cradle-to-the-grave” agenda coming to pass.

Morath’s new deputy commissioner positions, created as part of a sweeping reorganization of the Texas Education Agency have been filled as follows. 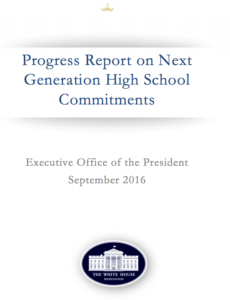 In classrooms across Texas and frankly the country, parents show up to register their child for school and there is NO way to easily say… NO-  my child needs to be taught by a teacher, not a computer and my child’s data is not to be shared with any third parties without my consent! Parents are informed they cannot refuse technology for their child while in school because it is now required that they are “21st-century learners”.

This is a well-coordinated plan, as seen above, to change the next generation of American children’s worldview from nationalism into globalism and allows for a government controlled economy.

We did not have our three children to be a guinea pigs for the state, much less, human Capital, a “product,”  for the state or federal government to be modified and manipulated through a TQM system of public/private partnerships.