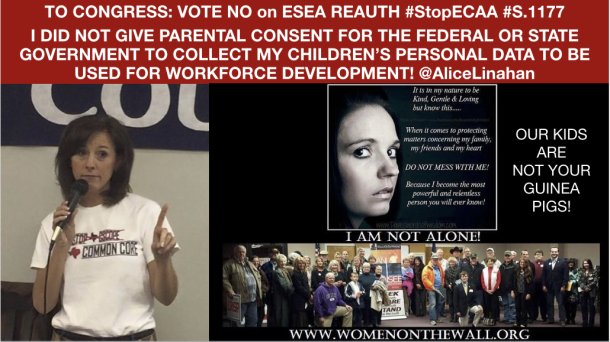 Hat Tip to Donna Garner for her latest post seen below.

HORRIFIC SENATE NCLB REWRITE BILL- What to say to Senators!

ACTION STEP — CALL U. S. SENATORS:  The NCLB rewrite bill (ECAA) in the Senate is close to final passage. Here are pointers on what you need to say: Click graphic for contact info for all U.S. Senators

There were  rumors that the final votes on amendments and passage for the Every Child Achieves Act (ECAA) [in the U. S. Senate] could have been as early as Monday or at the latest by Wednesday (July 15th). Apparently because parents and teachers have seen through the shiny but false promises about how this Senate reauthorization of No Child Left Behind (NCLB), restores state sovereignty and parental control, is an improvement over NCLB, and supposedly lets states out of Common Core and testing mandates, the plan is to finish the bill before more opposition can be raised by those of us who know the truth and oppose this bill.

Details provided in the list by the American Principles Project show how the prohibition on federal involvement with standards are completely false.  This is especially important because presidential candidate Jeb Bush is perpetuating the falsehood that the prohibitions against federal control of standards are real.  In the following audio clip from a conference call with Alabama Republicans, Bush bragged about how he got his good buddy Senator Lamar Alexander to put this prohibition in the Senate bill (listen starting at 2:32).

The problem is that this type of prohibition was already in federal law in three places.  That did not stop the current administration from bribing and blackmailing states to adopt Common Core.  In addition neither the old or the new language contains any enforcement mechanism for the states that are coerced or bribed.  Either Jeb Bush is ignorant of this situation or he is knowingly participating in the deception.  Neither situation reflects well on him, especially since he portrays himself as such as education guru.

As we have  chronicled in detail before, the other problems with and dangers of this bill are almost too numerous to count, especially in the areas of  psychological profiling and expansion of federally controlled invasive early childhood programs.

These provisions are further evidence that promised protections for states, districts, family autonomy, teacher control and student privacy are false.

========
7.13.15 — Anita Hoge has also provided a wealth of documentation to verify how the federal government’s tentacles are continuing to wrap themselves around our nation’s schools and school children. Please share this with both House and Senate members:

Paying For Title I Portability

How Will Title I Impact Your Community

This is the message that I sent on 7.9.15 to many Congressmen regarding the reauthorization of NCLB – “Not under this President nor with this feckless Congress” —  http://www.educationviews.org/comments-house-members-disappointed-vote-yesterday-hr-5/