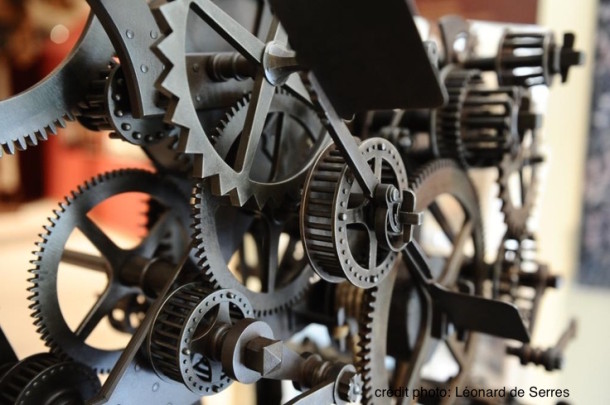 The Transformation of Education in America that is legally locked in place now that the ESEA (Elementary and Secondary Education Act) now known as ESSA (Every Student Succeeds Act) is re-authorized. (Updated).

Within the pages ESEA reauthorization bill, we know that it mandates a shift away from academics- reading, writing, math, and history being taught and tested in the United States. ESSA is a clear shift to social and emotional learning (SEL), affective and non-cognitive attitudes, values, beliefs, behaviors, changing American students’ worldview.

How do I know this? Because, unlike our elected officials, I have been working with folks who have actually read the language and understand the binding impact included in the current bill. Which was voted on, by people who have NOT read the bill and who do NOT understand the terms and the language they voted on.

Most people do not know that the National Universal Design for Learning (UDL Task Force) works to incorporate the principles of UDL into federal policy and practice initiatives. As my friend Lidia informed me, more than forty national organizations have joined together to recommend UDL legislative language for the reauthorization of the Elementary and Secondary Education Act (ESEA).

If you dig a little further, another Mom Trisha Anderson exposes  UDL’s parent company, CAST, Inc is funded by none other than the Gates Foundation and the US Department of Ed, among others. They couldn’t possibly have an agenda, could they?? No conflict of interest??http://www.cast.org/about/funders.html#.Vl6b5XarSHs
The narrative coming out of the proponents of the ESEA Re-Authorization is that they have to pass this version because it gives rights and control back to the states.
For example: Texas Representative and Freedom Caucus Member Brian Babin explained to his constituents why he voted for H.R. 5 the House version of the ESEA reauthorization.  Congressman Babin’s Tyler County Booster Op-Ed 8-20-15 PDF

Babin explains…. “As students, teachers and parents prepare for another school year, I’d like to take this opportunity to update you on a few of the things I am working on to restore local control and prevent federal intrusion into our classrooms.

Despite 40 years of increased federal involvement in our local schools, federal regulators are essentially coercing local schools to adopt national “Common Core” education standards. I’m working to end it and defund it. Bureaucrats 1,400 miles away in Washington’s U.S. Department of Educations fail to understand that the American people want less Washington intervention – not more. I trust parents, teachers and local school boards to decide what’s best for their students, not a bureaucrat in Washington. During consideration of H.R. 5, the Student Success Act, I voted for the Zeldin Amendment, which guarantees states the right to withdraw from this broken, one-size-¡t’s-all approach whether that is the Common Core standards or any other federal standards.

Repealing No Child Left Behind (NCLB)

Last month, I voted for House passage of the Student Success Act (H.R. 5), which takes much-needed steps to repeal NCLB and return power and authority to where it belongs – with parents. is important legislation reduces the federal footprint in education by eliminating dozens of ineffective and duplicative programs, preventing the U.S. Department of Education from coercing states to adopt federal mandates – while also empowering parents with the information and tools they need to hold schools accountable. Importantly, it also cuts the number of federal employees at the Department of Education, which I view as a first step toward eliminating this failed bureaucratic institution. Local schools will be better protected when there are fewer federal bureaucrats dreaming up new mandates for local schools.

Many low-income students, particularly in urban areas, benefit from school choice initiatives because it allows them to leave a failing school and attend a different school that they otherwise couldn’t afford. I believe that school choice initiatives should be available to children who are trapped in bad schools. That’s why I have voted for and supported efforts to create more school choice options through expanding magnet, charter, and public schools. We should also expand private school opportunities for those trapped in failing schools.”

Now let’s talk about the reality on the ground and shine some light on the system that is in place to lock the Global Vision System, in place no matter where the implementation point is.
As Katy ISD Mom Kim Belcher has uncovered. They are trying to give the impression that the states get to choose, but as you will see with these docs, it is a farce.  They tell the states what to do and then the states get to polish it with whatever else they want to add.
This is what they mean by the “alignment” of “Challenging State Academic Standards” in the ESEA re-authorization language.  They lend the impression that states get to create their own standards.  The truth is, they are given the standards by whomever their pass through is.  In this case, Texas State Board of Education (SBOE) was directed by the president of one of our prime lobbies, Texas Association of School Administrators, TASA [Member of the UDL National Group] as to what the framework would be.  You will see that the framework was designed by Shirley Dickson, consultant to National Assessment Governing Board and the Education Commission of the States. They meet the “Public Comments” requirements by hiring “experts” who are actually heads of other big lobbies. Our education is being funded by taxpayers and directed by non elected people that are financially and politically benefiting from the federal system.
In essence, you will see that even though this is just the ELA/R piece for Texas, this is the model that is already being used.  They didn’t wait for ESEA.
This is the email from TASA to the chair person of the TX SBOE.
I have attached the framework documents.
From: Johnny Veselka < jveselka@tasanet.org>

Sent: Thursday, September 3, 2015 3:52 PM
To: Bahorich, Donna
Subject: ELA/R FrameworkDonna,
I have attached a copy of the updated ELA/R Framework with alignments to the College and Career Readiness Standards, SAT and ACT, along with a cover letter to the members of the State Board of Education.
The letter describes the ongoing work of members of TASA, TXASCD, and the six literacy organizations since our presentation to the SBOE at your July meeting.As stated previously, the Framework design began with the current TEKS.  The participants considered the expert reviewers’ comments regarding the current TEKS as well as their comments regarding the initial framework that was shared with the Board in July.
To provide the greatest opportunity for student success, the CCRS standards were backward mapped into the framework, which is also aligned with the SAT and ACT standards.  These alignments are noted in the document. I believe this collaboration by experts in the field has resulted in a research-based structure and a beginning point for the review committees that will promote rich discussion among the review committee members while also guaranteeing efficient use of their time.  It focuses on rigorous student achievement goals as recommended by Shirley Dickson and is unanimously supported by these organizations. As we did in July, I wanted to share these documents with you in advance of the Board meeting.
I look forward to visiting with you regarding any questions you may have and hoping it might be possible for you to share this document with the other SBOE members prior to the meeting.Johnny
Texas Association of School Administrators

It looks like my legislative proposal to allow states to withdraw from Common Core without penalty from the federal government…. 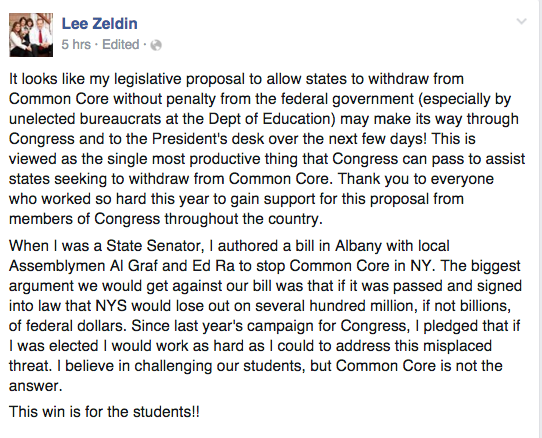 Posted by Lee Zeldin on Tuesday, December 1, 2015
It is all just a big show. They know if #ESSA is actually read they are BUSTED!! Guess what~ We’ve read it!!  YOU ARE BUSTED!!

Zedlin’s Amendment means nothing. From the link below…..

Sec. 1111(b)(1)(D)(i): IN GENERAL.—Each State shall demonstrate that the challenging State academic standards are aligned with entrance requirements for credit-bearing coursework in the system of public higher education in the State and relevant State career and technical education standards.

Proof ‪#‎ESEA‬ is the ‪#‎NewCommonCore‬, which is not about teaching our kids to read, write and do math. It is about attitudes, values, beliefs, and behaviors! The state and federal government has no place mandating and conducting, psychological profiling of our children. Call and demand your U.S. Senators who will vote on this bill early next week- ‪#‎StopESEA‬!

So now the question is…. What are we going to do about it?