I have a question for all elected officials, on both sides of the political aisle- Are you for Jeb Bush’s ExcelinEd yellow scarves School Choice Week? Which, by the way, is the same thing Obama was pushing, he just called it National Charter School Week.   The end game is the same. A loss of parental rights and true local control. Along with the collection of private student data that will be used for online adaptive assessments and instruction to modify the attitudes, values, beliefs, and behaviors of American students by third-party public/private partnerships, who will then profit from the unethically and illegally obtained student data. 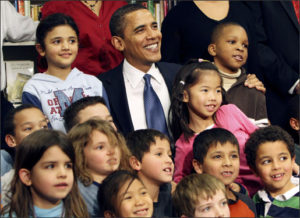 In Texas, I have heard those pushing so-called “School Choice” say they are for ALL school choice options. They will say whatever they are pushing is just one more tool in the toolbox for parents to choose. This is a ridiculous statement. Not all school choice is the same. In fact, government regulated school choice limits parental rights, it does not expand it.

In Texas, we already have “School Choice” written into the Texas Education Code (TEC), as Barbara Harless clearly laid out in her article… School Choice already exists in Texas

“Why then, does the Texas Legislature continue to reinvent the wheel with programs designed to force private schools to accept public money through grants or vouchers?  This is done under the guise of helping the poor inner city kids with their failing schools.  Actually, it is to control the private schools where the state has been unsuccessful before.” 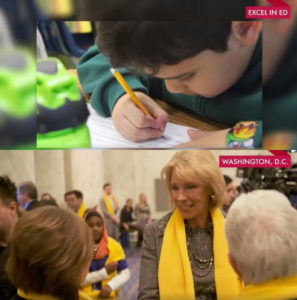 Jeb Bush’s ExcelinEd is at it again this year with the National School Choice Week, pushing #FakeSchoolChoice right along with Secretary of Education Betsy Devos.

Once again we are asking… Who is paying for all those yellow scarves? Yep, those who will profit off the backs of our children and their teachers.

Anyone for a blanket “School Choice” needs to understand what that actually means and just how dangerous it is.

What is happening in Houston ISD is Bad School Choice. And a major national security issue because of the Gulen Harmony School.

Education Reformers on both sides of the political aisle are going full force. Texas is the heart of the reform movement.

They have destroyed our education system intentionally, so they can rebuild it using Public/Private Partnerships financed through Social Impact Bonds (SIBS) or Pay for Success (PFS). They will profit off the backs of our children and their teachers. All while harming countless numbers of our children in the process.

The question is, who is willing to step up and protect Texas students and their teachers?

• every test must be aligned to these standards:

• curriculum and software is aligned to standards:

• everything listed here is aligned to government data collection compliance.

This is a very important article everyone needs to stop and read by Stanley Kurtz: The Politics of the Administrative State

Here are just a few excerpts:

“That critique focuses on a runaway bureaucracy’s threat to constitutional government. Congress has improperly delegated much of its law-making power to bureaucrats, who in turn have abusively expanded this authority. The courts, for their part, have turned a blind eye to the administrative power-grab. Meanwhile, agencies staffed by unelected bureaucrats now operate de facto courts. In effect, these agencies negate the separation of powers by simultaneously exercising legislative, executive, and judicial functions, the very definition of authoritarian rule. On top of that, administrative adjudication commonly evades constitutionally protected due process rights.

… Even governors and state legislators can be unaware of policy end-runs imposed by federal agreements with a state’s own bureaucrats. At both the state and federal levels, then, bureaucracy has broken loose and effectively turned into a national fourth branch of government. McGroarty, Robbins, and Tuttle expose the complex web of incentives and relationships that constitute this undemocratic governing structure. As they see it, when it comes to federalism, the administrative state is winning and the Constitution is on the ropes.”

Purposes Behind Common Core/College and Career Ready National Standards now codified into law through the passage of the Workforce Innovation and Opportunity Act (WIOA) and the Every Student Succeed Act (ESSA).
A FEDERAL UNCONSTITUTIONAL SYSTEM has been locked in place through the passage of federal and state legislation (designed like a set of gears) “rigged” if you will, to sort our children into positions within the workforce, based on the Soviet model. This is about controlling the next generation of Americans. You are no longer an American who lives in a global economy, you are a global citizen who happens to live in America.