This report from the State Auditor’s Office (SAO) does not deal with the questionable content of the CSCOPE lessons nor with the quality or validity of the curriculum management system itself.

The public will need to read the SAO report for themselves to get the full brunt, but I am going to attempt to put into my own words some of the most egregious findings in the report.

First, we need to remember that the ESC’s have no money of their own. They use our taxpayers’ dollars by which to operate, and history tells us that it is always easier to spend someone else’s dollars than to fork over our own. This maxim is demonstrated in the lax oversight of taxpayers’ dollars spent on CSCOPE.

Mt. Pleasant is the home of the Ratliff Clan: Bill Ratliff is a powerful ex-Texas Senator. Lt. Gov. and lobbyist. His son Thomas Ratliff has been a Microsoft lobbyist for eons yet is on the Texas State Board of Education illegally.  Bennett Ratliff was in the Texas House but was dumped in this spring’s primaries. 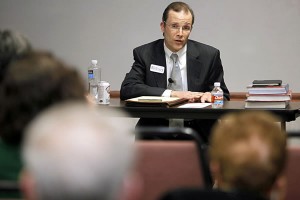 It is no coincidence that the first CSCOPE contract (2005) was struck between Mt. Pleasant ESC Region 8 and National Education Resources (NER).  The SAO report says that this contract “lacked fundamental provisions to help protect the State’s and taxpayers’ interests…”

We also need to remember that CSCOPE is digitized, and guess which company would benefit considerably from all digitized materials…Microsoft.  Thomas Ratliff just happens to have been a lobbyist for Microsoft for at least the last 12 years and has undoubtedly benefitted financially from the millions of dollars’ worth of CSCOPE sales.

Region 8 right there in the Ratliffs’ backyard did not “publish a request for proposals; obtain bid proposals from vendors for the development of the curriculum management system; perform a needs assessment to identify the key elements needed from the vendor; or obtain a legal review of the contracts.”

Get this: The Region 8 contract with NER was written on one page, “…did not specify a price, include a description of how fees for services would be calculated, include specification of deliverables, or provide details on ownership of intellectual property.”

The TESCCC was paid $1.16 Million in rebates, but the SAO “strangely” could not determine exactly how much in total had been paid to the Mt. Pleasant – ESC 8 because they had destroyed the documentation.

From 2005 – 2011, the ESC’s s paid National Education Resources, Inc. some $8.7 Million. This contract did not follow all of the requirements in Texas Education Code (TEC), Sect. 44.031.  The ESC’s used parts of the TEC to set up the CSCOPE contracts but ignored the part where they were supposed to prove that their product was the best value for the district.

The discrepancy between these two figures exists because the ESC’s did not all code their CSCOPE services in the same way.  Neither did they charge the same amount across the board for these CSCOPE services.

The SAO could not cover in-depth all 20 of the ESC’s; therefore, it chose to do a sampling audit by analyzing data from 9 of the 20 ESC’s. Please see pages 17 – 19 to see the wide fee variations among the ESC’s for various services.

Because of the helter-skelter way of accounting for CSCOPE expenditures among the 20 ESC’s, the SAO could not reach a well-documented conclusion to determine the amount of CSCOPE revenues and expenditures.

However, the SAO did uncover some very troubling CSCOPE activities. For instance, in one school year alone (even though CSCOPE was designed only for students in K-12), the Marshall ISD (Region  – Kilgore) included 296 of its early childhood education and pre-kindergarten students in its subscriptions for CSCOPE, ending up being overpaid thousands of dollars by the state. (p. 19)

Interestingly, ESC Region 13 – Austin did not disagree with a single recommendation made by the SAO’s report. Region 13 management knew they had been caught red-handed by the State Auditor’s Office.

A Summary of the Deficiencies Identified is found on pp. vi – viii.

The SAO’s Legislative Recommendations are found on p. vii.

Of course, most of us would like to see heads roll and ESC/CSCOPE/TESCCC/TEKS Resource System employees put in jail for their sloppy handling of millions of our taxpayers’ dollars. That probably will not happen, but I can tell you that if the Texas Legislature passes laws that follow the SAO’s recommendations (and I am reasonably sure they will), there will be many ESC/CSCOPE/TESCCC/TEKS Resource System employees who will be unhappy.

Under the SAO’s recommendations, the TEA, Governor, Legislative Budget Board, and State Board of Education will have to give their approval before the ESC’s can initiate, design, or construct anything like CSCOPE ever again. They will be forced to document that their products are in compliance with Texas’ required learning standards (TEKS). They will have to pass through stringent and accepted auditing processes for what they spend and take in.

The main thing gained from this SAO report is that the ESC/CSCOPE/TESCCC/TEKS Resource System employees cannot keep practicing the arbitrary and arrogant use of our taxpayers’ dollars.

Grassroots citizens have been vindicated, and the “Truth shall set us free.”