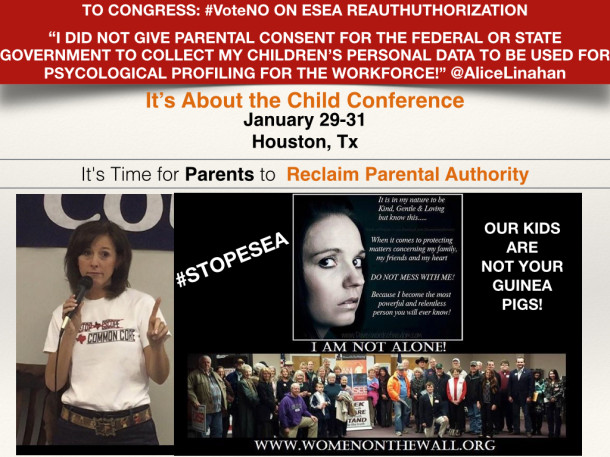 The re-authorization of ESEA (Elementary and Education Act) which is being pushed full force by Republican Senator Lamar Alexander, and Republican Representative John Kline, has passed both the U.S. House and Senate, is now in conference committee and when it emerges for a final vote will be well over 2000 pages long. The last time ESEA was re-authorized it was known as No Child Left Behind (NCLB) back in 2002.

In a coast to coast effort, parent and citizen groups, resisting the national and federal takeover of standards, testing, curriculum, and student data collection via Race to the Top and Common Core standards, are loudly voicing their concerns and opposition to the conference committee report being written for the reauthorization of the Elementary and Secondary Education Act (ESEA), currently known as No Child Left Behind (NCLB). This letter strongly urges suspension of work on this bill “until a new administration is elected that, we hope, will follow the rule of law and the Constitution regarding the proper federal role in education.” This request is being made because:

“…for a conference report to be acceptable to this President, given the administration’s dangerous record in so many aspects of the ESEA and related statutes and programs, the report would be completely unacceptable to us and our membership – the millions of families, students, and in many cases teachers, such as the majority of those surveyed from Tennessee that oppose implementation of Common Core, of this nation who are affected by these policies.”

The thoroughly referenced letter lays out fatal flaws with both the House Student Success Act (HR 5) and the Senate Every Child Achieves Act (S 1177) in extensive detail in the following areas, for all of which federal statutory or constitutional authority is extremely questionable or non-existent:

“The overwhelming response to this effort to protect the hearts and minds of our children and rein in federal overreach is extremely gratifying,” said Karen R. Effrem, MD, president of Education Liberty Watch, executive director of the Florida Stop Common Core Coalition, and one of the letter’s primary authors. “The unconstitutional federal overreach in education that is so damaging to our children and our future as a nation needs to end now, and stopping this legislation is a critical first step.”

“We know that you are hearing from many well-financed and powerful special-interest groups demanding completion of this bill in this Congress, but please hear the voices of those who are the closest to these precious children. Our children must not be trained to have arbitrarily determined “college and career ready” skills and be placed on paths chosen for them by government and corporate interests. The American public-education system must provide a well-rounded academic education to allow students to choose their future course and perpetuate the heritage of freedom that has made this nation the freest, most generous, most prosperous nation in the history of the world.”