It’s coming. Are our “traditional” public schools with locally elected school boards ready? Do they even know what is coming?

Our traditional public schools are being set up to fail; intentionally!

On the Women on the Wall Communication Team Conference Call our special guest was Dr. Patrick Huff, author of the ‘Take Over of Public Education’.   Here is a link to the archive of this call.

“Patrick Huff, Ph.D, is an experienced (retired) public school teacher and principal, who explains how “ESEA accountability”  was and is being used in the Lone Star State,  to crash public education and impose a new  tax-funded private school system using school choice with unelected boards.”

Here is important information you need to know. Dr. Patrick Huff explains how the  Accountability System and what is meant by a “failing school” in his post School Accountability Madness

On the Women on the Wall Call, Dr. Huff is going to explain what he has discovered now that the Elementary and Secondary Education Act (ESEA) has been reauthorized; now known as Every Student Succeeds Act (ESSA).

It is important for people to understand we have a new accountability system that is not tied to the old federal Adequate Yearly Progress (AYP).  The rhetoric has been from the state officials, like Governor Abbott’s newly appointed Commissioner of Texas Ed, Mike Morath, that we don’t have AYP anymore and that even the new AMO chart is outdated (although it is still being used to determine the priority and focus schools in the state.

The first photo is of the phase one and phase two implementation of STAAR accountability.  The percentages are individual passing for the students. This is what they have to make on the test to pass.  The first arrow shows where they want to take the students by 2017-2018.  The second arrow is where the passing percentages are now. Below are the photos so you can expand them and get the figures closer.  Key point:  The percentages have to be low in order to allow the student in urban schools to even have any chance of passing.  Even at this low percentage they are having difficulty.  These passing percentages for the students are going up.  The third arrow shows the final recommended target set for 2017-2018. 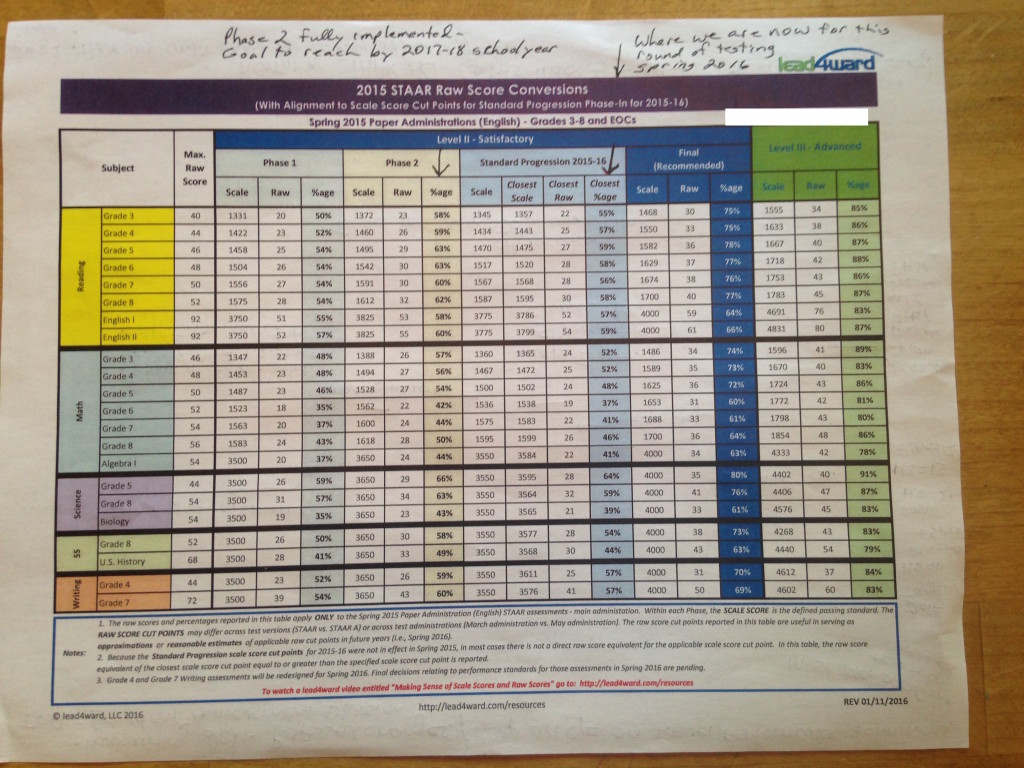 The second photo is a state school report card.  It shows the four indices used to determine if the school met standards or is labeled “improvement required” or IR. You can see that this school is “IR”.  They missed the target line in index four, Post-secondary Readiness. You can also see the target percentages for each index.  Index one is 55%.  Index two is not graded in this example because this is a high school and the end of course exams are not figured for student progress because they are only taken once.  All of these target percentages have been raised for this year’s test.  Index one is now at 60%.  These percentages are for the group, or entire school (not the individual percentage needed to pass).

The third photo is the Federal AMO’s.  Dr. Huff is still not sure how these enter into the picture in terms of moving schools to failure.  Some of the experts he’s talked to say this chart is going away.  Right now it is used to determine the bottom 5 % (called priority schools) and the schools that have the widest gaps between the subgroups (focus schools).  As of now the chart is still being used.  The main emphasis, however, is on the state accountability system. 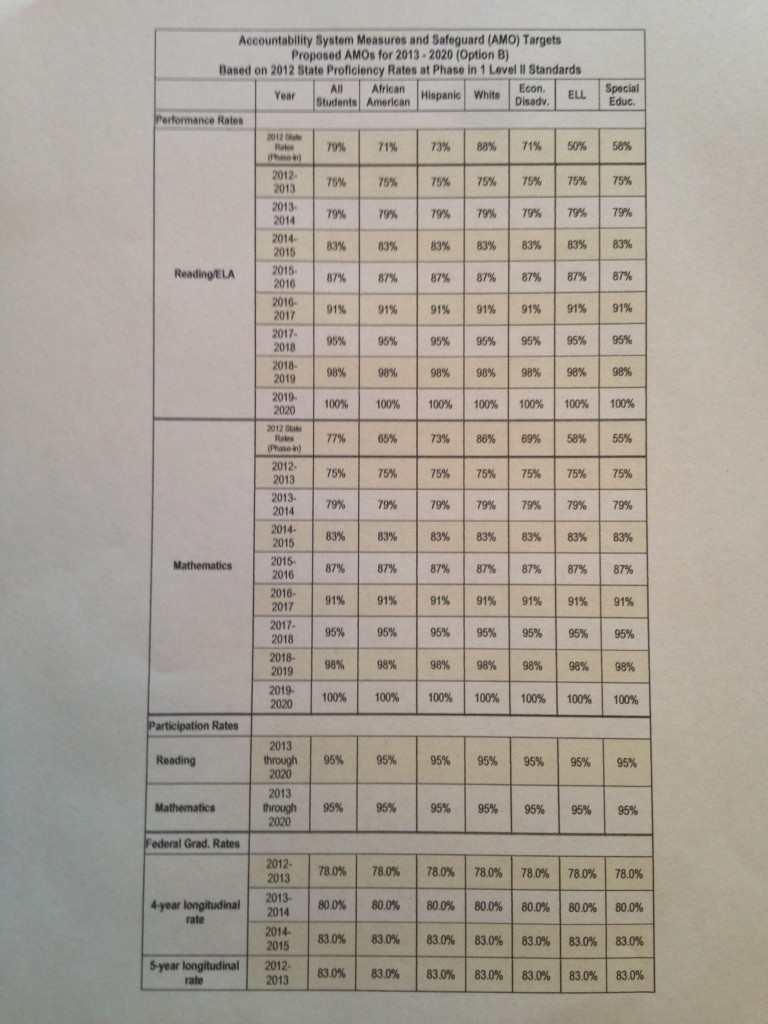 The fourth photo shows the federal accountability percentages by subgroup for a prominent school district in the Houston area. The percentages required has been scaled back from the AMO chart. Those percentages should have schools at 87% in all the subgroups for this year. In the example in the picture the %’s are set at 83%, but you can see that the percentages had to be scaled back. The TEA does not have the budget or the manpower to address all the schools across the state that are failing. 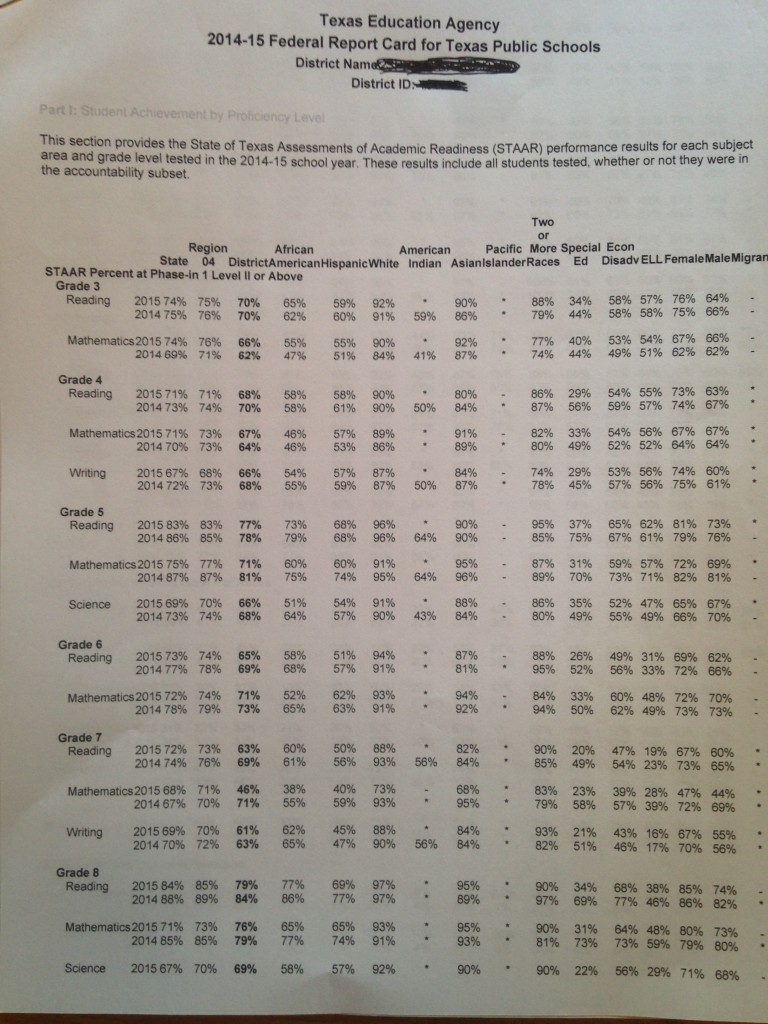 To get the picture magnified there is a sliding scale located at the top toward the left. Put your cursor there and move it right to magnify.

The thought is that the date of 2019-2020 is the date that they want to privatize; all districts go charter with the elimination of school boards.

Now is the time get educated. Join us tonight on the Women on the Wall Conference Call and let’s flush this out together so we can protect our children and our local TRADITIONAL PUBLIC SCHOOLS. 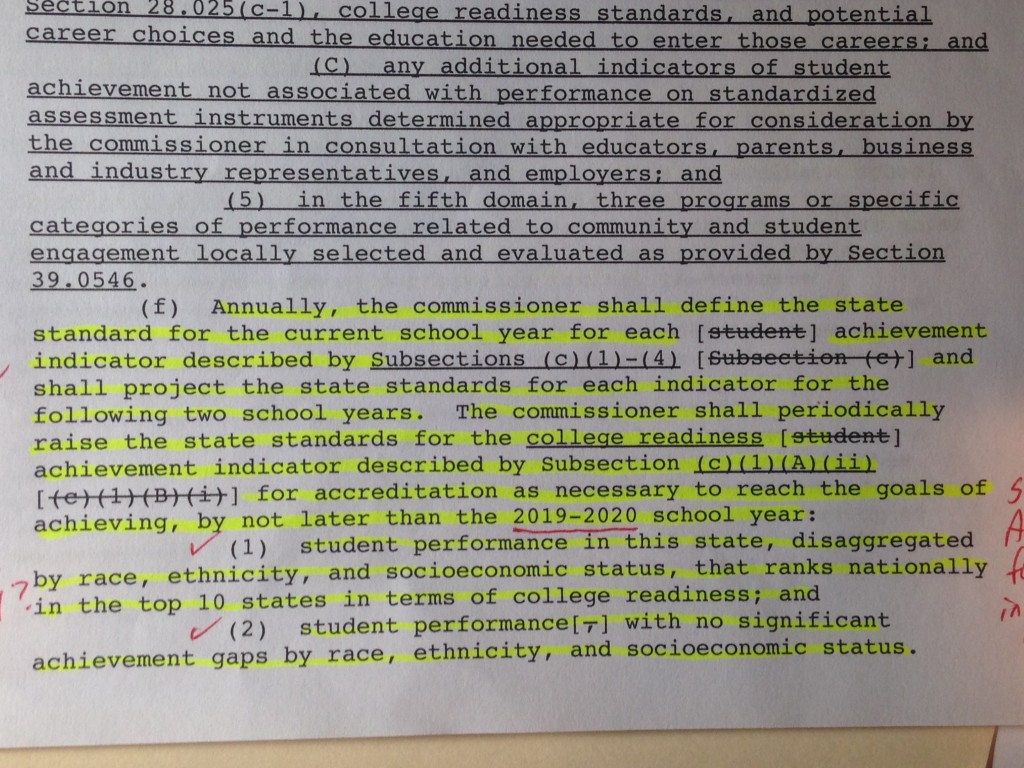 Dr. Patrick Huff Testimony in front of the Texas Commission on…Dr. Patrick Huff did an excellent job during his testimony before the Texas Commission on Next Generation Assessments and Accountability. Our traditional public schools have been set up to fail via AYP (Adequate Yearly Progress). Now through mandates of the Federal Government via ESSA, our Texas Legislature along with Governor Abbott, Lt. Gov. Dan Patrick and Speaker Straus are all working in lock step with the Federal Government to destroy excellence in education via the Next Generation Assessments and Accountability, as they move to education based on competency for the workforce. They are dumbing down education in America using the College and Career Ready/Common Core Philosophy of Education. 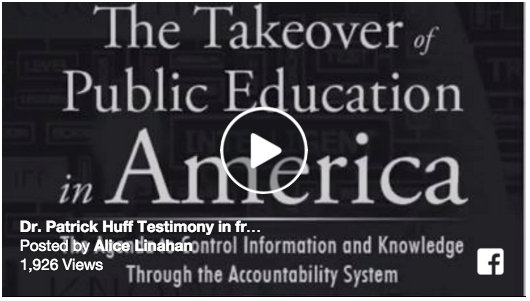