Personalized Learning to Control the Mind- ECAA the Reauthorization of NCLB

Have you heard the name Ervin Laszlo? Not to worry, neither had I before I started reading the work of Robin Eubanks.

Ervin László according to Wikipedia is “a Hungarian philosopher of science, systems theorist, integral theorist, originally a classical pianist. He has published about 75 books and over 400 papers, and is editor of World Futures: The Journal of General Evolution.”

If you read the work of attorney, Robin Eubanks, author of “Credentialed to Destroy” and the Invisible Surfs Collar.com  and listen to the audio of my interview with her playing now, the importance and danger to America of Mr.László becomes more and more clear.

“The title comes from a quote used in a 1963 book where Ervin Laszlo quoted J M Bochenski in the context of who would prevail in the Cold War and where the actual battlefields lay. Bochenski had written: “If the free world has any chance to win the spiritual struggle at the level of thought, it needs genuine philosophy.” By ‘philosophy’, Laszlo meant “a scheme of ideas” through which a student or an adult can frame what they perceive or ignore in their day to day life, and then use the supplied ideas to “unflinchingly explore the interpretation of experience in terms of that scheme.”

It turns out the “essential battle is waged at the level of thought” in the fundamental struggle between Individualism and Collectivism. That was the little discussed battle field where way too many professors were apparently looking for a synthesis between Individualism and Communism and creating theories and using pedagogy and never telling the rest of us what was up. It matters now though because I can go back into the books Laszlo published offshore in the Netherlands in the early 60s and read almost verbatim what is being enshrined as a federal mandate in the Every Child Achieves Act of 2015 as personalized learning.”

In America we have a history of great prosperity and innovation, because, in the past we have valued an Education of Opportunity (Equal Opportunity) based on an individual’s success and freedom to use their God given abilities to achieve great things. When a child has a solid foundation and can read, write, do math and knows history; as an adult that individual is free to succeed, and, free to fail, and then learn from that failure and go on to do great things and achieve the “American Dream.”

In America we have shifted from a Kindergarten -12th grade system of education to what is known as a P-20 W (Pre-School through the workforce) education of Equity (Equal Outcomes,) based on “Forced Equity”

Robin informed us in her previous post this is officially what collectivism looks like as described by Laszlo:

“The rights of individuals, organizations, nation-states, multinational, national, and regional actors are defined in relation to the equitable distribution of goods, services, and institutional patterns required to meet the demands of human need fulfillment on all principal levels, with especial attention to the basic needs for survival, safety, and group belongingness.”

Robin explained that “Laszlo recognized that perceived coercion a la the authoritarian states we started this post with creates hostility to changing values and behaviors as needed. He suggested that communication (one of the 4 Cs of 21st century learning) could be used to change the value and belief structures subtly. These planned “systematic communication techniques provide a much more suited and humanly dignified method of producing adequate responses in people than any coercive technique bypassing the individual’s will and self-determination.” Laszlo called this approach psychocivilization and both Competency-based education generally and the language used in ECAA just reeks of transitioning the US to it.”

As I have said before, now is the time for Moms and Dads to step back and start asking “ourselves” some questions……. When we send our children to schools across America; all schools, public, private and charter, are they getting what they really need academically to be a successful individual?

1. If our children graduate from high school or college with attitudes, values, beliefs, behaviors and a worldview that we oppose and we know it is because their teachers believe it is their responsibility to be the devil’s advocate and teach our children to question and even oppose the traditional, foundational beliefs of our family, our country and our religious beliefs; is that really a solid academic education that will serve our children and their future well?

2. Is our child being exposed and immersed in other languages and cultures more important than protecting America’s history by allowing the facts about generations of American’s sacrifices and their stories to be told and learned by the next generation of American children?

3. If your child graduates from college, gets a great high paying job but no longer respects, much less believes, they are worthy of a free and prosperous country, a strong marriage and that by the Grace of God anything is possible; have we done our best to give our children a strong foundation for a happy joy filled life?

The ESEA (Elementary and Secondary Education Act) was originally passed in 1965 to provide funding for children who were economically deprived. Interesting to note, in the Senate debate on S.1177 known as ECAA (Every Child Achieves Act) Lyndon B. Johnson was heralded as the hero of  the passage of ESEA. My friend Anita Moncreif exposed the true intention of Johnson back in the 60’s in the video below.

Since 1965 the academic knowledge and education of children in America has gone down tremendously under ESEA! That should tell us that the government can not educate our children and there is a “political purpose” of control behind much of education legislation today.

Anita Hoge whom we have had on the Women On the Wall Conference Calls recently wrote an Open Letter outraged about all the references in ECAA to social and emotional learning and non-cognitive factors and as Robin Eubanks stated… rightly so.

Open Letter to Secretary Duncan, the Council of Chief State School Officers and the National Assessment Governing Board Concerning Non-Cognitive Testing in Common Core/College Career Citizenship Readiness Standards and the Reauthorization of ESEA.

I have grave concerns about the direction that the Common Core Standards movement has taken. I am just as concerned with the ethics of testing in the affective domain. Recently, there have been several documents that reveal that the Chief State School Officers, CCSSO, the National Assessment of Educational Progress, NAEP, and the ESEA Flexibility Waivers you continue to grant to states are integrating affective domain/non-cognitive areas into the Common Core Standards.

February 20, 2014, it was announced that James Comer had been tapped by the Obama administration to present this agenda. The Comer “Pathway Method” implies that “magic circle” and other psychological techniques will begin once again, just like in the 70’s and 80’s. President Obama and James Comer know that parents do not want the school to delve into the social, emotional, moral, and the ethical development of their children.

Comer states that “executive function,” the part of the brain that gives us self-control and helps us stick with a task to its completion, doesn’t fully develop until we reach our 20s. Does this mean that P-20 schools will focus on “continual development from before birth to maturity?” Are we to believe that the school will model and mold the perfect personality starting with universal day care from birth as designed in President Obama’s Playbook??

Parents have no say in this systemic government portrayal of fake college and career readiness that will change personalities? Has government decided that this is the “missing link” for people control? Will “Promoting Grit, Tenacity, and Perseverance: Critical Factors for Success in the 21st Century” be the design for a diabolical scheme for people control through interpersonal skills and intrapersonal skills? Parents reject this idea and reject this trajectory. Click here for the full letter.

Is Ervin László’s Vision of controlling a society through controlling and manipulating the next generations minds, happening right before our eyes and no one can perceive that it is actually happening in America? Are everyday American Moms and Dads just not paying attention?

Robin Eubanks warns us that from her research in cybernetics for her second book as well as what she has in her Laszlo library. The desired and to be mandated mode of spontaneous, visual, relational comprehension HAS to be grounded in emotion or as Laszlo admitted “we then assign a concept to the cloud which is primarily emotional in nature but which serves as efficiently as the rationally derived concept in transforming the perceptual into conceptual, and thereby making it comprehensible.”

That may be but one mode of comprehension is easy to manipulate, harder to get caught abusing, and is far more likely to be conducive to a systematic presentation of new Ideas to transform a society or economy around. Say like the ideas of Equity, Debt Bondage, Institutional Racism, Climate Change, Social Justice, Democracy, and all those other Enduring Understandings or Core Disciplinary Ideas or Cross-Cutting Themes or other conceptual ‘lenses’ we keep encountering in the actual Common Core/ College and Career Ready classroom implementation.

I hate to have to be the one to join Robin and Anita and others bringing reality into the picture, but this globally coordinated effort is about equalizing and controlling the economy of the United States and the citizens of America.  You are no longer that boy from Amarillo, Texas who was a baseball star or in the band. You are now a global citizen. Not an AMERICA

I hope you will join us in our efforts to speak truth to power and bring facts to the people! You can make a difference. First by calling your 2 US Senators and demanding they VOTE NO on ECAA. Next call your US House of Representatives and demand they VOTE no on HR5. Both are very dangerous bills to reauthorize the original 1965 ESEA Act. 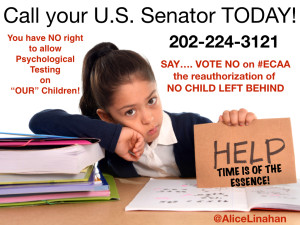