Have you heard the term “Replication” within the charter school movement? If not, you better learn about it.
The goal in the current school choice legislation, at both the state and national level, is to bring charter schools within the traditional Independent School Districts (ISD)s and through public-private partnerships, outside of the ISD model. This is very dangerous because of schools like the Gulen Math and Science charters and other international charter schools knocking at the door to get access to our tax dollars. Continue reading to find out more about “Replication.”

Is School Choice a National Security Threat? You bet it is!!

HAVE YOU SEEN THE DOCUMENTARY KILLING ED? I HIGHLY SUGGEST YOU GET A COPY, WATCH IT AND LET YOUR FRIENDS AND NEIGHBORS KNOW SO THEY CAN DO THE SAME!

Trailer for KILLING ED from Visual Truth Projects on Vimeo.

As I have said and will continue to say; the fundamental shift in education today is from a knowledge fact-based education of opportunity, where children learn to read well, write well, do the math and know history, to an education of equity-based on attitudes, values, beliefs, and behaviors. It is not about right or left, republican vs democrat. It is about power and control over the next generation of Americans.

College and Career Ready Standards and Assessments are merely a tactic to access students from Pre-K through the Workforce. After understanding the political ground games being played to manipulate legislation at both the federal and state level you begin to see key concepts and terms come to life. The terms used below by those seeking power and control in their webinars and at conferences are quite enlightening.

Both focused away from the Framers’ intent and towards the future.

“Governance is the process by which we collectively solve our problems and meet our society’s needs. Government is the instrument we use. The instrument is outdated, and the process of reinvention has begun. We do not need another New Deal, nor another Reagan Revolution. We need an American perestroika.”

The College and Career Ready Common Core push is actually the third attempt to Transform American Education from Opportunity Enriched to Equity Based in modern history.

Diana West, author of enlightening books such as The Death of the Grown-Up, and  “American Betrayal: The Secret Assault on Our Nation’s Character,” coined the phrase “Root Crisis”.  West goes on to describe it as “Crises are what we read about in the headlines,” “Root crises,” however, don’t make headlines, are never addressed, and are rarely articulated, especially by elected officials and others with lawful authority or even media platforms. For this reason, the crises that grow from root crises only multiply, and are never dispatched.”

When I saw the above graphic on Facebook, I thought of all the elected officials who know the truth about the fundamental transformation in education and choose not to confront it because they may not get re-elected or they are financially benefiting from the shift in education. Namely, Lt. Gov. Dan Patrick who has been warned over and over again about the Gulen movement and has done nothing to confront it.

The fact is, Texas did not need to implement the Common Core National Standards. We were apart of the creation of the first College and Career Ready Standards and a part of the American Diploma Project. We have been implementing the school to workforce template from the beginning.

Frankly all these Non-Profit organizations TASA, TASB, TAMSA, Raise Your Hand Texas, and Teacher Parent PAC, Texans for Education Reform (now renamed Texas Aspires), Texans for Education Opportunity,  are stakeholders in the shift of education no longer being about an individual’s success and opportunity in a free and prosperous America, to the collectivist education of equity in the 21st global economy.

Now, where does School Choice fit into the equation, and is it a National Security threat?
Much like Diana West describes “root crisis”

The political purpose of  Common Core and School Choice is not public and can be defined as revolution through education. Revolution; defined as “a fundamental change in power or organizational structures.” This is, in fact, a centrally coordinated, reorganization of American education that has global tentacles that are indeed a threat to American’s national security.

As defined in the book “Sharia, a Threat to America”–  “Civilization jihad is a form of political and psychological warfare that includes multi-layered cultural subversion, the co-opting of senior leaders, influence operations, propaganda and other means of insinuating shariah gradually into Western societies.”

In the West, a fundamental shift is beginning to be felt, as the American idea of individual freedom clashes with the political purpose of control and submission. The outcome will depend on if individuals refuse to submit. The goal of those implementing the fundamental transformation of education have the stated purpose of controlling the values, attitudes, and beliefs and behaviors of the next generation of Americans. The question then becomes… Who’s attitudes, values, beliefs, and behaviors?

The College Board’s new SAT and AP (Advanced Placement) assessments and conceptual frameworks can be described as “Transdisciplinary” in their purpose.

Transdisciplinary is when the function of the subject matter, concept themes in the syllabus, and course frameworks are all used to guide how a student views the world. The technical term most commonly used is lenses. Effectively these lenses become the values, attitudes, and beliefs the students are to be taking away from the curriculum.

You are no longer that boy from Katy, Texas who played baseball and was a Boy Scout. You are now a global citizen. Not an Individual and Not an AMERICAN.

The transformational shift of “what” and “how” the next generation of American children are taught is a movement Islamic jihadists are taking advantage of. A pre-violent tactic of jihadists, that is stealth and to many undetectable. The result of this is likely to lead to a violent jihad if Americans do not understand the gift of an education of foundational knowledge in reading, writing, math, and history. Compared to the common core philosophy of equity in education based on attitudes, values, beliefs, and behaviors.

Whether it is through the showing of documentaries such as, “30 Days Living as a Muslim,” in World History classes, without giving other monotheistic faiths the same respect and coverage, to desensitize the next generation to the threats we face. 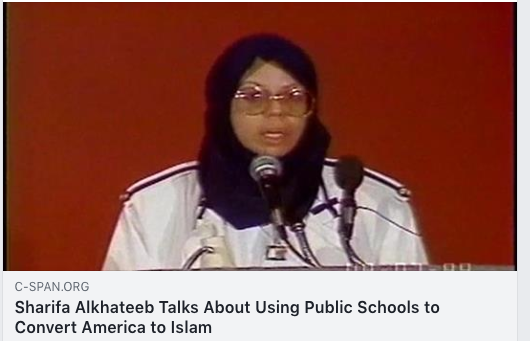 “Sharifa Alkhateeb (1946 – 2004) was an American writer, researcher and teacher on cultural communication and community building for Islam and Muslims in the United States. She was involved in feminist causes, domestic violence prevention, as well as interfaith and educational organizations. She founded the first nationwide organization for Muslim women in the US and was the first woman to receive the Community Service Award from the Islamic Society of North America.”

Much like Diana West describes in her book which documents the 1934 infiltration of a tightly organized Communist network based within government agencies. Today we have an infiltration within NGOs (non-government organizations) that have direct access and ties to our tax dollars that are then used to lobby and buy off legislators.

When the focus of education shifts to attitudes, values, beliefs, behaviors, and worldview, instead of reading, writing math and history, then anyone with an agenda has access to American students in the classroom. And, with “school choice” they have access to your tax dollars to fund it.

I have written in the past about the Gulen Charter School Movement in Texas and Louisiana, and the close ties to people such as Karen Hughes, Bush Jr.’s communication director.

As you can hear in this video Ms. Hughes is very interested in promoting Harmony Science Charter Schools and accessing Texas tax dollars to create competition for public schools by funding the Gulen/Harmony charter schools.

What you may not know is that these charter schools have strong ties to Fethullah Gulen, a Turkish Islamist. As Frank Gaffney, founder of the Center for Security Policy wrote… “Their focus is to promote an increasingly Shariah-dominated Turkey.”

We found out during the 84th legislative session that Caprice Young was a policy advisor to Texans for Education Reform (now renamed Texas Aspires) and testified for the parent trigger bill, SB 14, during this 84th legislative Texas Senate Education  Committee Hearing.

She was VP for Education for the Laura and John Arnold Foundation and testified in favor of the 2013 parent trigger bill.

Caprice Young has been working for a California Gulen group.  Interesting to note the possible opportunity for parent trigger to convert Texas public schools to Harmony’s charter chain.

Did you know about the first Gulen charter school opened in DC this year? It was sponsored by Texas’ Harmony Schools, which works out nicely for making all those congressional contacts.

I had an interesting conversation with a Region 11 service center employee who told me one of the concerns with the charter school movement and in particular with the Gulen Harmony Math and Science Centers was the practice of “Replication.”
Did you know about the Federal Charter School Replication Program?

“The U.S. Department of Education’s Charter Schools Program has just announced the 2014 CSP Grants Competition for Replication and Expansion. This program is designed to assist non-profit charter management organizations, and other entities that are not for-profit entities, in replicating or expanding high-quality charter schools…”

As Anita Hoge clearly laid out for us…..

(3) No Child Left Behind Flexibility Waiver, (ESEA, Elementary and Secondary Education Act), that is re-training teachers to teach to Common Core.

This also allowed ALL children in public schools to be funded under Title I by changing the definition of who is poor or educationally deprived to anyone not meeting Common Core/College and Career Ready Standards. (Free and reduced lunch guidelines of 40% school-wide were dropped to 0%.)

These three important points control standards and testing, curriculum, and teachers with all public school children being funded under Title I.

‘Obama and Progressive Republican’s Equity in Education Plan‘ for our entire country:

So you decided, are you really okay with School Choice as defined by the Federal or State Government? As I see it…

Public schools are in crisis (As Diana West describes, the headline) but the “root crisis,” is they are failing because they are being set up to fail.

For those “Green” politicians just buying the narrative; School Choice must be defined as a mother, father or guardian who has the right to give their child the best education possible.

The vision to “fundamentally transform” education clearly laid out the pathway to Globalization is through “School Choice.”  Because with “choice” comes accountability through rules and regulations.

This Texas Mom says… NO!! My children are not “Human Capital” for the State or Federal Government!!

The books are quite explicit. Ted Sizer wrote a book in 2004, The New American High School, which laid out the vision with cites to books going back to the 70′s that the vision for Nationalizing Education was through “School Choice”

I ask again what I asked last week- Why are Republicans in Texas implementing the Progressive plan for education?

AS MY REPRESENTATIVE I ASK YOU- PLEASE REPRESENT ME AND DO NOT PASS GOV. ABBOTT AND LT. GOV. DAN PATRICK’S SCHOOL CHOICE AGENDA!!