STOP! You Can NOT do this to MY Children- ESEA, NCLB and now ESSA are Tactics

Background to get this article rolling…….

ESEA (Elementary and Secondary Education Act) passed in 1965 was a 35 page bill that gave federal Title 1 dollars to states for the education of economically disadvantaged students in America.

NCLB (No Child Left Behind) re-authorized ESEA passed in 2002 under George W. Bush. This set up APY (Adequate Yearly Progress) requirements that would have “all” students proficient  by 2014. As Dr. Patrick Huff explained…..

“President Bush made into law that by 2014 all students would be proficient on the test.  What most people missed was that proficient meant the students had to pass the test. In other words, by 2014 every stuent will pass the state test. What this resulted in was a gradual progression toward 100% proficiency that began after Congress passed the bill. The proficient percentages required were low at the start, but when they grew to 83% in Reading/English Language Arts and 75 % in math in 2011, schools began to fail in record numbers.  It is the percentages required for AYP in the subgroups that are the standards.  This is critical for understanding school accountability. For a school to make accountability it must meet standards (percentages in the subgroups) every year from the results of the school wide testing outcomes.”

Our traditional Public Schools have been set up to fail- intentionally. In the past students failed, not schools.

What we are seeing is a transformation in education where schools, not individual students are being held accountable.

When we talk about the “Shift” in Education it is transforming from an academic knowledge based education of Opportunity- (Equal Opportunity) where children were taught to read, write, do math and they know history well; to an Education of “Equity”- (Equal Outcomes). OBC (Outcome Based Education) focused on Attitudes,Values, Beliefs, Behaviors and changing a child’s worldview; for the good of the community. OBC is a template to fundamentally transform America.  Texas has been leading the way.

ESSA (Every Student Succeeds Act) re-authorization of ESEA passed and was signed into law by Obama in Dec. 2015.

Education in America is now legally locked in place.

Within the 1,061-page ESSA-  ESEA reauthorization bill, we know that it mandates a shift away from academics-  It is a clear shift to social and emotional learning (SEL), affective and non-cognitive attitudes, values, beliefs, behaviors and changing American students worldview.

Most people do not know that the National Universal Design for Learning (UDL Task Force) works to incorporate the principles of UDL into federal policy and practice initiatives.  More than forty national organizations joined together to recommend UDL legislative language for the current reauthorization of the ESEA now known as ESSA .

If you need proof that the Every Student Succeeds Act (‎ESSA‬) is the ‪”New” Common Core‬, which is not about teaching our kids to read, write and do math. It is about attitudes, values, beliefs, and behaviors! Just listen to testimony given during the debate on the U.S. House floor by Rep. Tim Ryan of Ohio.

The state and federal government has no place mandating and conducting, psychological profiling of our children.

In order to accomplish this transformation, there must be a clear shift from testing academic achievement of individual students to formative assessments and an individual profile, focused on competency and proficiency for the workforce.

One of my favorite writers on this topic is elementary teacher, mother and education writer, Emily Talmage from Maine. She recently wrote an important post titled… Our Schools Are Not Widget-Makers.  Please take the time to read her full article here.  Emily highlights comments by Rex Tillerson, head of Exxon Mobile, found in this article in Fortune and written about brilliantly here by Peter Greene:

“I’m not sure public schools understand that we’re their customer—that we, the business community, are your customer…What they don’t understand is they are producing a product at the end of that high school graduation…Now is that product in a form that we, the customer, can use it? Or is it defective, and we’re not interested?”

As Emily points out….

“And this, of course – in addition to the profits to be made through its implementation and all the digitalization and data collection it demands – is why “personalized” and competency-based learning has long been popular among members of the business community: it treats students – children – as products that can be managed like any other resource.”

In order for this to all work, parents have to buy into the narrative that school is all about preparing their precious child to be a product for the consumer (big business,) so the student can get a predetermined job based on competency in the workforce.

So, my question for parents is; do you see your children as being educated to be merely competent for the workforce and ‘Human Capital’ for the state and federal government and their public/private partnerships?

Or, is what made America great, actually true innovation and opportunity?

Are you okay with that?

If you did not know…. This type of education does have a history of failure. The economy will be destroyed because innovation and opportunity will be dismantled. It is how the red people, will equalized America in the world economy.

Alice Linahan on the Green, Yellow and Red People 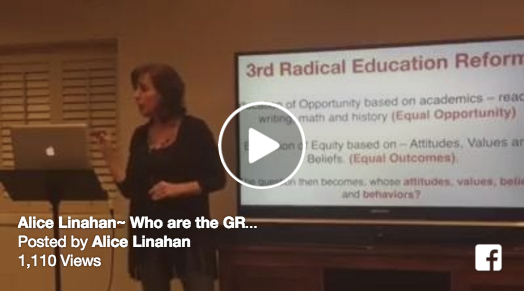 I was honored to speak in Dallas to the group- PEACE. I explained who the green, yellow and red people are.