Texas’ District of Innovation Initiative is NOT what you think…….

The latest Reform movement push by the Texas Association of School Boards (TASB) is an initiative called ‘District of Innovation’.

The District of Innovation concept, passed by the 84th Legislative Session in House Bill 1842, gives traditional independent school districts most of the flexibilities available to Texas’ open-enrollment charter schools.

RED FLAG!!! What this should tell you is, this is a push by the “Schools of Choice” movement, on both sides of the political aisle.

It is no surprise that HB 1842’s author is none other than Jimmy Don Aycock along with Rep. Harold Dutton Jr., Rep. Dwayne Bohac, Rep. Eddie Rodriguez, and Rep. Marcia Farney and sponsored by Senator Larry Taylor.

This is a bi-partisan push to collapse our traditional public school system and remove the power of locally elected school boards.

The description of HB1842 states… “Relating to public school accountability, including the intervention in and sanction of a public school that has received an academically unsuccessful performance rating for at least two consecutive school years and the designation of a school district as a district of innovation.”

Now, let’s look at the marketing of ‘Districts of Innovation’ by the Texas Association of School Boards.

“For years, Texas school board members and administrators have complained about the ever-increasing number of state mandates and prescriptive laws and bemoaned the continual erosion of local control. Now there is a realistic process for districts to do something about this. Take advantage. Investigate the possibilities and potential of becoming a district of innovation”.

Potential benefits of becoming a District of Innovation include:

So, on one hand, HB1842 is about public school accountability, including the intervention in and sanction of a public schools. And, on the other hand, it is marketing that school districts can get out of state mandates and around the Texas Education Code (TEC) to give back local control.

BEWARE!!  How is that possible?

Have you ever heard the concept of “Shared Learning”?

According to the non-Profit education organization “Raise Your Hand” (which Jimmy Don Aycock’s daughter, use to be a lobbyist for, an which was started by Mike Moses and former Lt. Gov. and State Senator Bill Ratliff, the father of former SBOE member and Microsoft Lobbyist, Thomas Ratliff, “Shared Learning” is key to the District’s of Innovation model of education. 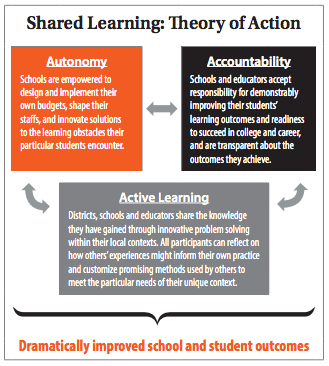 “Decades ago, in his classic study of why American high schools fail, respected education scholar Ted Sizer
documented the following phenomenon: If you run a school like an old-fashioned factory, where the principal,
teachers and students are hemmed in an on all sides by dozens of rigid one-size-fits-all rules and structures, “You
will get uneven goods.

Here is a little insight. Linda Darling Hammond is a key player in the Education Reform movement as Dannette Clark has clearly documented, who they are, and what their agenda is. In her article Name Names….

Yes, Theodore Sizer of CES is the same Ted Sizer mentioned in the Raise Your Hand document.

Through an organization she co-founded called the School Redesign Network, and through the National Equity Project/BayCES, Darling-Hammond has worked closely over the years with socialist, Deborah Meier, communist, Bill Ayers, and several ultra-liberal organizations, including the crooked and recently de-funded ACORN, to open new progressive schools and transform existing public schools into progressive indoctrination centers. This reform effort was once widely known as the ‘small schools initiative’ or ‘small schools movement’.

By the way, former Texas Lt. Governor Bill Ratliff sits on a National Board “Parents for Public Schools” with both Linda Darling Hammond and Deborah Meier.

Call me crazy, but, I am a little skeptical of the “Districts of Innovation” initiative.

As Anita Hoge has warned us over and over again…..

There were three major actions under the Obama administration, without legislative approval, to change two hundred years of traditional public education in the United States.
(1) The Common Core copyright, which created a national curriculum and national testing mandating that individual students meet individual standards (similar to the Obamacare individual mandate).
(2) Unlocking data ‘to flow’ through the Family Education Rights in Privacy Act, FERPA, which allows personally identifiable information on our children to flow to outside 3rd party contractors for research and curriculum development to match College and Career Ready/Common Core national standards. Which are NOW mandated because of the passage of the Every Student Succeeds Act (ESSA).
(3) No Child Left Behind Flexibility Waiver, (ESEA, Elementary and Secondary Education Act), that is re-training teachers to teach to 21st Century Learning/College and Career Ready/Common Core using the 4 Cs, Critical Thinking, Creativity, Collaboration, Communication. Much like what is called for in the Districts of Innovation, “Shared Learning”.
This is nothing new, they just keep changing the names so local school district will take the bite of the carrot the federal government is holding.
As my friend Mellany pointed out….
Listening to Dr. Luksik’s video from 1992, you would think that she is speaking about education reform today. Listening to the last 8 minutes is exactly what has happened under ESSA and how the federal government has fooled the states into believing that they are given more control. I would add it is also how the states are fooling the local school boards that they have control by becoming a “District of Innovation”.

Chapter 12.
Sec. 12A.002. AUTHORIZATION. (a) Subject to approval by the commissioner, a governing body may establish a multiple-campus innovation zone.

So, if the unelected Commissioner of Education Mike Morath,  has all the power to intervene and revoke the DOI status of a district,  based on assessments and accountability still yet to be established, does the local school board ultimately have control of the district?

Remember, Mike Morath is the same guy who is advocating that the Next Generation of Assessments and Accountability Commission recommend that Texas develop non-cognitive character standards into the Texas Essential Knowledge and Skills (TEKS).

Just listen in his own words…… 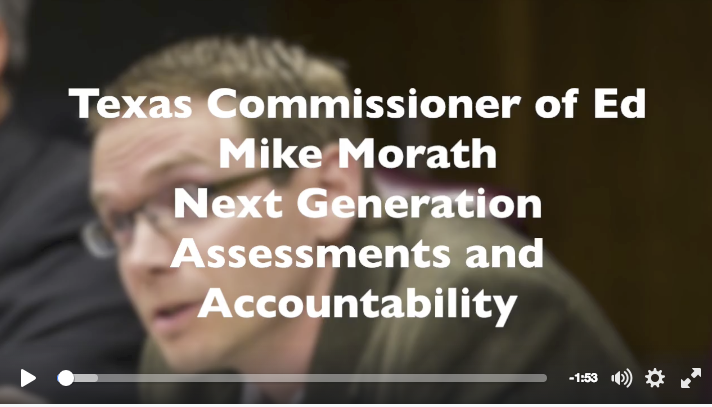