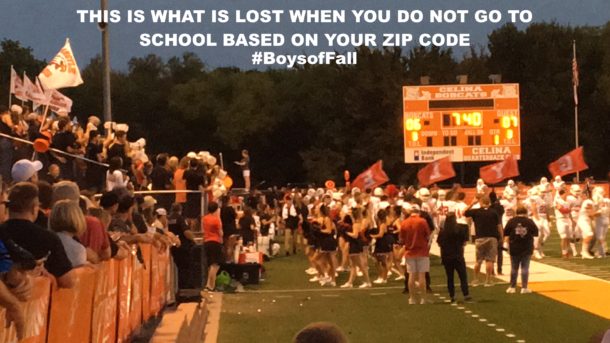 The Way to Save America~ MOMS, DADS and TEXAS HIGH SCHOOL FOOTBALL

And a little Kenny Chesney…..

This post is dedicated to my dear friend Kenard Thompkins. A young man whom I don’t agree with politically, but who, along with another dear friend, Pat Caddell, taught me that my battle is not always with those whom I do not agree with politically, but with the corruption and bureaucracy that is directly impacting my children and their teachers daily in their classroom.
As Kenard’s favorite Jay- Z quote goes….. “When the Grass is cut, the Snakes will show.”
Kenard and I do have one major thing in common, we both love Texas high school football.
I know this is crazy but, I think the answer to saving America may actually be Moms, Dads, and Texas High School Football. It has to do with Kenny Chesney’s song “The Boys of Fall”
The way to fight this battle is to bring people together as a community, it is not the politicians unless they are “Servant Leaders” like Scott Turner, who was a candidate for Speaker of the Texas House.
Scott actually knows a thing or two about the accountability of game film- it is the people.
As Scott Turner says, “America and Texas deserve so much more than a ‘containment mentality’.  Right now, local school district administrators have a ‘containment mentality,’ against the state and the federal government. As parents, I pray that after watching this short video below, you become motivated. “We have to protect our children and STOP them.”
Nothing brings a community together more than Texas High School football.
Whether you are that kid in the band who plays at halftime or the kid who is a cheerleader or on the dance team.
Everyone is there to WIN!! Kenny Chesney gets that.

Our children will no longer be that kid from Argyle, Celina or Keller, Texas. That kid who was a football star or a cheerleader or a drum major.

21st Century learning is shifting education away from a transmission of knowledge, that parents still expect from our schools to an emphasis on altering the students world-views, their values, attitudes, beliefs, and behaviors.

Therefore, the question must be… Whose values, attitudes, beliefs, and behaviors?

In addition, if we continue to believe the false narrative of government regulated “School Choice” and
College and Career Readiness; we will give the federal government via the state access to control the values, beliefs, behaviors, and worldview that is taught in our private schools.

“The way to fight back and take back our local schools and OUR Community is by reminding Texans and Americans just what behaviors are learned from a community wrapped around  “High School Football.” –
Dare I say, the AMERICAN way.

What is happening in education today is very dangerous. Do you realize if they collapse our traditional public school system what we will lose?  The very heart of our ‘Constitutional Republic’.  The ability to vote locally and control those who have access to the hearts and minds of our children. Parents, teachers, and coaches- those closest to America’s children being in control. The community is in control because they have a locally elected school board, the people can put in office and take out of office based on the education of the local children.

If Parents and Taxpayers actually stopped to pay attention. They would realize our K-12 traditional public schools are being set up to fail through AYP (Adequate Yearly Progress.)  “LOCAL COMPLIANCE DOES NOT = LOCAL CONTROL.”

In the Past Kids use to Fail – NOT SCHOOLS!

21st Century learning may look good and sounds good, but let me assure you, it is sending us down a “VERY DANGEROUS PATH.”

Like Loading...
7 years ago in News
Alice LinahanKenny ChesneyTexas High School FootballThe Lone Star Circle of CAREwomen on the wall